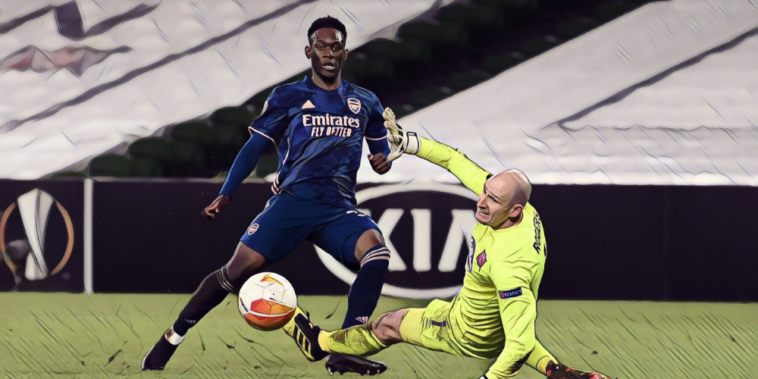 Mikel Arteta has confirmed that Folarin Balogun is ‘very close’ to signing a new deal with Arsenal as the forward prepares to commit his long-term future to the club.

Balogun’s current contract is set to expire at the end of the season with the Gunners in danger of losing one of their brightest prospects, the teenager having scored two goals in five senior appearances since being handed his debut earlier this season.

The 19-year-old’s situation had alerted several clubs both in the Premier League and across Europe, with Liverpool, Manchester City, Everton, Crystal Palace and RB Leipzig amongst those linked with a potential cut-price move.

Balogun is keen to secure more regular first-team football, but appears to have been persuaded having seen the progress of fellow academy graduates Bukayo Saka and Emile Smith Rowe under the guidance of Arteta.

Speaking ahead of Arsenal‘s Europa League quarter-final clash with Slavia Prague, Arteta confirmed an agreement was close that will see the forward pen a new long-term deal.

“We are very close,” Arteta told his pre-match press conference.

“We had to understand why he was thinking of leaving the club after he was raised here and then try to explain how involved he is going to be with the project and get his full commitment from the club.

“We will make it official when everything is done but I am very positive that he wants to stay.”

The news will come as a welcome boost to Arsenal with uncertainty remaining over the futures of fellow forwards Alexandre Lacazette and Eddie Nketiah, the duo both set to enter the final year of their contracts this summer.