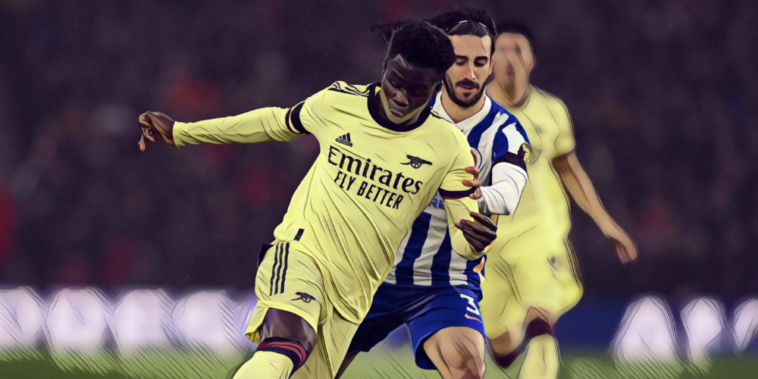 Mikel Arteta admits he was ‘concerned’ with Arsenal’s performance as the Gunners earned a fortuitous goalless draw at Brighton on Saturday evening.

Arsenal‘s three-game winning run came to an end following a scoreless stalemate at the Amex Stadium, though the north London side were dominated for much of the contest as Brighton squandered a series of opportunities.

Dan Burn headed Brighton’s best opportunity over the crossbar following a wonderful cross by Lewis Dunk, whilst both Neil Maupay and Leandro Trossard missed goalscoring chances for Graham Potter’s side.

Arteta believes his side improved after a poor showing in the opening 45 minutes, but believes there is much room for improvement for his side after the upcoming international break.

“In the first half we struggled to dominate the game,” he told Match of the Day. “They proposed a really aggressive game, we struggled to break the press and that caused us problems because there was a lot of transitions and one-on-one situations that we could not deal with.

“We improved a little bit in the second half and had a couple of open situations that could have been big chances.

“We managed to get a point today because we defended the last 15-20 metres of the pitch really well. I think for the rest there is a lot of things we have to get better at.”

Arteta admits aspects of his side’s showing made him ‘concerned’, criticising his player’s decision-making as they struggled to relieve and counter the pressure from the hosts.

“I was more concerned about the way we played. We didn’t make enough right decision, every time there was a duel where we could escape pressure and attack open spaces we came up short and against this structure we had to do better.”

Arsenal struck the post from Pierre-Emerick Aubameyang’s header in the first half, whilst Emile Smith Rowe saw a low effort saved by Robert Sanchez after a Gunners break.

However, opportunities were few and far between for the visitors and Arteta says his side did not deserve to secure all three points.

“[Aubameyang’s header] was probably the only open situation in the first half, and we were unlucky not to score it. I don’t think we deserved to win the game, we have to take the draw with the performance we had today and improve.”

The draw moves Arsenal up to ninth in the Premier League, with the Gunners now unbeaten in four league fixtures following a three-game winless start to the season.

There was also another clean sheet – the club’s fourth in five fixtures across all competitions – and Arteta is hopeful his side can continue building momentum ahead of their next league fixture against Crystal Palace on October 18.

“We have conceded one goal in the last five games which is really positive,” he said. “It is a really positive block of games that has helped us change the situation.

“We can now focus on the things we are doing well and work on the ones we need to improve.”