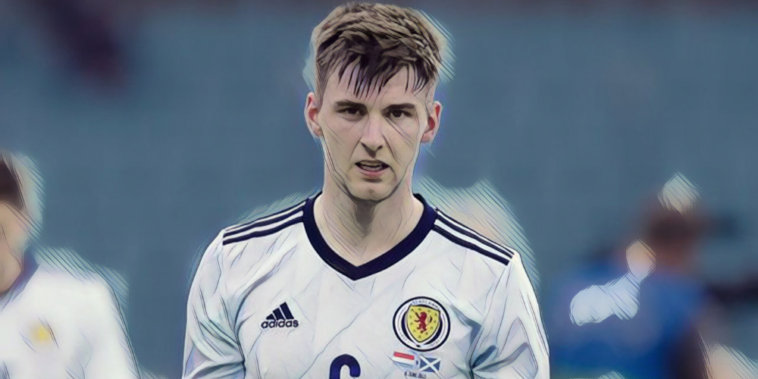 Kieran Tierney admits he is ‘touch and go’ for Scotland’s ‘big game’ against England at Euro 2020 on Friday evening.

Tierney missed Scotland’s opening fixture of the tournament with a calf injury and did not even travel to Glasgow with his teammates for the 2-0 defeat to the Czech Republic, with Steve Clarke’s side now facing a must-not-lose clash with England at Wembley as they bid to progress to the knockout stages.

The Arsenal defender is amongst the side’s most important players and his absence against the Czechs was a major blow, though the 24-year-old revealed he remains a doubt for Friday’s huge all-British clash as Scotland bid to make an impact in their first major tournament appearance for 23 years.

“50-50? It probably is, aye,” he said. “It’s just so unlucky because I worked so hard to get back from my knee injury. I came back quickly, played a few games. I don’t know if those few games caught up with me and I just got a wee niggle.

“The pain itself probably wouldn’t stop you playing. It’s if you played on it, it could get a lot, lot worse and you could get out for a lengthy time. You can’t risk it, not with calves.”

Tierney admits he was ‘gutted’ to miss Scotland’s Group D opener as he remained at the club’s base to continue his rehabilitation, with the defender insisting he is doing all he can to be part of Friday’s fixture.

“I was gutted. I was so down. I stayed back (in Teesside) and did rehab work. I was just so flat that day. It was the longest day. It was a horrible day.

“Watching the anthem was amazing but what I was feeling inside was terrible. I wanted to be there so much.

Tierney also discussed the reaction of the squad following their defeat to the Czech Republic, with Scotland impressing in spells but lacking quality in the final third of the pitch.

The full-back believes his side ‘need to believe’ ahead of their final two fixtures with England and Croatia, though insists there will be no lack of motivation from his side as they prepare to face their biggest rivals at Wembley tomorrow.

“Everyone in that changing room has had a bad result before. You can’t get too down. We had chances, as well. It’s just tournament football. We never got the result but we have two games left and you never know what can happen.

“There wasn’t much in it between the teams, I would say. We wanted to do better, we wanted a better result, we wanted a good start to the tournament.

“Unfortunately we didn’t but looking at the two teams, you need to fancy our chances. We are here for a reason. We need to believe in ourselves more, I think, as well.”

“England’s a big game. No doubt about it, there is no hiding it. They are a world class team as well. We are going down there and we are going to do our very, very best. Hopefully we can pull together a good performance.

“I don’t think there is one person in the dressing room that needs motivation to be honest. I wouldn’t worry what other people are saying.”

Read – Remembering the Euro 2000 Team of the Tournament

Read Also – Five of the most iconic Euros goals ever