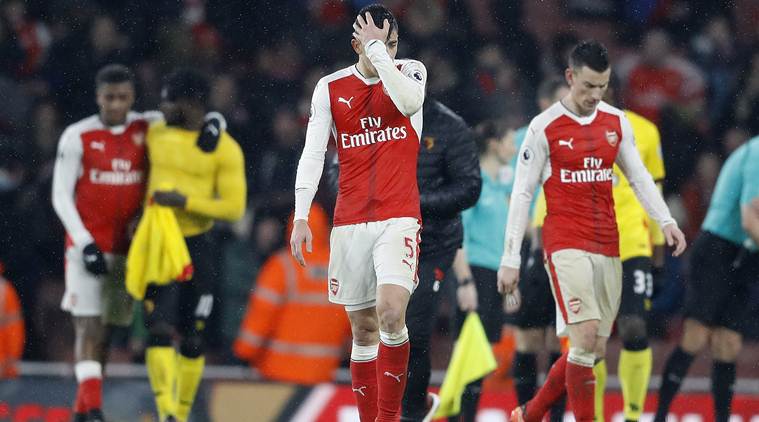 In his press conference for Saturday’s match against Hull City, Arsene Wenger stated the Premier League title is “never over” and Arsenal can still win it. How he has come to this conclusion I will never know. Then again, he has probably been using that line every season since Arsenal last won the Premier League in 2004.

For the past 13 seasons, Arsenal have been mediocre. Never pushing themselves but making sure they stay in the top four. The Gunners have finished in the top four for 20 consecutive seasons under Arsene Wenger. In that time they have won the Premier League three times, won the FA Cup six times and never won the Champions League. Wenger is always the first to say that Arsenal are challenging for the title when in reality they are challenging for a top four finish.

As long as Arsenal are in the top four, the board are happy because of the revenue they receive from the Champions League. Arsene Wenger is not under any pressure to win

the Premier League and that is where the mediocrity comes in.

A sensitive part of the season

During his pre match press conference, Arsene Wenger came out with this:

We have a big fight in the Premier League, a big game coming up in the Champions League, the FA Cup as well and we want to do well in all three competitions. This is a very sensitive part of the season.

This is yet another example of Arsene Wenger saying what he thinks people want to hear, without any end product. Couldn’t Arsenal have realised that they a “big fight in the Premier League” against Watford and Chelsea when they were incredibly poor and deservedly lost both matches?

As for the “big game” in the Champions League against Bayern Munich, well we all know how that’s going to end. If Arsene Wenger knows this is such a “sensitive part of the season”, then why didn’t he control himself in the game against Burnley, instead of pushing the fourth official and receiving a four-game touchline ban?

Arsenal’s only realistic chance of silverware this season is the FA Cup. They face non-league side Sutton United and that won’t be a walkover. Sutton have already defeated AFC Wimbledon and Leeds United. A Premier League giant killing would be the sweetest of them all.

Once again, Arsenal’s season is more or less over in February. This happens far too often. They crumble under the pressure in must win games and lose ground in the Premier League title race. Then Bayern Munich knock them out in the last 16 of the Champions League. Arsenal are so predictable.

Below are two of the main issues that Arsenal need to address:

For a team that haven’t won the Premier League in 13 years, Arsenal seem to think they are entitled to win matches. Bournemouth hosted Arsenal in early January. The final score was 3-3. Arsenal were 2-0 down within 20 minutes. It was as if Arsenal didn’t realise they were playing a game until the 70th minute when the comeback began. After the game, Arsene Wenger came out with the astonishing statement that Arsenal “refused to lose”. It was a match they should have won! Once again Arsenal just expected to turn up and take the three points. When Bournemouth scored twice in 20 minutes, it knocked them for six.

This arrogance occurs in all competitions. For example, when Arsenal played Preston North End in the third round of the FA Cup, goalscorers Olivier Giroud and Aaron Ramsey said they were “surprised” by Preston’s commitment, effort and the intensity they put into the duels. Why is that a surprise? Preston North End are a Championship side, playing at home against Arsenal. They are obviously going to put all their effort into beating the team in front of them. If Sutton United start well against Arsenal later this month, the Gunners might be in for another “surprise”.

In the Champions League against Anderlecht in 2014, Arsenal had to win

the match to book their place in the knockout stages. They were 3-0 up with half an hour to go. Job done, right? Of course not. The Gunners blew their three goal lead as the match finished 3-3. After the match, Anderlecht manager Besnik Hasi said: “Maybe Arsenal thought that they were superior at 3-0 and they could have fun with the public.” Even opposition managers can see the arrogance that Arsenal have and it spurs them on even further to get a result against them.

Almost every season, Arsenal will miss a chance to go top of the Premier League or lose/draw when their rivals do. It has already happened in the 16/17 season. When Liverpool and Chelsea drew in January, Arsenal lost to Watford. Arsenal might have really challenged for the Premier League earlier this season but successive away defeats to Man City and Everton derailed their efforts.

In my opinion, the only way things will change at Arsenal is if they finish outside the top four. Something radical has to happen in order for the board to take note and make some key alterations.