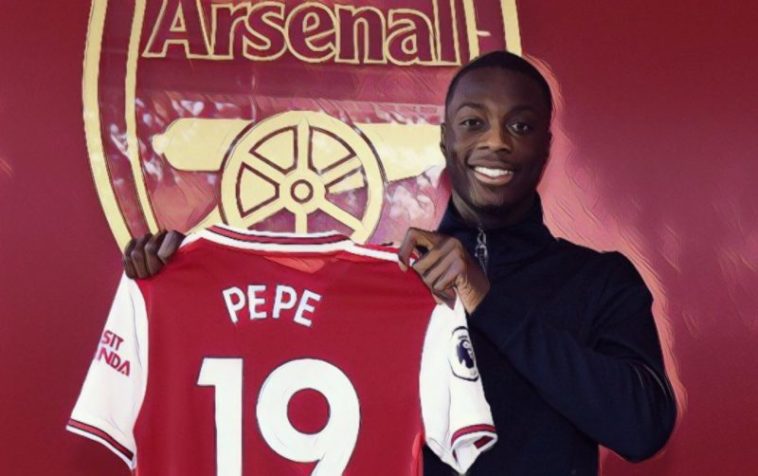 Arsenal have become the latest Premier League club to smash their transfer-record this summer, with the £72m arrival of Lille winger Nicolas Pepe announced yesterday.

Pepe has become the latest expensive acquisition to arrive at the Emirates, but who are the club’s previous big-money buys?

With veteran Petr Cech nearing the end of his stellar career, Arsenal entered the market last summer in pursuit of a new goalkeeper.

The club’s search led them to Bayer Leverkusen shot-stopper Bernd Leno, who moved to the Emirates in a deal worth £22m in June 2018.

The German international had developed a fine reputation in the Bundesliga, making over 230 appearances for Leverkusen and it was hoped he could become the club’s long-term number one.

After an indifferent start Leno grew in confidence throughout his debut season, with the goalkeeper’s popularity rapidly growing amongst the club’s fanbase.

Still just 27, he looks set to be a fixture at the club for seasons to come.

Arsenal have often been criticised in recent seasons for a lack of fight, and the arrival of tenacious Uruguayan Lucas Torreira was hoped to add some much-needed midfield bite.

Signed from Italian side Sampdoria for £26.5m in 2018, Torreira impressed in his debut season, becoming a fan’s favourite following some all-action displays.

The 23-year-old remains raw, but has shown he has the potential to develop into a key figure for the club.

Defensive issues have long haunted Arsenal, with their fragility having been a major reason for the club’s continued absence from the Champions League.

Unai Emery has attempted to rectify the club’s long-standing problem by investing in the future, signing highly-rated teenage centre-back William Saliba from Saint-Etienne.

The 18-year-old has emerged as one of the most promising talents in French football since his breakthrough, though he will remain on loan with the Ligue 1 side for the coming season as he continues his development.

A signing which caused great excitement amongst the club’s supporters, Barcelona star Alexis Sanchez joined Arsenal in a £32m deal in 2014.

The Chile forward made an immediate impact, scoring 16 Premier League goals in his first season and helping the club to FA Cup success, scoring in the final victory over Aston Villa.

He would add a second FA Cup two years later, again scoring in the final, one of 30 goals in all competitions in arguably his finest season at the club.

Sanchez would leave for Manchester United in January 2018, having scored 80 goals in 166 Arsenal appearances.

Another signing made with the intention of strengthening the club’s spine, Arsenal spent £34m to bring Borussia Monchengladbach midfielder Granit Xhaka to the Emirates in 2016.

The Swiss international had captained the German side, with Arsenal hoping Xhaka could bring personality to a side that had often been accused of lacking leaders.

Much-maligned in the early part of his career in North London, Xhaka’s influence has steadily increased in recent seasons, though he has perhaps not become the midfield general the club had hoped.

Fast forward three seasons, Mustafi has failed to justify his hefty price-tag, the centre-back having become a fierce target for critics following a series of error-prone performances.

His defending has often been calamitous, and a major reason behind Arsenal’s continued defensive woes. Unai Emery is believed to want to move on the 20-cap international this summer, should the club find a suitor.

A marquee signing that issued a real statement of intent, Mesut Ozil’s club-record signing from Real Madrid showed Arsenal were ready to compete again following some lean years after their move into the Emirates stadium.

In six seasons in North London the World Cup winner has mixed displays of brilliance with inconsistency, though he has helped Arsenal to three FA Cup successes.

The Lyon forward arrived in a club-record deal in 2017, the French forward signed to add firepower to the club’s forward line.

Lacazette scored just 94 seconds into his league debut, before firing a further 16 goals in all competitions in his first season at the club.

The forward struck up a strong partnership with Pierre-Emerick Aubameyang during his second season, the duo firing 50 goals between them as Arsenal reached the Europa League final.

A popular figure amongst the club’s fans for his work-rate and commitment, Lacazette was crowned as the club’s Player of the Year in 2018/19.

Having developed a reputation as one of Europe’s finest finishers during a prolific spell at Borussia Dortmund, Arsenal raided the Bundesliga to bring the Gabon international to the Emirates in January 2018.

Aubameyang’s impact was immediate, scoring 10 goals in his first 13 league appearances for the club after joining in the winter window. In his first full season, the forward scored 31 goals in all competitions, helping Arsenal to the final of the Europa League and winning a share of the Premier League’s Golden Boot award.

Blessed with lightning pace and a composed finisher, Aubameyang’s partnership with fellow frontman Alexandre Lacazette is a major reason for optimism in North London ahead of the new season.

Few had anticipated Arsenal would invest heavily in their attacking options this summer, even more so with reports over a restricted budget for Unai Emery.

However, the Spaniard has decided to smash the club’s transfer-record to sign Lille star Nicolas Pepe, who has emerged as one of the most talented attackers in French football in recent seasons.

The Ivory Coast international has attracted interest from across Europe after a prolific season with the Ligue 1 side, the 24-year-old having scored 22 league goals as Lille finished runners-up to Paris Saint-German.

Pepe’s signing represents somewhat of a coup for Arsenal given their lack of Champions League football, the club will hope the winger can inject a quality in the wide areas that will help them rejoin Europe’s elite.

Read: The 10 best Ajax products to play in the Premier League