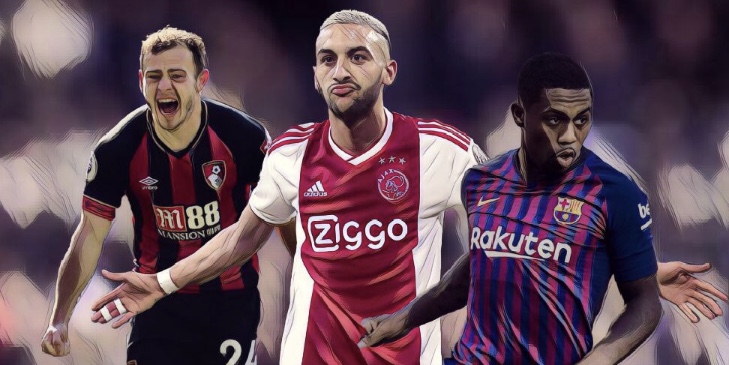 Arsenal’s pursuit of Wilfried Zaha is looking unlikely, with Crystal Palace refusing to budge on their valuation of the in-demand forward.

Unai Emery’s transfer budget is said to be restricted following the club’s failure to secure Champions League football, the Spaniard reported to have just £45m to spend before player sales.

Arsenal’s lack of resources could see them abandon their plans to bring the 26-year-old to North London, with Emery having to consider alternative signings as he bids to strengthen his squad.

The Scotland international has been tentatively linked with a move to the Emirates, following a stunning season for Eddie Howe’s Bournemouth side.

The diminutive winger provided 14 assists during a productive campaign, a tally only bettered by Chelsea star Eden Hazard within the Premier League. At 25, Fraser’s best years appear ahead of him and he could be available for a reasonable fee.

The Bournemouth star has entered the final year of his contract at the Cherries, which could persuade the South Coast club to cash in this summer.

Should Fraser complete a move to Arsenal, he would offer pace and directness in wide areas that is currently lacking in Emery’s squad.

The Barcelona star is available this summer having failed to establish himself at the Nou Camp, with the Spanish giants looking to sell their fringe players to fund big-money moves for the likes of Antoine Griezmann and Neymar.

The Brazilian was in-demand last summer, Barca hijacking Roma’s move for the player at the last minute and securing a £36.5m deal.

The move hasn’t quite worked out as hoped, though at just 22, Malcom has the potential for further development.

The winger would add a different option to Emery’s squad, though the Spaniard will have to see off reported competition from the likes of Tottenham and Everton to secure his signature this summer.

A player who has made no secret of his desire to play at the Emirates, the Ajax star looks set to leave the club this summer with a host of Europe’s top clubs circling.

The Moroccan starred as the Dutch side completed a domestic double and reached the Champions League semi-finals last season, scoring 21 goals in all competitions for the Amsterdam club.

Ziyech would likely cost in the region of £35m, and having proven himself on the European stage, a deal would make sense.

Ajax director and former Arsenal star Marc Overmars has said Ziyech can follow the likes of Frenkie de Jong in leaving this summer, and with the player having namechecked Arsenal as a dream destination, Emery should consider a move.

Another star of Erik ten Hag’s exciting Ajax team, Brazilian Neres has been strongly tipped for a move to the Premier League this summer after a series of impressive performances.

The 22-year-old joined Ajax from Sao Paulo in 2017 and has since scored 25 goals in 69 Eredivisie appearances, earning his first caps for the Brazil national team.

Having helped Brazil to Copa America success this summer, Neres reiterated his commitment to Ajax but a substantial bid could persuade the Dutch side to sell.

Liverpool, Everton and Manchester United have also been linked, and Arsenal would likely face serious competition if the winger becomes available this summer.

Having shone for Mexico during the 2018 World Cup in Russia, the PSV Eindhoven forward was tipped to move on to bigger things.

One year later, the 23-year-old is still with the Dutch club, though after another impressive Eredivisie season he could be a target for Europe’s elite once more.

Lozano has now scored 40 goals n 74 appearances for PSV since his switch from his native Mexico, whilst his versatility and ability to play across the front line is likely to appeal to potential suitors.

Purchases from the Netherland’s can often be a gamble, for every Van Nistelrooy and Suarez there has been a Kezman or Afonso Alves, though Lozano has already shown pedigree on the world stage.

Unlikely to cost a fortune, ‘Chucky’ could help bring an aggression and desire to win that has been lacking from a timid Arsenal side in recent years.

Emerging as one of the brightest talents in a new-look Dutch side, PSV Eindhoven winger Bergwijn has slowly developed since his emergence in 2016/17.

Full of pace and trickery, Bergwijn’s end product was originally a concern, but the talented youngster has shown serious progress.

The 21-year-old has increased his goal output in each season, with the academy graduate netting 14 league goals as PSV finished runners-up in the Eredivisie last season.

Alongside his 14 goals, Bergwijn also provided a further 12 assists in his most productive campaign yet for Mark van Bommel’s side. The Dutch have a long history of providing talented wide players, and Bergwijn could be ready for the step up to one of Europe’s leading leagues.

He has been linked with a return to Ajax, having left their youth set-up as a youngster following a fall-out with one of the club’s coaches, whilst Manchester United are also reported to be admirers.