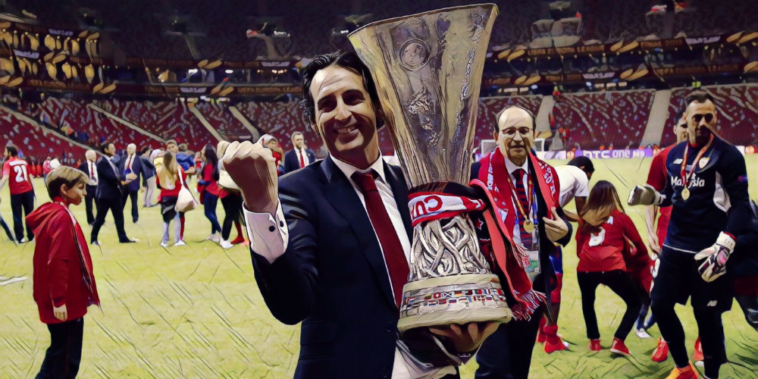 Unai Emery has been named as the new manager of Aston Villa, with the Premier League side having activated the Spaniard’s €6m (£5.25m) release clause at Villarreal.

Villa have turned towards an experienced coach following the dismissal of Steven Gerrard and Emery returns to the Premier League with a fine reputation.

The 50-year-old has won major trophies at Sevilla, Paris Saint-Germain and Villarreal, while he has compiled a quite remarkable record in the Europa League. Villa will hope their new head coach can lead the club back into Europe and fulfil the grand ambitions of the owners.

Following Emery’s appointment at Villa Park, we look back at his incredible record in the Europa League.

Emery reached the Europa League final for the first time after guiding Sevilla to the showpiece in 2013/14, with the Spanish side facing Benfica at the Juventus Stadium in Turin.

Sevilla had overturned first leg defeats to eliminate Real Betis and Porto in the knockout stages, before beating compatriots Valencia over two legs in the semi-finals to book a meeting with a Benfica side through to their second successive showpiece.

Emery’s side had only qualified for the tournament following Malaga’s suspension and Rayo Vallecano’s denial of a UEFA licence, though ended the season as Europa League winners following a shoot-out success.

The final itself proved a cagey affair with chances at a premium, as 120 minutes of action passed without a breakthrough before the lottery of a penalty shootout.

Sevilla scored each of their four spot-kicks, with goalkeeper Beto saving from Oscar Cardozo and Rodrigo. It was a third Europa League title for the Spaniards, who moved level with Juventus, Inter Milan and Liverpool for the most wins in the competition.

The holders returned to the final the following season after reaching the showpiece in impressive fashion, beating Borussia Monchengladbach, Villarreal, Zenit St. Petersburg and Fiorentina over two legs.

Sevilla faced surprise package Dnipro in the final, with the Ukrainians having upset the likes of Ajax and Napoli on their way to Warsaw.

It was Sevilla and Emery who claimed a record fourth Europa League title following a thrilling final clash, the momentum of the tie swinging both ways as the two sides exchanged five goals in an enthralling encounter.

Dnipro took an early lead through former Blackburn forward Nikola Kalinic after just seven minutes, before quick-fire goals from Grzegorz Krychowiak and Carlos Bacca turned the final around and put the Spaniards ahead.

Ruslan Rotan’s free-kick levelled the scores once more, before Bacca proved the hero with his second of the evening. His goal secured Sevilla a place in the Champions League and ensured the Spanish side became the first team to defend the trophy since its rebranding in 2009.

Emery guided the Andalusians to a hat-trick of Europa League titles during the 2015/16 season, as Sevilla overturned a half-time deficit to beat Liverpool and win a third trophy in succession.

Liverpool had been buoyed by Jurgen Klopp’s mid-season arrival as manager and were seeking both major silverware and Champions League qualification. The Reds got off to the perfect start, as Daniel Sturridge’s brilliant outside-of-the-foot finish provided the Premier League side with a lead at the break.

Klopp’s side were rocked just 17 seconds after the restart, however, as Kevin Gameiro turned in Mariano Ferreira’s cross to bring the holders level.

Sevilla dominated the second half and took the lead through Coke’s crisp finish, before the midfielder put the result beyond doubt with a second to enhance Emery’s reputation as a Europa League specialist.

Emery was appointed as Arsenal manager following the departure of club great Arsene Wenger, having enjoyed a brief spell at Paris Saint-Germain upon leaving Sevilla.

His first season with the Gunners saw him once again make an impression on Europe’s secondary competition, as he lead the north London side to an all-Premier League meeting with Chelsea in Baku – the first ever final meeting between two teams from the same city.

Emery was unable to repeat his previous exploits as Arsenal crashed to a comprehensive defeat however, with Eden Hazard in sparkling form on his final appearance for Chelsea before moving to Real Madrid.

The Belgium international scored twice in the second half to add to goals from former Arsenal forward Olivier Giroud and Pedro, with Alex Iwobi’s effort little consolation as Emery tasted defeat in the Europa League final for the first time.

Emery became a four-time winner of the Europa League in 2020/21, as Villarreal came out on top following a marathon penalty shootout against Manchester United.

Villarreal started the final as underdogs against the Premier League side, but took a first-half lead through Gerard Moreno as the forward turned home his seventh goal of the Europa League season from Dani Parejo’s free-kick.

Edinson Cavani brought the sides level after the break, with the two teams unable to be separated across the 120 minutes of action in Gdansk.

What followed was the longest ever shootout in the final of a UEFA competition, as all 20 outfield players converted their spot-kicks in a show of nerve. Villarreal goalkeeper Geronimo Rulli then converted his effort before saving from fellow shot-stopper David de Gea, as the Spanish side won the first major trophy in their history

Villarreal became the first side to win on their first appearance in a European final since Shakhtar Donetsk in 2008/09, while Emery surpassed Giovanni Trapattoni to become the first coach to win the UEFA Cup/Europa League on four occasions.