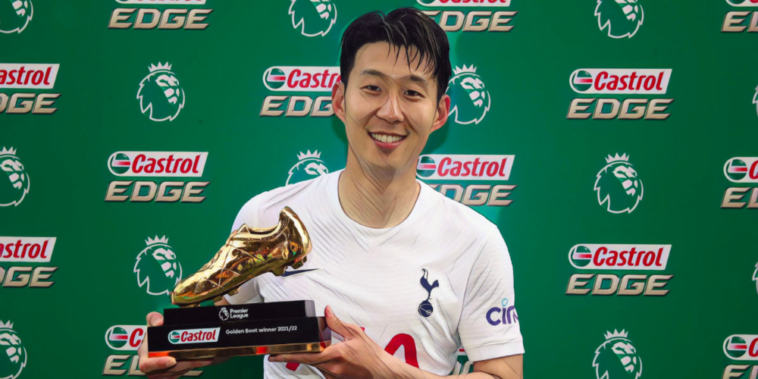 Europe’s finest forwards have been in the goals once again this season and following the conclusion of the 2021/22 campaign we’ve decided to look at the leading scorers from across the major leagues.

Here are the leading scorers from each of Europe’s top five leagues.

For a fifth time the Premier League’s Golden Boot was shared this season, as Mohamed Salah and Son Heung-Min finished level on 23 goals for the campaign.

Salah’s award was the third of his career with only Thierry Henry having now won more than the Egyptian, who began the season in scintillating form to be named as the FWA Footballer of the Year.

The 29-year-old also led the Premier League for assists (13) to win the Playmaker Award, becoming just the fourth player – after Andy Cole, Jimmy Floyd Hasselbaink and Harry Kane – to lead the league for both goals and assists in the same season.

"Last year, losing to Kane in the last game was pain for me!"

"I said next year I'm going to win both, golden boot and assists."

This is the mentality that sets @MoSalah apart 😤

Son also made history this season as the first-ever Asian winner of the Premier League’s Golden Boot, following a career-best campaign for the South Korean at Spurs.

The 29-year-old became the first player, aside from Harry Kane, to finish as the club’s leading scorer since Emmanuel Adebayor in 2013/14.

He scored twice against Norwich on the final day of the season to level Salah at the top of the goalscoring charts, remarkably winning the Golden Boot without scoring a single penalty.

Ciro Immobile was the leading scorer in Italian football once again, winning the Capocannoniere for the fourth time in his career.

Immobile has scored prolifically since signing for Lazio in 2016, adding to his leading scorer accolade won at Torino in 2013/14 with another three awards.

The 32-year-old now trails only Gunnar Nordhal (5) for Capocannoniere accolades and finished ahead of Dusan Vlahovic and Lautaro Martinez to win the award in 2021/22.

27 goals on the season and his 4th time being Italy’s top goalscorer 👏 pic.twitter.com/6P3uTZz3jj

It’s now 150 goals in just 205 league appearances for Lazio for Immobile, who is now just six goals away from reaching the all-time top 10 goalscorers in Serie A history.

Karim Benzema’s brilliant season has him as the odds-on favourite for the Ballon d’Or, with the Real Madrid forward having averaged almost a goal-per-game to help his side to a La Liga and Champions League double.

The 34-year-old has elevated his game to new levels in recent campaigns and finished as Spain’s leading scorer for the first time this season, netting 27 goals to finish comfortably ahead of Iago Aspas (18) and Vinicius Junior (17).

Benzema also scored 15 goals to finish as the Champions League’s leading scorer as Carlo Ancelotti’s side were crowned champions of Europe, his haul the joint-third most prolific individual season in the competition’s history.

Players to win the Pichichi trophy and the Champions League Golden Boot in the same season during the #UCL era:

All roads appear to lead to Benzema being declared the world’s finest footballer later in 2022.

For the fourth consecutive season Kylian Mbappe has finished as Ligue 1’s leading scorer, with the Paris Saint-Germain forward scoring a hat-trick on the final weekend of the season to finish ahead of Wissam Ben Yedder.

Mbappe is now just one accolade behind the record of five shared between Carlos Bianchi, Delio Onnis and Jean-Pierre Papin and will have the chance to make history next season after turning down Real Madrid’s advances signing a new contract at PSG.

He is also now just 29 goals behind Edinson Cavani’s club-record of 200 goals for the Parisians, a realistic target for next season given the prolific form he has showed in recent campaigns.

The Poland international remains the best out-and-out goalscorer in world football right now and ended the season top of the rankings in Germany for a fifth straight season and seventh time overall – levelling Gerd Mullers’ record for Kicker-Torjägerkanone awards.

The 33-year-old has incredibly scored 40+ goals in all competitions in seven successive seasons for Bayern Munich, though his reign as Germany’s finest forward could come to an end this summer after expressing a desire for a new challenge.

Another season, another Golden Shoe for Lewy. 🤜🤛 pic.twitter.com/cUVlDaygAJ

Should he depart, he will leave as the league’s second-highest scorer of all time behind the aforementioned Muller, having netted 312 goals in 384 appearances for Borussia Dortmund and Bayern.