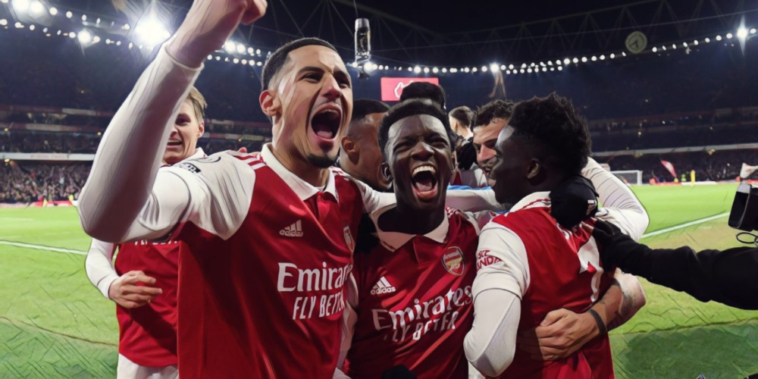 Arsenal are top of the Premier League table and underlined their title credentials with a thrilling win against Manchester United last weekend.

The Gunners were not expected to challenge this season but have produced a stunning first half of the campaign, with Mikel Arteta’s side five points clear at the top with a game in hand on their closest challengers.

It has been a remarkable run of consistency from the north Londoners who have become just the fifth team in Premier League history to reach 50+ points after 19 games. Here are the five teams to have achieved the feat.

Arsenal are the latest side to have reached 50 points at the half-way stage, following a stunning start to the season which has led to an unexpected title challenge.

The focus for Mikel Arteta’s side had been on a return to the Champions League after a six-season absence, but attentions have now turned towards the Premier League title as the Gunners look to be crowned champions for the first time since 2003/04.

Arsenal have dropped just seven points so far this season, beating Manchester United, Spurs (twice), Liverpool and Chelsea in a demonstration of their credentials. The summer arrivals of Oleksandr Zinchenko and Gabriel Jesus have added title-winning experience from Manchester City, while William Saliba has been a revelation at centre-back since his return from a loan spell at Marseille.

With the likes of Martin Odegaard, Bukayo Saka and Gabriel Martinelli all improving with each performance, Arsenal have the foundation of a side that can compete at the top of the Premier League for several seasons to come.

It’s been so far so good for Arsenal this season, who have a healthy advantage over Manchester City at the top. The two have not met in the Premier League this season and those two fixtures could be decisive in the destination of the title.

Liverpool are the only side to have reached 50+ points at the halfway stage and to have NOT been crowned champions.

Jurgen Klopp’s side finished as runners-up despite recording a then-club record 97 points for the campaign, the third-highest total in the history of English football’s top flight and the highest ever totalled by a team without winning the title.

The Reds’ success was built on an unbeaten home record, in what proved a fascinating title race with Manchester City. Liverpool won each of their last nine games in a flawless finish to the season, but City’s own winning run – a sequence of 14 consecutive victories – saw the title head to the Etihad as the defending champions finished a point ahead of Klopp’s side.

John Stones on the clearance vs @LFC: "In those big games, when something like that happens, you can only look back on it and feel proud. That moment is right up there. My thought process was: I'm taking everything here!"#MCFC | #ManCity pic.twitter.com/smlqRZuxCA

The sliding doors moment came in the fixture between the sides at the Etihad, as City required some goal-line heroics from John Stones to secure a 2-1 win which ultimately proved decisive.

City went on to complete English football’s first domestic treble after lifting both the League Cup and FA Cup, while Liverpool found significant consolation for their Premier League agony after beating Tottenham to win the Champions League.

Jose Mourinho’s arrival at Chelsea ushered in a new era in the Premier League, as the big-spending Blues became the division’s dominant force.

Mourinho’s first season saw Chelsea crowned champions for the first time in 50 years, conceding an all-time record low of just 15 goals in 2004/05. The champions flew out of the traps the following season, winning each of their opening nine games and 20 of their first 22 fixtures.

Chelsea became the first team to beat all 19 opposition sides in a Premier League season and wrapped up the title with a convincing 3-0 win against nearest challengers Manchester United in April.

No side has matched Chelsea’s run of nine consecutive wins to open a campaign in what remains the strongest start to a title defence in Premier League history. Mourinho’s men ended the campaign on 91 points and with a second successive Premier League crown.

Liverpool bounced back from their title disappointment in 2018/19 with an incredible season the following campaign, as the Reds ended their 30-year wait to be crowned champions of English football.

Jurgen Klopp’s side recorded the best-ever start to a season in the history of Europe’s top five leagues, having compiled a record of 26 wins and one draw from their opening 27 fixtures. Liverpool matched the Premier League records for most wins (32) and consecutive wins (18), with their first defeat of the season – at Watford in February 2020 – ending a 44-match unbeaten run in the league.

That run remains the second-longest streak in English top-flight history, behind the 49 games set by Arsenal’s Invincibles between May 2003 to October 2004.

Liverpool ended the season 18 points clear of Manchester City at the top of the division, having at one stage held an all-time record 25-point advantage at the top. No side has ever been crowned Premier League champions earlier than the Reds in terms of games played, who secured the title with seven games of the season still remaining.

Manchester City wrote their name into the history books during a record-breaking 2017/18 campaign, as Pep Guardiola’s ”Centurions’ swept all before them in one of the most memorable seasons in Premier League history.

Guardiola’s side lost just twice during a season in which City reached new standards, their 2017/18 vintage regarded, by some, as the Premier League’s greatest ever side.

Gabriel Jesus secured their history-making moment in the final seconds of the Premier League season, as his stoppage-time winner secured a 1-0 win at Southampton and saw City become the first top-flight team to reach 100 points in a season.