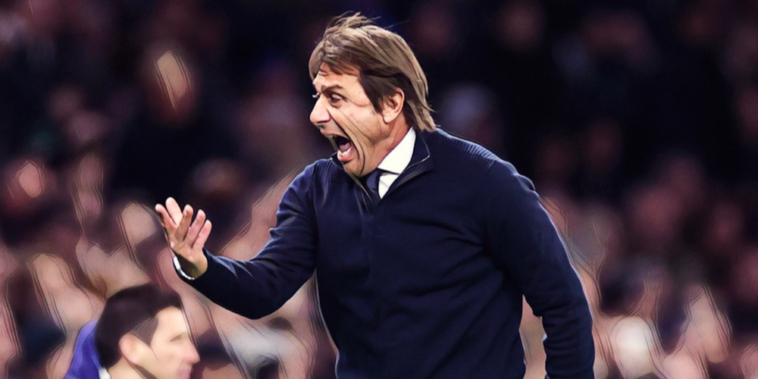 Antonio Conte clinched his first league win as Tottenham Hotspur boss, as the north London side came from behind to beat Leeds United 2-1 at home on Sunday.

In a cagey opening, it was the injury-stricken hosts who were by far the better team, with that strong start ultimately rewarded just before the break as Daniel James prodded home from close range, the Welshman netting his first goal for the club after some excellent work down the left from Jack Harrison.

The hosts had once again failed to register a shot on target in that first-half, although they almost instantly drew level after the break, Harry Kane’s league woes in front of goal continuing as he saw his effort agonisingly strike the post from Illan Meslier’s save.

In a frantic start to the second-half James then saw an effort tipped round by the post by Hugo Lloris, before Heung-min Son’s deflected effort struck the crossbar, as Spurs eventually dragged themselves level through Pierre-Emile Hojberg’s left-footed strike.

The home side had been much improved after the interval and were rewarded with a second goal soon after, Spain international Sergio Reguilon reacting quickest to turn home on the rebound after Eric Dier’s deflected free-kick had struck the post.

That proved to be the end of the drama, in truth, as the home side hung on for their first Premier League win under Antonio Conte, and speaking after the match, the Italian admitted his side were second best in all areas in the opening exchanges.

“In the first half, we struggled a lot. Physically, tactically and in our intensity we struggled,” he told Sky Sports. “I think in the second half we changed things and we wanted to play with the same intensity as Leeds.

“Before the game I was a bit afraid to know after three weeks the physical condition of the players. If they’d be able to play for the full 90 minutes with the intensity of the second half.

“I am very pleased, in the second half we deserved to win, we created many chances to score.

“I said to my players this is a point to start. If we want to build on this.”

There were boos heard as the players headed for the tunnel at the break after an underwhelming first-half display, though the former Chelsea boss was impressed with his side’s reaction in the second 45.

“The feeling of the crowd depends on us. In the first half we didn’t play well, we lost many tackles. Maybe to concede the goal in the last minute of the first half was good.

“At half-time the players showed me they could win this game.

“We won the game, we deserved to win. We played attractive football and the crowd was with us.

“We have the confidence, it’s a great feeling. We want to keep changing, we want to change everything.”