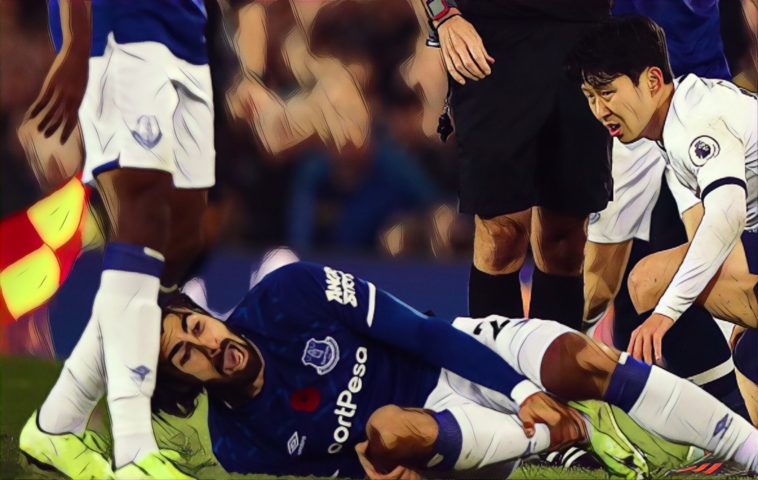 Everton’s Andre Gomes underwent surgery after suffering a horror ankle injury in the club’s 1-1 draw with Tottenham at Goodison Park.

Cenk Tosun’s stoppage-time equaliser rescued Everton a point on Merseyside, though the result was overshadowed following a horror injury to midfielder Gomes.

The Portugal international went down under a innocuous looking challenge from Son Heung-Min, but the Tottenham Hotspur forward was sent off and looked visibly distressed after the seriousness of the injury became apparent.

Gomes received extensive on-field treatment for his injury – a fracture-dislocation to his right ankle – which Everton revealed would require surgery, but the club have now confirmed that the 26-year-old’s operation was a success.

“Everton can confirm Andre Gomes underwent surgery to repair a fracture dislocation to his right ankle and the procedure went extremely well,” a statement on the club’s official website read.

This is simply a trip. He tries to bring him down by clipping his back leg and it’s a yellow card offence that you see game after game after game. pic.twitter.com/6SgzsUiu9J

“The Portugal international, who sustained the injury in yesterday’s Premier League fixture with Tottenham, will now spend some time recovering in hospital, before returning to USM Finch Farm [Everton’s training ground] to start his rehabilitation under the guidance of the club’s medical staff.

“The 26-year-old is expected to make a full recovery.

“On behalf of Andre, the club would like to thank all Everton supporters and members of the wider football family for the overwhelming messages of support we have received since yesterday’s match.”

A fracture-dislocation is a severe injury in which both fracture and dislocation take place simultaneously, and immobilisation must be longer that a simple dislocation to permit healing of the fracture.

The chances for permanent stiffness or disability are also greater than it is for an uncomplicated dislocation or fracture. No timescale of a potential return has yet been indicated, though Gomes is set to spend a significant spell on the sidelines.

See Also: Premier League explain why Son was sent off for his challenge on Gomes