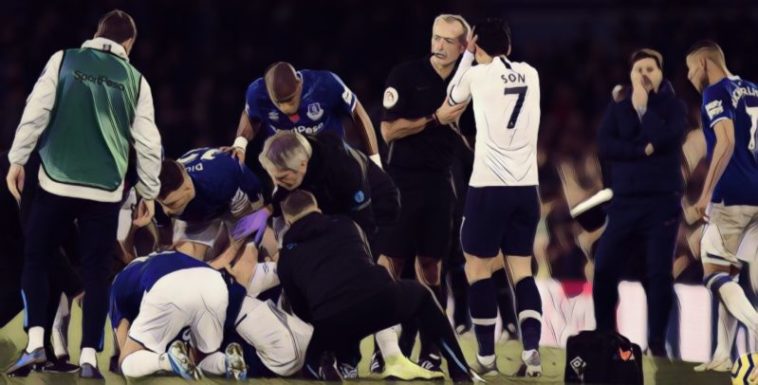 Everton and Spurs early season struggles continue after they played out a low quality 1-1 draw at Goodison Park earlier today.

Marco Silva and Mauricio Pochettino’s sides started the game in 17th and 13th place respectively, and with that in mind it was no great surprise that the opening 45 was a turgid affair, short of any quality or intensity from either side.

Finally, around the hour mark the game began to come to life with Brazilian attackers Richarlison and Lucas Moura both missing chances for their respective sides.

Just a few minutes later Spurs would take the lead when Dele Alli pounced on a mistake from former Arsenal man Alex Iwobi in midfield and finished smartly past England teammate Jordan Pickford.

Alli was once again in the spotlight soon after when VAR adjudged he had not handled the ball in the area despite checking 427 times and the footage clearly showing he had touched the ball with his hand whilst it was in an unnatural position.

Sadly though most of the talk after the game will not be about VAR’s inadequacies, but rather a horrific injury sustained by Everton midfielder Andre Gomes after a fairly innocuous looking challenge from Son Hueng Min.

Due to the severity of the injury 12 minutes of injury time was signaled, and with the home crowd urging them on The Toffees found an equalizer via a fine header from substitute Cenk Tosun.

Everton equalise after Gomes’ horror injury.@Carra23: “That one’s for you, Andre Gomes" pic.twitter.com/B7W8uuuOsy

Spurs goalscorer Alli spoke to Sky Sports and revealed just how badly affected Son has been by his role in Gomes’ horror injury.

“Didn’t want to look too much at what happened. I want to send best wishes,” Alli said.

“Son is devastated and in tears. It’s not his fault. Son is one of nicest people you’ve ever met. He can’t even lift his head up, he’s crying so much.

“The injury does play on your mind but you have to stay professional.

“We switched off for a second and they scored.

Last seasons Champions League finalists Spurs remain in the bottom half after today’s draw, and Alli insisted that his side must keep believing that they can turn their poor early season form around.

“We have to keep believing as a team. The quality will come through,” he added.

Read: What the scapegoating of Dele Alli says about the state of modern punditry

Read: Tweets of the Week: Xhaka’s ‘apology’, three points for a cup win, scenes in Newcastle