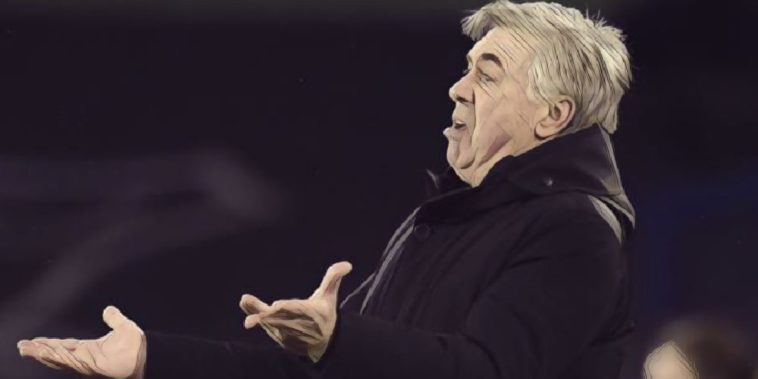 Everton boss Carlo Ancelotti is said to be unconvinced by current centre-back Mason Holgate, as the Italian instead plots a move for Napoli ace Kalidou Koulibaly.

While the Toffees’ European qualification hopes have suffered of late due to a real injury crisis, some shaky defensive displays have also been key in dropping needless points, with Holgate, in particular, under-fire for his erratic showings.

The Englishman produced an error-strewn performance in the 2-2 draw with Tottenham Hotspur last month, as well as being at fault for Ollie Watkins’ opener in the 2-1 defeat to Aston Villa at Goodison Park at the start of May.

Such underwhelming displays have not only dented the club’s Europa League ambitions, but also perhaps curtailed a previously promising career at the club for the centre-back, Ancelotti now seemingly eyeing up a replacement.

As per Football Insider, the legendary Italian manager is said to be ‘not totally convinced’ by Holgate and does not believe the current centre-back combinations work, with Napoli’s Kalidou Koulibaly being eyed up ahead of a potential move.

The Everton boss has struggled to name a consistent centre-back pairing this season, partly due to injury, with the likes of Yerry Mina, Michael Keane, Ben Godfrey and Holgate all having been heavily rotated this term.

The report suggests that while the former AC Milan manager likes Holgate’s versatility to play at right-back, as well as in central midfield, he is seemingly willing to offload the player to raise funds in order to pursue Koulibaly, despite the 24-year-old having only recently signed a new five-year deal on Merseyside.

As for the Senegal international – who worked under Ancelotti in Naples during the 2018/19 season – he has been one of the most sought-after defenders in world football in recent seasons and has featured 26 times so far this term in Serie A, although will likely command a hefty fee for a player soon to turn 30.