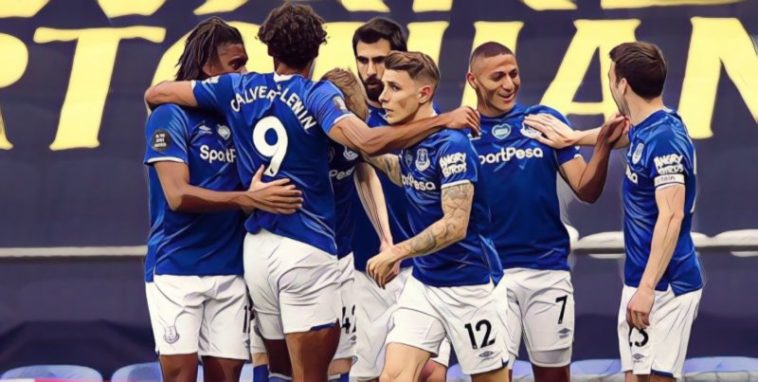 Carlo Ancelotti has hailed his side’s ‘spirit’ after Everton moved closer to the European places with a 2-1 victory over Leicester at Goodison Park.

Everton continued their unbeaten restart to the Premier League season with a hard fought victory over the third-placed Foxes on Merseyside, goals from Richarlison and a controversial Gylfi Sigurdsson penalty moving the club within two points of seventh-placed Arsenal.

Leicester pulled a goal back in fortuitous circumstances as Mason Holgate’s clearance deflected in off Kelechi Iheanacho, but the home side held out to boost their hopes of securing continental qualification.

Speaking following the clash, Ancelotti said he was pleased with his side’s display and has urged his team to continue their momentum when they face a ‘difficult’ trip to Tottenham on Monday night.

”It was difficult, so difficult second half because we played against a team that is so strong with quality. We started well and got 2-0 up and after that thought more to attack than to defend, but this is normal because the three points were very important.

“The spirit of the team is really good. We are focused and motivated. We have a really difficult, but a really exciting game against Tottenham so we have to be ready there.”

Ancelotti added that he hopes his side can remain in the race to secure European football throughout the Premier League’s run-in, with just four points separating seven sides in a tightly contested division.

“There are a lot of teams involved. We are happy to be involved and would like to be so until the last minute of the last game.”