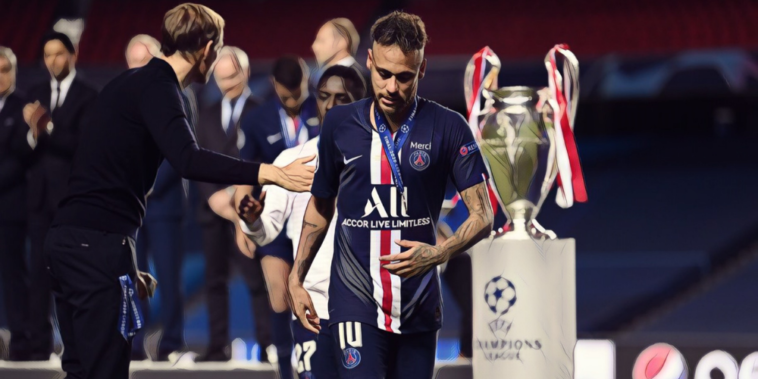 Paris Saint-Germain have enjoyed the most successful period in the club’s history over the past decade, a side once considered underachievers catapulted into the elite of world football following a billionaire takeover.

The huge finances provided by owners Qatar Sports Investments has seen the capital club establish themselves as France’s dominant force, winning seven of the past eight league titles and providing Ligue 1 with a side capable of competing with Europe’s elite from both a financial and competitive view.

Almost a decade on from a transformative takeover the Champions League remains an unfulfilled holy grail for the Qatrai ownership, though PSG have perhaps never had a greater chance of success than this season.

Victory over last season’s final conquerors Bayern Munich in the first leg of their quarter-final tie was assured last week, with the Parisians possessing a one-goal advantage and three away goals ahead of a return with the holders.

Robert Lewandowski’s absence through injury further boosts their hopes and this could be the season that PSG finally conquer Europe.

Ahead of the return fixture, we look back at PSG’s record in the Champions League since 2011.

PSG returned to the Champions League for the first time in eight seasons during the 2012/13 campaign, having finished as runners-up to shock champions Montpellier the previous season.

Their first campaign amongst Europe’s elite under the new ownership proved a positive one, qualifying for the knockout stages in comfortable fashion after winning five of their six group stage fixtures.

Valencia were beaten 3-2 on aggregate in the last 16, including an away win at the Mestalla, before facing Spanish opposition once more after being drawn against Barcelona in the quarter-finals.

The first fixture ended in a thrilling 2-2 draw at the Parc des Princes, before a 1-1 draw in the return saw PSG agonisingly exit on away goals, Pedro’s late equaliser securing Barcelona’s passage to the last eight.

PSG reached the quarter-finals for the second successive season in 2013/14, only to be eliminated on the away goal ruling once more after squandering a two-goal advantage against Chelsea.

Heading into the tournament as Ligue 1 champions, PSG once again topped their group before thrashing Bayer Leverkusen 6-1 over two legs in the first knockout round.

Laurent Blanc’s side looked to be on course to reach the semi-finals after beating Chelsea 3-1 in France, but a 2-0 defeat at Stamford Bridge – sealed with a Demba Ba goal three minutes from time – saw them crash out in dramatic fashion once more.

The semi-finals proved a bridge too far once again during the 2014/15 season, as PSG were beaten by eventual winners Barcelona in comprehensive fashion in the last eight.

Laurent Blanc’s side had met the Spaniards in the group stages with each side securing a victory apiece, PSG finishing as runners-up before avenging the previous season’s defeat to Chelsea in the last 16.

The two sides could not be separated after 180 minutes of action over two legs, before Eden Hazard’s penalty in extra-time at Stamford Bridge looked to have secured PSG’s exit.

Thiago Silva’s dramatic late goal took the Parisian’s through on away goals, though they were beaten in both legs against Barcelona in the next round to bow out 5-1 on aggregate.

For the fourth season in succession PSG failed to progress beyond the last eight, suffering defeat to Manchester City in the quarter-finals in a meeting between two sides whose fortunes had been transformed by Middle Eastern investment.

PSG finished as runners-up to holders Real Madrid in the group stages before being paired with Chelsea for the third consecutive campaign, winning both fixtures to progress 4-2 on aggregate.

The first leg with Manchester City resulted in a pulsating 2-2 draw at the Parc des Princes, before Kevin De Bruyne scored the only goal of the game in the return to send PSG out in the last eight.

Arguably the most dramatic Champions League exit of all time and one of the greatest ever European ties, PSG’s 2016/17 last-16 clash with Barcelona remains etched into the competition’s folklore.

PSG had laboured through the group stages to finish as runners-up to Arsenal, their reward a meeting with Barcelona in a huge knockout stage tie.

The first leg saw PSG produce one of their finest Champions League performances to thrash the Spanish giants 4-0 at the Parc des Princes, a first leg lead no side had previously ever squandered on this stage.

What followed was an unfathomable comeback in Catalonia however, as Barcelona trailed 5-3 on aggregate with just seven minutes remaining before mounting an improbable fightback, Sergi Roberto’s 95th-minute goal sealing the Spaniard’s progress in a Champions League classic.

If PSG had suffered scars from their inexplicable collapse the previous season, there were few signs shown as they enjoyed a remarkable 2017/18 group stage campaign.

The French champions scored a record-breaking 25 goals across their six fixtures, including thrashing Celtic 5-0 and 7-1 in their two fixtures with the Scottish side.

Despite qualifying as group winners, PSG were paired with a Real Madrid side seeking a third consecutive Champions League crown.

The holders proved too good over two legs in the last 16, winning 5-2 on aggregate on their way to a third trophy in succession.

Drawn in a difficult group containing both 2018 runners-up Liverpool and Napoli, PSG bounced back from an opening defeat at Anfield to secure progress to the knockout stages as group winners.

English opposition awaited in the last 16 as PSG faced off against Manchester United, a routine 2-0 win in the away leg all but assuring their place in the last eight for the first time in three seasons.

No side had ever been eliminated after winning the first leg away from home by two or more goals, but PSG set more unwanted Champions League history as the Red Devils secured a 3-1 win at the Parc des Princes to progress on away goals.

Marcus Rashford’s 94th-minute penalty sealed a dramatic win for the visitors, the first time in 107 attempts that a side had overturned a 2-0 or greater home first-leg deficit.

After an underwhelming record on the Champions League stage over the past decade, PSG reached the latter stages for the first time since their takeover after progressing to a final meeting with Bayern Munich.

PSG topped a group containing Real Madrid in unbeaten fashion before overturning a first-leg deficit to overcome Borussia Dortmund in the last 16, the season then halted amid the coronavirus pandemic with the knockout stages resuming over one leg in August.

Debutants Atalanta were beaten in stunning style in the quarter-finals, as PSG scored twice in the final seconds to turn a certain defeat into victory against the Italians.

RB Leipzig were then thrashed 3-0 in the semi-finals to set up a final showdown with Bayern, though the Parisians were left frustrated as former player Kingsley Coman scored the only goal of the game in Lisbon.

PSG will hope to avenge that defeat ahead of their quarter-final second leg clash with Bayern this week, victory potentially putting Mauricio Pochettino’s side within touching distance of a maiden European crown.