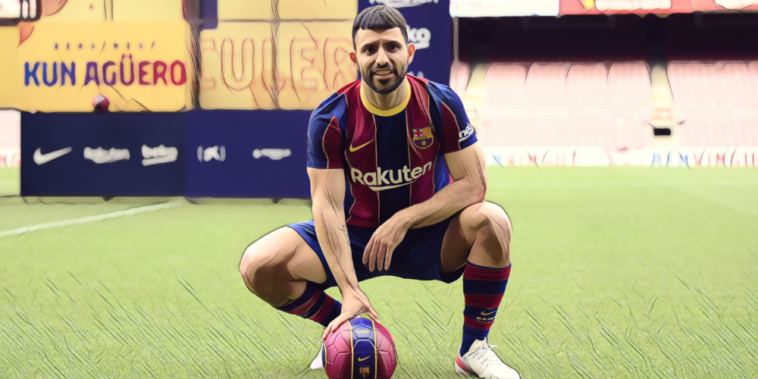 Sergio Aguero’s father has confirmed that Arsenal and Chelsea were interested in signing the forward, and has questioned Pep Guardiola’s tears upon the star’s Manchester City departure.

Aguero announced earlier this year that he would be leaving Manchester City at the end of the 2020/21 season, bringing an end to a record-breaking career at the Etihad that has delivered five Premier League titles and a record 260 goals in all competitions.

The 32-year-old leaves the division as the highest-scoring overseas player in Premier League history and has since signed for Barcelona on a free transfer, where he will unite with long-term friend and international teammate Lionel Messi.

The player’s father, Leonel Del Castillo, has now opened up on Aguero’s move to the Camp Nou, whilst revealing there were late approaches from English rivals to keep the Argentine in the Premier League.

“He is happy right now after signing for Barcelona. I see him happy,” he told Radio La Red.

“He’s been friends with Lionel Messi since they were 15 and they’ve always talked. It looks like Messi is going to stay at Barcelona so they’re going to play together.”

"He is a special person for all of us. He is so nice. He helped me a lot. We cannot replace him. We cannot." 😢

An emotional Pep Guardiola is reduced to tears when asked about Sergio Aguero, who will leave Manchester City this summer.https://t.co/COVNqfr9Dr #MCFC pic.twitter.com/PthCDZVBhI

“I don’t believe Guardiola. He never wanted him, he wants to be the protagonist of all his teams,” he said.

“He never treated him well, nor me or his brothers.

“Guardiola is a great coach but from one day to the next he changes the players, the environment changes. You never know if you are a starter or not. He said he was irreplaceable but does not have him in the squad.”

Read – Sergio Aguero: A love letter to a cold-blooded hit-man