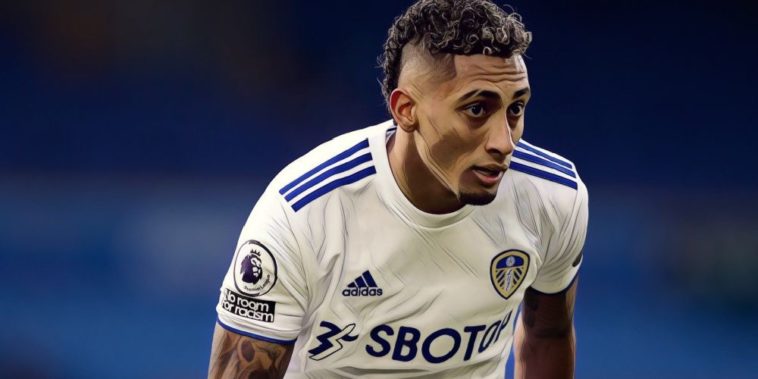 The agent of Leeds United winger Raphinha has confirmed that Liverpool have shown an interest in the player, following his strong displays for both club and country.

The 24-year-old enjoyed a fine debut campaign at Elland Road last season, netting six goals and registering nine assists in the Premier League, having joined the club from Ligue 1 side Rennes last summer for a fee of around £17m.

That impressive form helped Marcelo Bielsa’ side secure a respectable ninth-place finish in the club’s first season back in the top-flight for 16 years, while the Brazilian has already started the new campaign strongly with three league goals thus far.

He has since replicated that form at international level, having starred off the bench on debut in the comeback win over Venezuela last week – registering two assists and winning a penalty – before going on to net a brace in the recent 4-1 victory over Uruguay.

Such displays have unsurprisingly caught the attention of Europe’s top club’s, with the 24-year-old’s agent Deco – formerly of Chelsea and Barcelona – revealing that Liverpool, among others, are interested in making a move in the player, albeit while insisting that there has not been an official approach.

“Raphinha became an important player in the Premier League, the club knows he has grown and things will happen naturally,” Deco said, as per Globo Esporte.

“He is young, he has many challenges ahead, there are certainly several clubs that like him, and Liverpool do like him, there were approaches, but nothing official.

“Raphinha has a market, and Leeds have high expectations, it was never a project in a hurry.

“Leeds are aware, they’ll want to make an important sale, and Raphinha will end up growing in his career.”

Jurgen Klopp’s side are perhaps in need of greater depth in attacking areas, with heavy reliance on both Sadio Mane and Mo Salah to deliver the goods in recent years.

Manchester United were also linked in the summer prior to their £73 million signing of Jadon Sancho.