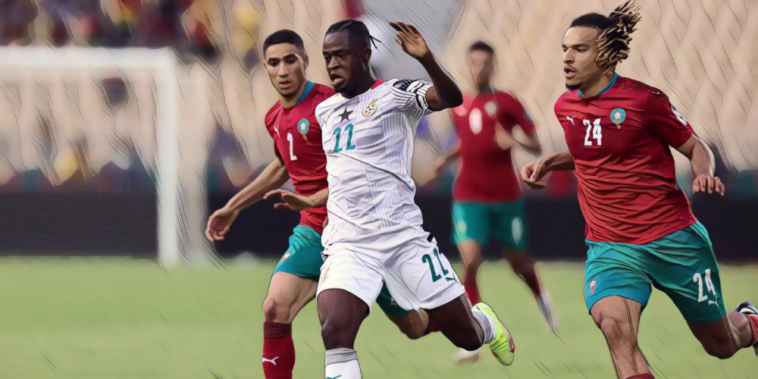 The Africa Cup of Nations is underway as the continent’s finest sides compete for the trophy, the opening fixtures having already promised a competitive tournament.

Mohamed Salah, Sadio Mane and Riyad Mahrez are amongst the leading names taking part, but the 2022 AFCON also provides a chance for lesser-heralded talents to make their mark and rise to greater prominence.

With the tournament beginning to heat up, we’ve looked at five players to keep an eye on as the competition progresses.

Here are five player to watch at the 2022 AFCON.

Karl Toko Ekambi has been carrying the weight of expectations at Lyon this season, with the versatile forward the leading scorer in a struggling side.

The Ligue 1 side have found themselves in mid-table following a disappointing start to the campaign, despite the performances of Toko Ekambi who has scored 11 goals so far this season.

All 5 of Toko Ekambi's goals in the Europa League this season 🔥@OL | #MondayMotivation | #UEL pic.twitter.com/bVoRtbNww9

The 29-year-old is the joint-leading scorer in this season’s Europa League with Lyon’s form in continental competition impressive, scoring during the club’s win at Rangers in the group stage.

The Cameroon international plays predominantly from the left and is part of the host’s side at the AFCON, with the winger set to play an influential role in the challenge of The Indomitable Lions.

His partnership with Vincent Aboubakar – who scored both goals from the penalty spot in Cameroon’s opening 2-1 win over Burkina Faso – has the potential to fire the host nation into the latter stages.

Kamaldeen Sulemana has captured the attention of leading European clubs following his exciting emergence, with Manchester United and Liverpool amongst the sides said to be keeping an eye on the teenager’s progress.

The winger starred to score 10 goals in all competitions for Nordsjælland last season, his performances persuading Rennes to splash out €20m on his services and make Sulemana the most expensive ever sale from the Danish top tier.

The Ghana international has handled the step up into Ligue 1 in impressive fashion, scoring four goals and providing two assists in just 11 league starts.

Despite starting just over half of Rennes’ fixtures this season, the direct and dangerous 19-year-old leads the division for players dribbled past (60) ahead of the likes of Kylian Mbappe (54) and Neymar (46).

Regarded as one of the brightest prospects in Manchester United’s ranks at present, the teenager has established himself at international level with Tunisia despite having made just one substitute appearance for the Red Devils.

The 18-year-old midfielder recently starred for the national side at the 2021 FA Arab Cup, where he won two man-of-the-match awards during Tunisia’s progress to the final.

Composed in possession and boasting a maturity that defies his inexperience, he has won nine caps at international level to date and could be given a prominent role in the side at the AFCON.

United spent £9m to sign Hannibal from Monaco in 2019 and the tournament could provide the club’s fans with a first sustained glimpse of his talent at senior level.

Amadou Haidara has been a regular name in the month’s transfer talk as speculation continues to surround potential interest from Manchester United in the midfielder.

The Mali international has impressed during spells at Red Bull Salzburg and RB Leipzig, following in a long lineage of star names to have been developed under the Red Bull umbrella.

Comfortable in a box-to-box role or as a midfield anchor, he will form a talented midfield axis alongside Brighton’s Yves Bissouma as Mali look to improve on a last-16 showing in 2019.

The 23-year-old is tenacious in the challenge and brings boundless running to his side’s engine room, traits that will have Red Devils’ fans keeping a close eye on his performances during the tournament.

He is rumoured to have a release clause of £33m in his contract at Leipzig.

Bamba Dieng will be a name watched closely by Premier League sides during the tournament, the forward having attracted interest from a host of sides following his breakthrough at Marseille.

The 21-year-old has scored four goals from just seven league starts in Ligue 1 this season and is understood to be on the radar of West Ham, Aston Villa, Newcastle and Crystal Palace this month.

He has featured both from the left and centrally at club level and will hope for opportunities in an exciting Senegalese strikeforce that also includes Sadio Mane, Boulaye Dia and Keita Balde.

The youngster is raw and may have to be patient for his chance at the tournament, but has shown enough this season to prove he can make an impact at this level as a talented Senegal side look to end their wait for an elusive Africa Cup of Nations success.

Read – Africa’s Allstars: Picking a best XI from the 2022 AFCON