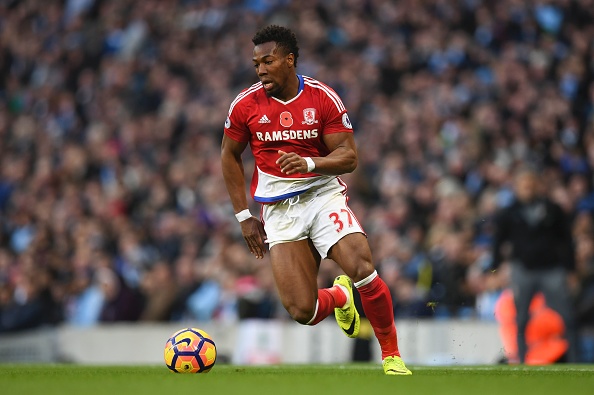 Middlesbrough FC are certainly struggling for wins in the Premier League since being promoted from the Championship last season. They’ve managed to scrape just four wins all season, the lowest in the league. But it seems no matter the result of their matches there is always one talking point. Is Adama Traore actually any good?

Traore came to England in 2015 from Barcelona signing for struggling Premier League side Aston Villa for around £7 million. However Traore struggled to get any regular first team football at Villa. Mainly due to a combination of injuries. Aston Villa were relegated at the end of the 2015/16 campaign.  Traore then opted to try to reinvigorate his career, signing for Boro in the summer of 2016 for £7 million.

Adama made his debut for Middlesbrough on 10th September 2016. He on for the final nine minutes of Boro’s 2-1 home defeat to Crystal Palace. Traore has certainly left an impression on the Premier league this season but just how much of it is positive?

Traore is by far Middlesbrough’s most attacking player and also their fastest player. Both of which Middlesbrough have certainly lacked this season. When Boro took on Chelsea earlier this season Adama completed 12 dribbles. A number more than any other player in a single Premier league game this season (stat via @premierleague).

Adama is a fast strong powerful player who in many of Middlesbrough’s games this season has been Boro’s only source of an attacking threat due to the side’s very defensive style of play. This would make him seem like a key player for the Boro in their hunt for Premier league survival this season.

Although Adama is certainly able to beat many a defender and often finds himself in a position to either cross the ball or take a shot, his end product has been somewhat questionable for much of the season.

The Spaniard has made a total of 28 appearances for the reds since joining and in this time has yet to register a goal and has only provided one assist for his teammates in the 28 games. This is a worrying statistic for Traore as one of Boro’s only three attacking options they deploy each game, zero goals in 28 games and only one registered assist is simply not good enough and may go some way to explaining why Middlesbrough are the league’s lowest goal scorers.

Additionally in all of his league appearances this season Traore has amassed a measly 17% cross accuracy. The fact this stat is so slow is definitely not good for the young winger. He must aim to improve this significantly if he wishes to be a more effective member of Boro’s squad.

For the majority of the season Karanka’s men have played with three central defensive midfielders and no attacking midfielder. Opposed to many top sides who generally opt for the two CDM’s and an attacking midfielder. This new formation coupled with Karanka’s policy of keeping men behind the ball has seriously hindered Boro’s attacking threat and often if Traore is able to break forward and get a cross in to the box, he will often be met with just one Boro player, generally lone striker Alvaro Negredo to pick out in a box filled with four or five opposition defenders. This may go some way to explaining why Adama has such low crossing accuracy.

Adama Traore has many positive attributes such as his speed, strength and ability to take players on. Although he is not helped by Middlesbrough’s style of play and lack of attacking options he does need to work on his final ball to become the top player he has the potential to be. Admittedly Traore has begun to improve in recent weeks potentially due to the guidance he has been receiving from fellow Spaniard and manager Aitor Karanka. With Karanka even stating that Traore now swaps wings each half to make sure he is on the same side as Karanka in order to receive guidance throughout the game. Seemingly this has begun to work and hopefully means Traore can continue to improve with every passing game.

Overall Traore so far this season has been in many ways a hindrance for Middlesbrough. He has failed to provide any goals for the Boro and just one assist. Arguably Middlesbrough are struggling so much because Traore has not contributed enough to the team. This may go some way to explaining why Middlesbrough are in the middle of this year’s Premier League relegation battle. Adama is also still very much learning the game and how to improve. Whilst this may be ok to have in a mid table side, when you are battling for survival like Middlesbrough are, an inexperienced forward who is lacking in goals and assists is certainly something that would hinder your chances of survival.