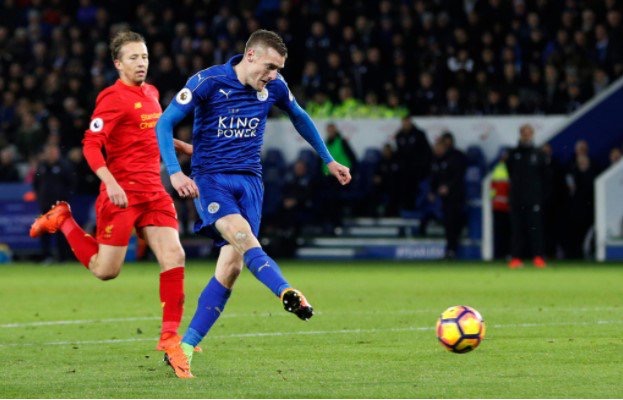 Leicester beat Liverpool 3-1 at the King Power to give the caretaker Manager Craig Shakespeare a win in his first game.

The win lifts Leicester out of the relegation zone, and Liverpool lost out on the chance to move to third.

Liverpool`s long awaited return to league action after a 16 day break was against Leicester City at the King Power Stadium.

Liverpool were looking to continue their fine display against Tottenham a fortnight ago, whereas Leicester are now in a relegation battle and dramatically sacked Manager Claudio Ranieri last Thursday.

Indeed, this sacking caused widespread condemnation of the Leicester City board in light of Ranieri`s efforts in guiding Leicester to the most unlikeliest of Premier League winners last season.

But results recently speak for themselves and the board obviously felt they needed to do something to stop the rot and avoid relegation to the Championship.

Liverpool were rocked by the late news of Jordan Henderson`s unavailability due to a foot injury meaning he was to miss this game and quite possibly the game against Arsenal at the weekend as well.

Both Lovren and Sturridge remained unavailable, which gave Lucas the nod to play and defence and Can getting a midfield role to replace Henderson. Can has had his critics recently but this could possibly be his chance to show what he can do.

Leicester on the other hand had caretaker Manager Craig Shakespeare in charge for his first game in charge, and he made only change to the team which lost to Seville in the Champions League last Wednesday with a recall for Shinji Okazaki.

Leicester started the brighter and they had a few early chances. Mignolet was called to make a fine save from a header on six minutes. It got the home crowd right behind them.

Huth sent a header over the bar in the 14th minute after out jumping the Liverpool defence but he should have done better with his header. Leicester broke free again on 19 minutes and Vardy brilliantly controlled a long ball, but his shot straight at the Liverpool keeper.

Liverpool had been quiet so far and nowhere near the performance that was expected and things got worse in the 27th minute. Vardy ran onto a superb through ball from Mark Albrighton and raced into the Liverpool box and coolly slotted his shot past Mignolet into the Liverpool net.

A rare Liverpool attack saw a Coutinho effort saved by Schmeichel, but it was Leicester who doubled their lead on 38 minutes following  a wonder strike by Danny Drinkwater. The midfielder hit a cracking shot from outside the box past Mignolet, who didn’t stand a chance of saving it.

Liverpool did have a chance to pull one back just before half time when Can forced a fine save from Schmeichel. It would have been a good time for Liverpool to score but the first half ended 2-0 to the Champions.

Klopp sent his team out early for the second half so the Liverpool fans were hoping that the Liverpool players had been given a wake up call in the half time break.

Leicester were well organised and were a completely different team from a few weeks ago.

Coutinho had an effort from outside the box saved in the 54th minute and Mane shot wide a few minutes later and the reds were starting to knock the ball around well now.

Leicester were relying on long balls for Jamie Vardy to chase which caused Liverpool`s defence problems. The England striker latched onto a great cross and got half a yard on Emre Can to guide a header past the helpless Mignolet to make it 3-0 to Leicester, but again the Liverpool keeper wasn’t at fault.

Lallana had a good effort well saved before being replaced in 65th minute following a double substitution from Klopp with both Lallana and Mane being replaced by Origi and Moreno. Mane had one of the quietest games that I can remember since joining Liverpool in the summer.

The substitutions had an immediate effect. Can held the ball up well whilst moving forward and he put the ball at Coutinho`s feet. The Brazilian’s first touch was good, and his shot fired past the Leicester keeper from the edge of the box, to give Liverpool a bit of hope.

Liverpool were having more of the ball and Coutinho in particular was playing well and creating chances. Origi had an effort well saved, as did Coutinho himself, but they couldn’t get that all important second goal to set up a frantic finale.

Liverpool`s mid season break didn’t have the desired effect. Rather than it being an advantage with having a rest has proved to be quite the opposite where they perhaps needed another game to continue the momentum against Tottenham after seemingly getting back on track. Liverpool face Arsenal at Anfield on Saturday, and need to put this game well behind them.

Leicester on the other hand will be relishing their next game at home to Hull City at the weekend as another win would help them in their fight to stave off relegation. This was a completely different Leicester side to that we have seen of late, and maybe the change of Manager has been a master stroke. Although I can`t help thinking these players let Claudio Ranieri down in recent months.