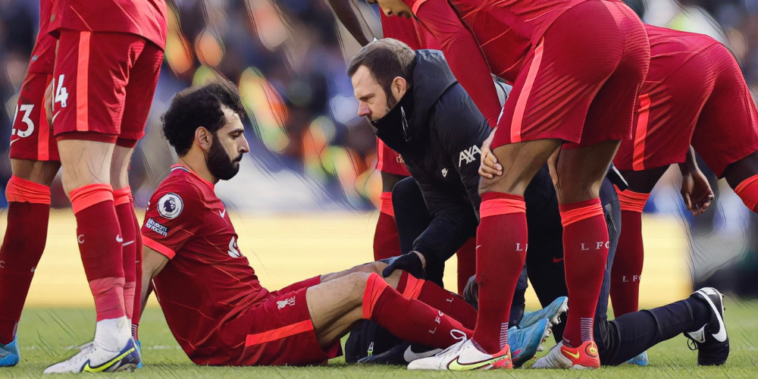 Jurgen Klopp has described Mohamed Salah as a ‘tough cookie’ and has provided a positive update on the forward’s fitness ahead of Liverpool’s trip to Arsenal.

Salah was substituted with a foot issue during the Reds 2-0 win at Brighton on Saturday lunchtime, with the Egyptian a fitness doubt heading into Liverpool’s clash with Arsenal at the Emirates tomorrow evening.

Liverpool can move within one point of leaders Manchester City with a win in North London, as the club look to extend their winning run to nine Premier League fixtures.

Klopp has provided a positive update on Salah’s situation ahead of the game with the Gunners, revealing that the 29-year-old has been declared fit to return to training.

“Mo is a tough cookie,” said Klopp at his pre-match press conference. “We were quite happy and lucky.

“It’s swollen, painful, but today less so. I got a message before the press conference that he’s ready to train. We’ll see how that looks.”

Klopp was again asked about Salah’s contract situation, after the player’s agent, Ramy Abbas Issa, tweeted a string of laughing emojis after Klopp’s recent comments that Liverpool ‘cannot do much more’ to persuade the star to sign a new deal.

Salah’s current contract expires in 2023 and the Premier League’s leading scorer is understood to be seeking a new deal that moves him in line with the division’s highest earners.

“I’m not on Twitter, so that’s another good reason for that,” Klopp said.

“You got me in the trap and I created headlines. It’s all fine.

“I don’t know about any kind of reaction but I am not concerned. It is how it should be. The decisive parties are in contact.”