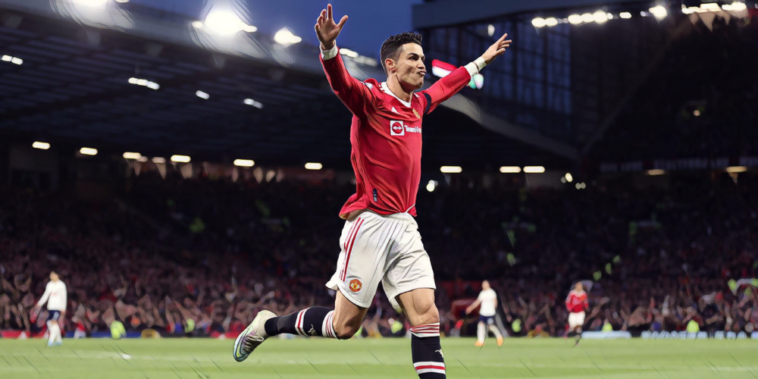 The latest Premier League action proved full of incident and once again we’ve delved through the weekend’s football to compile our divisional Team of the Week.

Manchester United’s marquee man came to the fore as the Red Devils won a thriller with Tottenham at Old Trafford, though its Arsenal who remain in pole position for the top four after a fifth consecutive league win.

Down at the bottom, Leeds left it late to secure a potentially crucial win over Norwich, whilst there were vital victories for both Brentford and Watford in their battles to remain in the Premier League this season.

West Ham kept alive their push for Champions League qualification with a win over in-form Aston Villa, weathering some early pressure from the visitors to secure a 2-1 win at the London Stadium.

Lukasz Fabianski made two vital interceptions with the game goalless for the Hammers, first saving Philippe Coutinho’s close-range effort before getting down well to turn Danny Ings’ shot onto the post.

The Pole’s performance provided the platform for the Hammers to earn all three points, as goals from Andriy Yarmolenko and Pablo Fornals kept West Ham within reach of the top four.

Arsenal have now won nine of their past 11 league fixtures to climb into the top four and the Gunners’ winning run continued with a 2-0 win over Leicester at the Emirates.

Ben White was a stand-out performer for the North London side, ending the game with a 90% pass accuracy, two tackles, three clearances and three interceptions.

White made a brilliant last-ditch intervention to deny James Maddison inside the penalty area and has grown in importance as part of Arsenal’s home-grown core. Left out of the England squad in November, he deserves to be included when Gareth Southgate names his Three Lions’ squad for the upcoming international break this week.

Joel Matip continued his excellent form with another impressive performance in Liverpool’s 2-0 win at Brighton, with the centre-back providing the assist for Luis Diaz’s opener with a fine pass in behind.

An 𝙞𝙣𝙘𝙧𝙚𝙙𝙞𝙗𝙡𝙚 Joel Matip assist for a brave header from @LuisFDiaz19 to set us on our way to victory in #BHALIV 👏 pic.twitter.com/kKRPUga3jP

Matip also led the game for aerial duels won (4) and made more clearances than any other Liverpool player (5), the Premier League’s Player of the Month for February extending his recent run to two assists, a goal and four clean sheets across his last five Premier League matches.

Often an unsung component of Jurgen Klopp’s side, the Cameroonian is enjoying a deserved moment in the spotlight in recent weeks.

Antonio Rudiger’s future is increasingly uncertain following the sanctions imposed on Chelsea last week, the defender out of contract at the end of the season and unable to negotiate new terms at present.

Rudiger ignored the outside noise to produce a commanding performance in Chelsea’s 1-0 win over Newcastle, leading the backline with his usual manner of aggressive front-footed defending.

The Germany international has become a huge fans’ favourite with his determination resonating with the crowd at Stamford Bridge, his committed approach and powerful surges forward having become a trademark of Thomas Tuchel’s side.

Thomas Partey delivered a brutal assessment of his own form last December, admitting he had been disappointed with his own adaptation to the Premier League.

The Ghana international has since enjoyed a remarkable turnaround to become a central figure in Arsenal’s improving side with the midfielder having been among the Premier League’s best in 2022.

Partey was outstanding in the Gunners 2-0 win over Leicester, winning 100% of his duels, making six ball recoveries and a game-leading four tackles. The 28-year-old combined strong defensive work with an effortless ability to beat the press and a fine performance was capped with the game’s opening goal as he rose to meet Gabriel Martinelli’s corner.

It’s taken some time, but we’re finally seeing the talent of Thomas in an Arsenal shirt.

Ruben Neves appears to be on an upward curve of improvement with Wolves midfielder following a brilliant performance against Watford in midweek with another superb showing at Everton.

Neves was a controlling figure in the centre of the pitch as Wolves secured a 1-0 win, with the Portugal international providing the assist for Conor Coady’s goal with a wonderful cross from the right.

The 25-year-old was on another level to an Everton midfield that failed to get to grips with the game, winning six ground duels, making three successful dribbles and completing 90% of his passes at Goodison Park.

It would be a surprise if there is not interest in the influential Neves from sides further up the division this summer.

Getting better and better with each performance, Martin Odegaard has become the centre-piece of Mikel Arteta’s improving team.

The Norway international was outstanding in Arsenal’s 2-0 win over Leicester, mixing industry with invention as he pulled the strings in an advanced midfield role.

Odegaard provided game-leading numbers for chances created (6) and passes in the final third (27), whilst he covered more ground than any other player at the Emirates (11.4km).

Odegaard’s subtle touches and movement made him difficult to pick up for the Leicester midfield and backline and the promise of more to come from the increasingly influential 23-year-old is reason for excitement at Arsenal.

Cucho Hernandez’s double has given Watford hope of an escape from the bottom three, with the Hornets moving level on points with 17th-placed Everton in the Premier League this weekend.

Hernandez scored both goals as Roy Hodgson’s side won 2-1 at Southampton, first reacting to some woeful defending from the Saints to round Fraser Forster and fire home from an acute angle.

Cucho Hernandez is the third Watford player to score 2+ goals in a Premier League game this season:

All three games were away from home. pic.twitter.com/VMiEtIZ7mL

The winter window arrival continued his instant impact at Liverpool with another impressive performance, the Colombian again full of running and tricks during the 2-0 win at Brighton.

Diaz opened the scoring with a brave header that saw him clattered in the process, but dusted himself down to come out on top during his duel with the lively Tariq Lamptey.

The 25-year-old was not intended to be a transfer target until the summer, though Liverpool’s fast-tracking of a deal for Diaz could prove pivotal in their push for the big trophies this season.

His arrival has added quality and unpredictability to Jurgen Klopp’s attacking options, moving Sadio Mane into a central role and providing the depth needed to challenge on multiple fronts.

Ivan Toney’s goals propelled Brentford into the Premier League last season and the forward’s contribution could just have preserved the Bees’ top-flight status.

Toney followed last weekend’s hat-trick against Norwich with both goals as Brentford won another relegation six-pointer with Burnley, a 2-0 result which moves Thomas Frank’s side eight points clear of the bottom three.

The 25-year-old’s physicality proved a problem for Nathan Collins and James Tarkowski and his brace – a header from Christian Eriksen’s wonderful cross and a trademark penalty of ice-cold composure – took Toney’s haul to 11 league goals for the campaign. Just four Premier League players have scored more this season.

Cristiano Ronaldo has had no shortage of critics this season, but when it mattered most he delivered to keep alive Manchester United’s hopes of Champions League football.

Neither side could afford to lose as the Red Devils took on Tottenham at Old Trafford and it was Ronaldo who took centre stage to score a vintage hat-trick in a 3-2 win for the home side.

His first was a special effort as he lashed home from distance, before bursting forward to turn home Jadon Sancho’s centre for a second. His hat-trick was perhaps the best of the lot, rising to meet Alex Telles’ delivery in textbook fashion and seal all three points in dramatic fashion.

There are times this season when Ronaldo’s presence has appeared to increase the discord in the Manchester United side, but the 37-year-old remains an elite match-winner when service is provided.

It’s now 18 goals for the season in all competitions, goals which were largely responsible for the Red Devils progress from the Champions League’s group stage and include six winners in the Premier League.

Read – Why are magnificent and complex Manchester City dumbed down and dismissed?