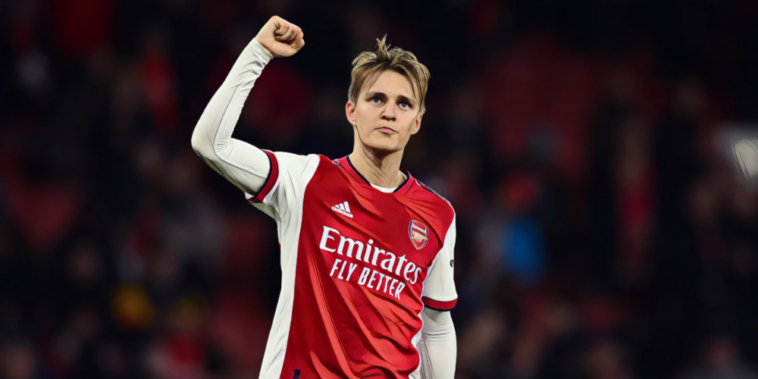 Cristiano Ronaldo stole the show as Manchester United beat Tottenham 3-2 in an Old Trafford thriller, whilst there were wins for West Ham, Wolves and Arsenal as each maintained their pushes for European football.

Elsewhere Leeds are up and running under Jesse Marsch after a last-gasp win at Elland Road, whilst Watford reignited their survival hopes after winning at Southampton.

Here are our heroes and villains from the Premier League’s weekend fixtures.

Does Cristiano Ronaldo create or cover up problems at Manchester United?

It is an argument that has raged all season, though this weekend’s performance certainly provided a strong argument for the latter with the Portugal international producing his best display since returning to Old Trafford last summer.

Ronaldo hit a hat-trick as Manchester United beat Tottenham 3-2 in a must-win clash, the brilliance of the 37-year-old’s finishing securing all three points in the race for a top-four finish.

Ronaldo was at his vintage best to score three goals of differing delight, first rifling home a blockbuster effort from distance as Eric Dier foolishly allowed him space and time to shoot.

The forward then tapped home from Jadon Sancho’s centre to score a second, before rising to meet Alex Telles cross and head home a dramatic winner.

Ronaldo’s treble was the 49th of his club career and took the forward to 12 goals in the Premier League this season – only Mohamed Salah has now netted more. It also leaves his total for club and country at 807 goals, a record in the sport’s history.

Ronaldo might be coming towards the end, but there’s still big moments and big performances in one of the all-time greats.

Everton are in the Premier League’s version of quicksand and struggling to escape, the weekend loss to Wolves leaving the Toffees outside the relegation places on goal difference.

It’s difficult to pick out one villain from a side packed full of under-performers, though Jonjoe Kenny received two bookings inside four second-half minutes as the club’s afternoon went from bad to worse.

0.45 – Over their last 20 @premierleague games, Everton have averaged just 0.45 points-per-game, losing 15 of those matches (W2 D3); since the start of October, this is the lowest ratio of any side in the division. Stuck. pic.twitter.com/qstC6TWMSv

Frank Lampard has inherited a mess on Merseyside, but he has struggled to lead a turnaround and it’s now five defeats in six league fixtures since he replaced Rafael Benitez, a lack of consistency in his tactics having contributed to the club’s continued poor performances.

Everton have never had less points at this stage of a season and the Toffees’ incredible financial mismanagement during Farhad Moshiri’s ownership could soon lead to an embarrassing relegation.

Joe Gelhardt’s stoppage-time winner against Norwich took the headlines as Leeds secured a first win under Jesse Marsch, but it was the performance of Raphinha that stood out during the 2-1 success at Elland Road.

The Brazilian was back to his brilliant best as Leeds dominated proceedings against the Canaries, causing the visitors countless problems and twice hit the woodwork before assisting Gelhardt’s late winner.

🤩 "Gelhardt is the hero!" pic.twitter.com/wh1RT4tjuu

The 25-year-old’s performances had dipped after being linked with an exit in January, but he will be crucial to Leeds’ hopes of escaping the dogfight at the bottom of the Premier League.

At his best Raphinha is a footballer capable of creating magic and he proved a class apart against the Canaries, contributing a game-leading four key passes and creating two big chances.

That Robert Sanchez was not penalised for his high challenge on Luis Diaz perhaps says more about the standard of Premier League officiating than the goalkeeper himself, but there’s little doubt the Spaniard’s reckless collision with the Liverpool winger deserves his inclusion in our Villains of the week.

Sanchez collided with the Colombian in crude fashion, placing a knee into the chest of Diaz in an incident which VAR deemed was not worthy of further punishment.

"If you ever want to see serious foul play, that's it."

"He could have been seriously, seriously injured there."

"It's WWE that."@rioferdy5, @petercrouch and Steve McManaman are left baffled Robert Sánchez is still on the pitch after his collision with Luis Díaz 😳 pic.twitter.com/UZZhP6Q1by

Had Diaz – who scored after reaching the ball first – not found the net, it is almost certain that Sanchez would have been on the receiving end of a red card and it was fortunate his recklessness did not lead to more serious injury for the flattened forward.

Ivan Toney has found his feet in the Premier League and the forward continued his impressive run of form with a double in Brentford’s 2-0 win over Burnley.

Toney has now scored seven goals in his past five Premier League appearances for the Bees, coming to the fore at a crucial time in the club’s season.

He followed his hat-trick against Norwich with a match-winning brace to beat Burnley, securing back-to-back wins which have moved Brentford – without a win in their previous eight – away from the relegation places.

The 25-year-old has scored 11 goals in the Premier League this season, a figure that moves him level with Harry Kane and one only four players can better across the division.

Far from the standard Southampton have come to expect from the centre-back this season, Salisu produced an error-prone performance as the Saints’ losing run extended to three games.

Salisu was arguably at fault for Chris Wood’s goal in the defeat to Newcastle in midweek and followed that with a huge gift for struggling Watford this weekend, his undersold back pass capitalised on by Cucho Hernandez to open the scoring.

Having made notable strides this season the 22-year-old will want to forget this performance.

Martin Odegaard appears to be getting better and better as the creative conductor of the Arsenal side, with the Norway international again outstanding as the Gunners beat Leicester at the Emirates.

No player on the pitch created more than Odegaard’s six chances, whilst his five chances created in the first half were the most recorded in the first half of a Premier League fixture by an Arsenal player since Mesut Ozil managed six against Everton in 2017.

Martin Ødegaard created five chances in the first half vs. Leicester, the joint most he has made in a Premier League game for Arsenal.

Mikel Arteta was delighted with the 23-year-old’s performance and believes Odegaard is a footballer who brings the best from those around him.

“He was terrific again today, in every aspect of the game; what he had to do in defending, when we were high and deep; in build-up phases; in the final third, the way he understood and managed the game when he was needed,” Arteta said following the win over the Foxes.

“He’s come a long way since his arrival, he is showing great maturity and responsibility on the pitch and he makes the other players better, I think.”

Odegaard enjoyed a solid if unspectacular loan spell last season before arriving on a permanent deal from Real Madrid, the £30m fee fast proving a more than shrewd signing.

Just as Burnley appeared to have turned a corner, a run of three straight defeats has left Sean Dyche’s side facing a huge task to escape the Premier League’s relegation places.

Goals have been a major problem for the Clarets and this weekend’s 2-0 defeat at Brentford saw the club muster just one shot on target, their lack of creativity and goal threat a major reason for their slide towards relegation.

Wout Weghorst was brought in with a fine reputation in January, with only Robert Lewandowski having scored more goals than the towering Dutchman across the last three Bundesliga seasons.

However, the 29-year-old has cut a frustrated figure since a bright start to his Premier League career and now has just one goal from eight league games.

The service has not been up to standard, with wingers Dwight McNeil and Johann Berg Gudmundsson having mustered no goals and two assists between them in a combined 39 Premier League starts.

That centre-back Ben Mee is the club’s second-leading scorer on three goals tells a story and its one which looks set to end in the Championship barring an upturn in performances.