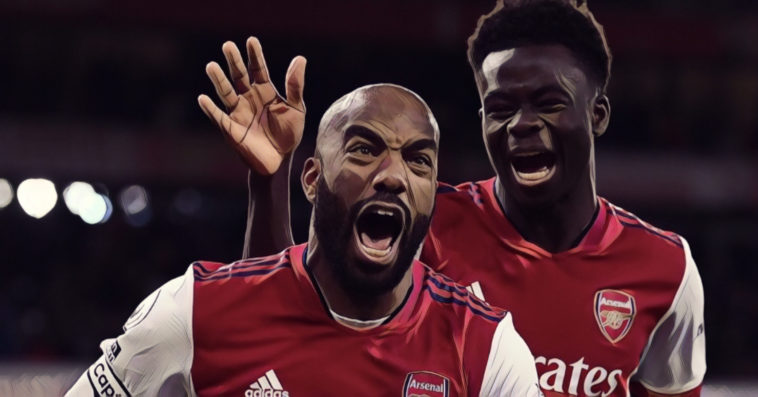 Arsenal gave their hopes of finishing in the top four a massive boost by securing a last gasp 2-1 win over fellow European hopefuls Wolves at the Emirates.

Bruno Lage’s Wolves side started confidently and they would have a Roman Saiss goal ruled out for offside inside the opening couple of minutes.

Then, after 10 minutes, Wolves would take the lead, and from an Arsenal perspective it was a goal that could have been easily avoided. The Gunners centre-back Gabriel – who scored the only goal when these sides met a couple of weeks ago – played a blind back pass towards Aaron Ramsdale, but Hwang Hee-Chan was lurking and the South Korean got there in front of the ‘keeper before finishing smartly from a tight angle.

Just moments later Raul Jimenez would miss a glorious chance to double the visitors lead, the Mexican striker dragging his shot wide after being slipped through by the lively Daniel Podence.

Arsenal woke up somewhat after that and both Alexandre Lacazette and Martin Odegaard both found space in the box, but on each occasion the forwards were crowded out by a well-drilled Wolves defence.

Just a minute after the break Hwang would almost bag his second, although Ramsdale did well to narrow the angle and force the Wolves mans effort around the post.

The Emirates crowd would eventually get the goal they had been craving 10 minutes before time to set up an exciting finish. Arsenal attacker Eddie Nketiah cutting it back to fellow substitute Nicholas Pepe and the Ivory Coast international turned well and fired past Jose Sa.

Within minutes, both Pedro Neto and Odegaard went within a whisker of scoring a winner for their sides, as the game became stretched.

Then in the sixth minute of added time Arsenal would get a crucial winner and break Wolves hearts. Lacazette found himself free in the area before he hit a scuffed shot that looked to be heading wide, however in his desperation to stop the effort, Jose Sa inadvertently palmed the ball into his own goal.

The win sees Arsenal move within a point of fourth placed Man United with two games in hand, and speaking afterward Mikel Arteta was delighted to secure such an important victory.

“When you win the match after going 1-0 down and you know what it means against Wolves it is really difficult but we did it. A really important win for this,” Arteta told Amazon Prime.

“We don’t know today how important this will be but we know the importance of winning our matches and certainly at home we know we have to be extremely good. At the end of May we want to be fighting for those places.”

The Spanish coach admitted that winning games in the fashion his side did tonight will only help to instill belief in his young squad.

“Probably the way we won it because it created a belief and togetherness and an atmosphere and cohesion with our fans as well and that is extremely necessary. This teams needs belief, we are really young squad.

“After three defeats in the first three games we had to avoid relegation. That was the first thing we had to do. Then we took it game by game and don’t lose sight of the objective with the team. You just have to be consistent with your vision and the way you prepare and believe the result will come.”