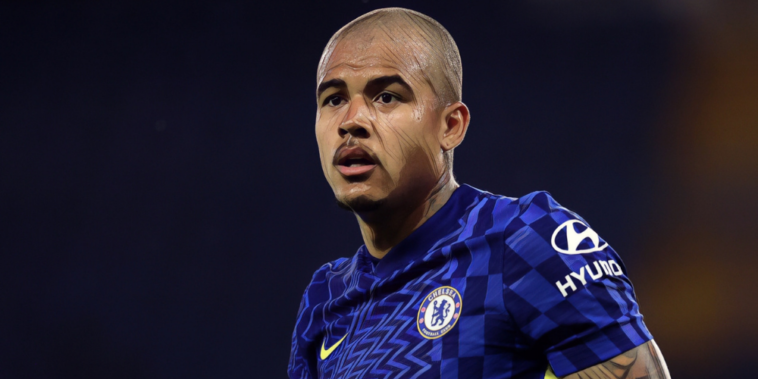 Thomas Tuchel says Kenedy could be the ‘perfect’ solution to Chelsea’s wing-back issues and says the Brazilian has a ‘clean slate’ at the club after being recalled from a loan spell at Flamengo.

Kenedy has returned to Chelsea after being recalled from his loan spell in Brazil, as the west Londoners seek additional depth in the absence of the injured Ben Chilwell.

The 25-year-old has not featured for the Blues since the 2017/18 campaign, having spent the past three seasons on various loans including spells at Watford and Newcastle.

Speaking ahead of Chelsea’s FA Cup fourth round clash with Plymouth Argyle this weekend, Tuchel has discussed the club’s decision and says Kenedy will be given a fresh chance to impress at Stamford Bridge.

“It’s a clean slate and I think he knows it,” Tuchel said at his pre-match press conference.

“I followed Kenedy for many years and he was very impressive in the beginning. He lost track a little bit and maybe couldn’t fulfil the demands from the outside I had. But this is life. He gets a second or third chance to be here and it’s not about what happened.

“He was good in pre-season, decided he wanted to go back to Brazil, but having Kenny and Emerson on loan, Kenny was possible and now he is here.

“He is a very nice guy, very talented, and let’s see where he is. It’s a huge opportunity and I am very happy to give it to him and help him make the best of it.”

Kenedy has featured in various positions down the left and Tuchel believes the returning loanee can provide an option for Chelsea at left wing-back in Chilwell’s continued absence.

“If we play with a wing-back, it’s a perfect role for him given his profile as a player. He has a strong left foot, strong in possession, can shoot and cross very precisely. That’s more or less it.”

Tuchel also provided an update on the fitness of Reece James and confirmed the right-back is not ready to return, having sustained a hamstring injury against Brighton in December.

The England international has not returned to first-team training and will miss Chelsea’s involvement in the Club World Cup, with the European Champions travelling to the UAE for the inter-continental competition next week,

“He is not in team training yet, so maybe that answers the question,” he said. “After a couple of weeks, he will need some time in team training to get the confidence back. He does not travel with us to the Club World Cup.”

Tuchel insisted that Chelsea will take a patient approach to James’ return, admitting the defender’s issue is a ‘big injury’ that will take time to recover from.

“For Reece, I am too long a coach to not get overexcited by pure dates that are maybe out there. I know you can have setbacks and can take long sometimes,” he said.

“We are patient and we want to have him on the pitch tomorrow, of course, but it’s not happening at the moment and we have to stay patient. He works hard and is in best hands.”