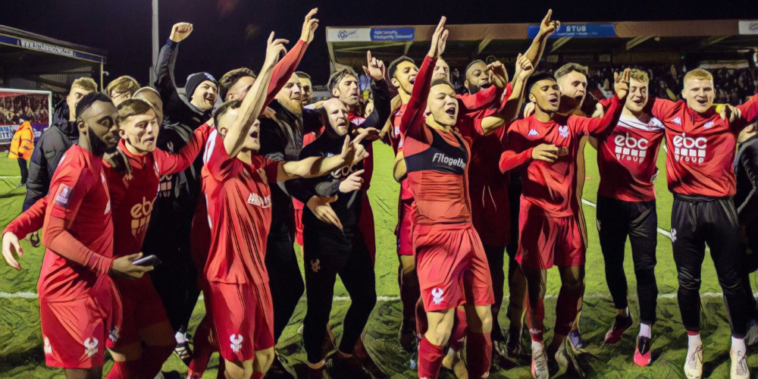 The FA Cup returns this weekend as we prepare for the fourth round fixtures, the draw having produced some fascinating ties between sides from differing levels of England’s football pyramid.

There will be David and Goliath clashes as the remaining non-league teams take on opponents further up the divisions, whilst there are some of all-Premier League match-ups as several sides view the FA Cup as a genuine chance of silverware.

Much like using mobile payments for online gambling the FA Cup always provides plenty of excitement, so with that in mind we’ve decided to look at five of the most exciting fourth-round ties.

Kidderminster Harriers are the lowest-ranked side remaining in the FA Cup this season, the sixth-tier side having been rewarded with a clash against Premier League opposition in West Ham.

Televised on Saturday lunchtime, it is a game that has all the makings of a classic upset as Russ Penn’s side welcome the Hammers to their 6,444-capacity Aggborough Stadium.

Kidderminster upset the odds to beat Championship side Reading in the third round, but a clash with David Moyes’ Champions League-chasing side will represent a significant step up in class.

Take it away, Gaffer…❤ pic.twitter.com/hIh6CAamoY

Moyes has traditionally taken the cup competitions seriously and is likely to field a relatively strong side despite West Ham’s failure to add much-needed recruits in January, as a comparatively thin squad look to compete on multiple fronts.

The FA Cup represents a realistic chance of silverware for West Ham, who have not won a major trophy since last lifting this competition in 1980. It’s up to Kidderminster – pushing for promotion in the National League North – to act as a potential banana skin

Frank Lampard makes his managerial debut at Everton this weekend, as the Toffees take on Brentford in an all-Premier League affair at Goodison Park.

It’s been a difficult season for Everton who saw the gamble on Rafael Benitez spectacularly fail, sitting just four points above the Premier League’s relegation places at present.

This weekend’s clash with the Bees represents something of a free hit for Lampard, who will get a first glimpse of his new squad before the pressure of securing Premier League survival begins.

Everton bolstered their options on deadline day with the late captures of Donny van de Beek and Dele Alli, though both are cup-tied for this weekend’s clash.

It will be fascinating to see how Lampard lines up against the Bees, however, perhaps giving an indication over how he will include two talented midfielders who arrive on Merseyside with a point to prove.

Van de Beek made just four league starts in 18 months at Manchester United and has signed on loan as he looks to revive his career, whilst the decline of Alli has been well-documented with a move to Everton representing a fresh start.

Alli was viewed as a Lampard reincarnate following his exciting emergence at Tottenham, with his ability to ghost forward and score goals from midfield seeing him win back-to-back PFA Young Player of the Year awards.

Brentford have also been boosted with the arrival of Christian Eriksen and – whilst the clash will likely come too soon – the return of the Denmark international was the feel-good story from the Premier League’s deadline day activity.

Nottingham Forest meet Leicester in an East Midlands clash at the City Ground, the Championship side looking to follow their upset of Arsenal with the scalp of the holders this weekend.

Leicester have failed to build on the success of last season’s FA Cup triumph and fifth-place finish, with a wealth of injury issues contributing to their mid-table standing in the Premier League.

Who remembers this trip to the City Ground? 🙋‍♀️🙋‍

Tell us your memories of our late win! 👇‍ pic.twitter.com/xPb7PiQA0W

Forest – eighth in the second tier and pushing for the play-offs – will be confident of beating another Premier League side, with Leicester’s vulnerability defensively a weakness that Steve Cooper’s side will hope to exploit.

Forest retained the services of Brennan Johnson and Djed Spence in January despite top-flight interest and a busy transfer window included the arrival of Jonathan Panzo, a defender Cooper knows well from his time managing England’s successful youth sides.

The game will be the first meeting between the teams since the 2013/14 Championship season in which Leicester were promoted, whilst the Foxes have lost just one of their last eight meetings with Forest in all competitions (D5 L2).

However, Forest possess an impressive record when meeting the FA Cup holders, having progressed from five of their seven ties with the previous season’s winners.

Manchester City have reached at least the semi-finals in each of the past three seasons and will be looking for success in the competition once again, as Pep Guardiola’s side prepare to welcome Fulham to the Etihad this weekend.

The two teams met in the third round last season with City running out convincing 4-1 winners, but the Premier League side will face a different Fulham outfit this time around.

Marco Silva’s side will head north with little fear following an outstanding campaign in the Championship so far, sitting five points clear in the second tier with a game in hand on nearest challengers Blackburn.

🏴󠁧󠁢󠁥󠁮󠁧󠁿 Top rated players in the Championship this season:

🤔 I wonder what the pattern is @FulhamFC… pic.twitter.com/LuJvKauPQY

Fulham have been free-scoring in their search for an instant return to the Premier League and have netted a staggering 74 league goals already this season, with Aleksandr Mitrovic and Harry Wilson having starred.

City’s quality should be enough to progress to the next round, but Fulham’s goal threat and fearless approach could lead to an entertaining cup contest at the Etihad.

Boreham Wood are into the FA Cup’s fourth round for the first time in their history, with Luke Garrard’s team one of just two non-league teams – alongside Kidderminster – to have reached this stage.

The fifth-tier side are fifth in the National League at present and amid a congested race to secure promotion to the Football League, sitting just two points behind league leaders Stockport County with two games in hand.

Boreham Wood are yet to concede a single goal in the FA Cup this season and beat AFC Wimbledon 2-0 last time out, eliminating the League One side after an impressive performance at Meadow Park.

If you have any behind the scenes clips, reactions to goals or you singing 🎶teenage dirtbag🎶 tag us in them!#WeAreTheWood pic.twitter.com/9qb4dd5N1n

The minnows will face a huge challenge to reach round five, however, travelling to face Championship promotion hopefuls Bournemouth on Sunday.

Scott Parker’s side enjoyed a productive finish to the transfer window with five deadline day arrivals as the Cherries boost their push for a Premier League return. Their business included the eye-catching arrivals of Nat Phillips (Liverpool) and Todd Cantwell (Norwich) on loan, in addition to the arrival of Wales international Kieffer Moore.

Read – Eight of the most intriguing January deals across Europe