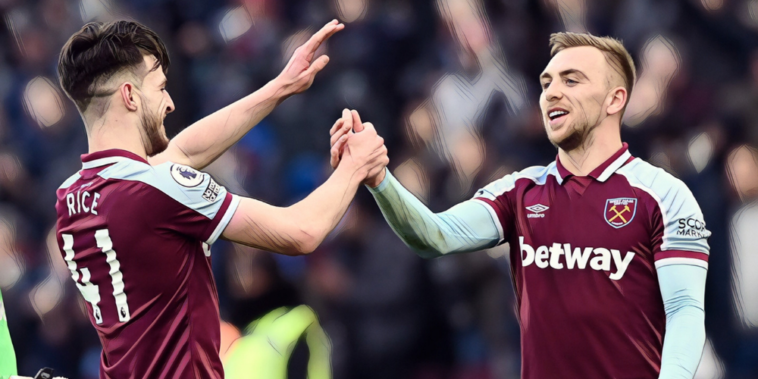 Leicester and West Ham shared the spoils in the Premier League at the weekend, a clash between two teams with grand ambitions of upsetting England’s established order.

Last season both teams finished inside the division’s top six, securing European football in the process and increasing optimism that it is possible to break through at the Premier League’s summit.

The reference to the Premier League’s leading sides – Chelsea, Arsenal, Liverpool, Tottenham and the two Manchester clubs – as the ‘top six’ is a collective term that often ruffles feathers amongst the fanbases of rest of the division.

Whilst that group of clubs may not always finish in the ‘top six’ positions – though it has happened three times in the past five campaigns – each are regarded as superior to the rest of the Premier League in terms of stature, fanbase, prestige and, most crucially, resources.

Leicester’s freakish title win in 2015/16 aside, no team outside that six clubs has finished in the Premier League’s top four in more than a decade. Everton were the last in 2004/05, a time that pre-dates Manchester City’s emergence as England’s dominant force.

To upset the expected order, teams must find the perfect cocktail of leadership, recruitment and timing.

Leicester and West Ham have made a good fist of their challenge in recent seasons, with the Foxes in particular having come agonisingly close.

Brendan Rodgers’ side, somewhat incredibly, spent 567 days in the Premier League’s top four throughout the 2019/20 and 2020/21 seasons, though late-season slumps and final day defeats saw the Foxes miss out on Champions League qualification on each occasion.

Winning the FA Cup for the first time in the club’s history last season was significant consolation, but their struggles to replicate last season’s performances this time around has raised the question as to whether Leicester have now missed the boat.

Rodgers’ recruitment in the summer looked positive. Patson Daka arrived from Red Bull Salzburg to provide genuine competition for Jamie Vardy, having been tracked extensively by clubs with richer resources than Leicester.

Leicester’s season has failed to build on recent successes, however, the Foxes languishing in the bottom half and their hopes of European football – certainly a top-four finish – are all but over.

🗣 "You will always be under pressure if you're not getting results."

Had Rodgers side gotten over the line in the past two seasons, who knows where Leicester could be right now, or which names could have been attracted to the King Power in search of Champions League football?

Sure, the clubs with long storied histories will always prove persuasive, but the prospect of moving to the Midlands with a place in Europe’s elite secured would have proven tempting for transfer targets.

Have Leicester missed their genuine chance to make the top six and top seven? Injuries have decimated Rodgers’ squad this season, but the Foxes have lacked the consistency of previous campaigns.

West Ham now find themselves in a similar situation. A surprise top-six finish last term has swelled optimism around the London Stadium, and the Hammers are again competing at the top end despite juggling European commitments.

David Moyes has done a remarkable job in guiding the club towards the top four at present, but will the Hammer’s failure to add to their options in January be their undoing?

Michail Antonio remains the only recognised centre-forward at the club, whilst the Jamaica international has previous with hamstring injuries and just two goals in his past 16 league appearances.

Darwen Nunez, the leading scorer in Portugal’s Primeira Liga this season, was linked with a move from Benfica, but the window slammed shut without reinforcements.

Similarly there are issues at centre-back, with Angelo Ogbonna’s absence voiding the side of experience and leadership. Issa Diop has struggled this season, with Moyes’ decision to start Kurt Zouma in recent fixtures both controversial and an indictment of the club’s desperation to break the top four.

West Ham may never get a better chance at Champions League football and their owners – and fans – will hope it is not one wasted by a reluctance to back the man in charge at a time of need.

Manchester United are struggling, Tottenham are in transition and Arsenal’s squad is both inexperienced and short of strength in depth. Can West Ham take their chance?

Next season will be more challenging. Manchester City, Liverpool and Chelsea boast three of the best squads in European football. Manchester United – whoever the new manager is – will invest. Arsenal are improving. Tottenham have one of the best coaches in the game in Antonio Conte.

Further north, Newcastle – should the Magpies avoid relegation – are set for a revolution amid their billionaire backing. Steven Gerrard has already shown his lure at Aston Villa. Everton and Leicester will both want to bounce back from testing seasons.

Bigger clubs will circle for the Hammers’ top talent should their challenge fall short, not least Declan Rice who has made no secret of his ambition to compete for trophies and on Europe’s biggest stage.

Jarrod Bowen, too, will attract interest with the winger having pushed himself into England contention with a fine individual season that has seen only Mohamed Salah provide more goal involvements in the Premier League.

The race for Champions League football is one that could go down to the wire, with just seven points separating Manchester United in fourth and Tottenham down in eighth. The Hammers are fifth, but each of the chasing pack have games in hand, even if the contenders continue to stumble behind.

It will be tight and testing for the east Londoners, who will hope their reluctance to pull the trigger on January deals does not come back to bite.

Missing out on the top four this campaign could just see the Premier League’s glass ceiling reinforced once again ahead of next season.