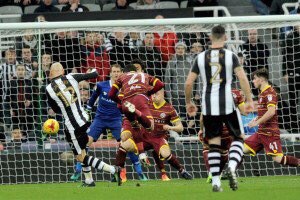 Although they took the lead twice, an own goal in the last few moments of the game prevented Rafa Benitez’ Newcastle from overtaking Brighton in the Championship title race.

The Magpies needed to prove that signings were not required dusing the January transfer window. A lack of activity caused anger among supporters who did not see one new face arrive at St James’ Park in the month.

Once again Benitez rested the majority of his first team members in the FA Cup against Oxford United. Unlike the Birmingham City cup clash, this decision did not pay off for the Spaniard as he witnessed Newcastle lose 3-0 to the third tier opposition. Nine changes were made to the team that played against Oxford; Isaac Hayden and Ayoze Perez were the individuals to retain their places in the first eleven.

Ian Holloway made three changes to his team which lost 2-1 to Burton Albion on Saturday, bringing in Conor Washington, Ryan Manning and former Newcastle player James Perch, a player stated that he never desired to leave Tyneside in the first place. Kazenga Lua Lua also returned to his old club making the bench.

The game could not have started better for Newcastle. Within sixty seconds of the kick off, Jonjo Shelvey took the ball into his reach on the edge of the box, and on the half volley smashed it passed goalkeeper Alex Smithies. The atmosphere was electric and there quickly came another opportunity for the hosts. Ayoze Perez knocked the ball down into Yoan Gouffran who lashed the ball on target; but he could only see his shot caught by the goalkeeper.

Minutes later, Massimo Luongo picked the ball up on the edge of the area and aimed for a curled shot into the far corner, however he could only watch the ball pass the by-line for a goal kick.

On the ten minute mark, Daryl Murphy had the ball on the halfway line with acres of space in front of him. Ayoze Perez was to his right but he decided to go alone until he reached the penalty area when he rolled the ball back to Shelvey. The midfielder simply kicked the ball off Nedum Onuoha which won a corner.

Soon later, there was a collision of heads between Ciaran Clark and Jamie Mackie which led to a few minutes of the game delayed. Mackie was provided with a bandage however Clark raced down the tunnel so he could receive stitches before returning back onto the pitch.

Another chance was squandered by Queens Park Rangers, this time Pawel Wszolek struck a firm cross that was sent straight into the hands of Karl Darlow.

The away team finally got back on level terms on the stroke of half time. Jake Bidwell’s deflected shot fell on the goal-line to Conor Washington who tapped the ball into an open goal. It was coming for a large amount of time and they were lucky enough to do it on forty five minutes. The home team walked into the dressing room at half time with immense frustration because of that late first half equaliser.

Ten minutes into the second period, Newcastle were back on top. Matt Ritchie met Isaac Hayden’s looping cross at the back post and directed it into the net. The men in black and white were back on top but it was a question of whether they could hold onto their second lead of the match.

The goal looked to have given the hosts more momentum and confidence. Jonjo Shelvey eased past his man and unleashed a shot from the edge of the eighteen yard box. It looked like it was about to fly into the far top corner but Alex Smithies managed to tip the ball wide.

A change in tactics was made by Benitez. Sammy Ameobi entered the pitch on the wing replacing striker Daryl Murphy. This saw Yoan Gouffran move up front, the role in which he flourished in against Birmingham City as he bagged a goal.

Sammy Ameobi went down on the right flank and replays show that Joel Lynch stamped on the winger after he was on the floor. This incident was followed up by fourth officials discussing it. Despite this only a free-kick was awarded and Lynch did not receive any further punishment. The following free kick was taken and it fell to the feet of captain Jamaal Lascelles, who put his shot horribly wide of the goal.

In the final fifteen minutes, Ayoze Perez had a chance to kill off the game. He was one on one with the QPR goalkeeper, but his shot did not trouble Smithies. He then had another chance this time for a cross, but unfortunately he over-hit the ball. The young Spaniard was soon substituted by Mo Diame’, who had come back from his time off at the African Cup of Nations with Senegal.

However, In the dying moments of the game, QPR were level. Confusion between Ciaran Clark and Karl Darlow saw Clark head the ball into his own net. Excluding the away fans  St James’ fell silent in shock of the undeserved away goal. They pretty much dominated in the second half.

A point for the toon army put them four points clear of Reading in third place with a game in hand. As well as this they were one point off  Brighton at the top of the table; Brighton having one game in hand over Newcastle.

As for Ian Holloway’s Queens Park Rangers, they were up to eighteenth and nine points off the relegation zone. A frustrating end to the game for Newcastle but they host Derby on Saturday and will be hoping to bounce back and pick up the three points.