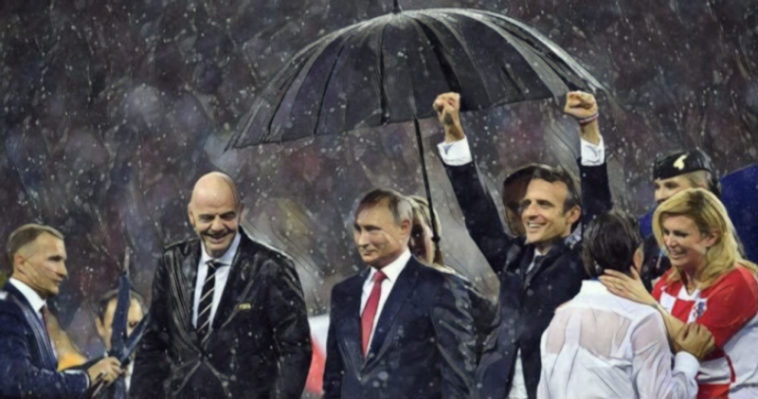 The sheer scale and grandeur and importance of a World Cup final inevitably means that anything that occurs in that final becomes momentous and unforgettable, its significance significantly heightened by the occasion.

Take Zinedine Zidane’s headbutt that was implanted into Marco Materazzi’s chest in 2006. Had that taken place in a Champions League clash it would have been all anyone was talking about on social media. For a few hours at least, until the next big drama unfolded in the never-ending soap opera that is football.

In the Olympiastadion however, on the biggest stage of them all, the French midfielder’s flash of insanity halted the world spinning on its axis. It’s an image billions of us will take to our graves.

Then there was Ronaldo’s hotel room seizure eight years before. In normal circumstances, the Brazilian forward’s misfortunes would surely have been hushed up, but there was no way of doing so here, not with planet Earth watching on, absorbed by every minor detail.  Documentaries have been made about the incident since.

The five stories below may not have received the same level of attention – with some only coming to light many years later – but they are further examples of a simple and inescapable truth. That when football puts on its most extravagant event, individuals lose all sense of reason.

With Italy having secured the hosting rights to the competition’s second edition in 1934, the country’s fascist dictator Benito “Il Duce” Mussolini quickly recognized the propogandist value in putting on a global show. Subsequently, no expense was spared in building new stadia and improving transport links for fans to attend games.

In return of course, the feared leader demanded only one thing – that the Azzurri won the tournament and won convincingly so as to promote his nation’s might and reflect well on his repugnant ideology.

Mussolini’s resolve only hardened on the day of the final when Czechoslovakia – Italy’s opponents – politically aligned themselves with the Soviet Union. This was now, in effect, a pre-cursor to an awful world war played out on a football pitch.

Immediately prior to kick-off the Swedish referee Ivan Eklind was summoned to the dictator’s box whereupon a private conversation was had. Or rather Mussolini talked while Eklind listened.

Italy won the contest 2-1, with the foreign press bemused at the lenient officiating of their physical challenges.

Hosting the World Cup that year, Brazil’s march to the final was pre-empted by a three-week carnival in Rio de Janeiro. That’s not meant in a figurative fashion. There was literally a carnival across the city that lasted for three weeks.

Also prior to the game, played in the Maracana, a stadium that officially held 180,000 but on that day saw 200,000 crammed into every nook and cranny, there was the final rehearsal of a song written for the occasion. It was entitled ‘Brazil the Victors’.

Only then A Selecao lost to their South American neighbours 2-1, and amidst the shock and despair, a prolonged national mourning followed.

Known as the ‘Maracanazo’ – translated as the ‘Maracana blow’ – it’s a result that has cast a dark cloud over the nation ever since, for all of their subsequent successes.

The immediate fall-out meanwhile was quite staggering.

Brazil’s manager reportedly snuck out of the ground disguised as a nanny, while inside two spectators flung themselves from an upper tribune to their deaths. Newspapers refused to print coverage of the game, in denial of its happening, while unforgivably the goalkeeper Moacir Barbosa was scapegoated for the defeat for the rest of his life. “The maximum punishment in Brazil is 30 years imprisonment,” Barbosa said half a century later. “But I have been paying, for something I am not even responsible for, for 50 years.”

Finally, Brazil’s famous canary yellow shirts and blue shirts. They’ve always worn those colours, right? In fact, their national kit used to be white but was changed forever more after the tragedy of ‘Maracanazo’.

Off with a bang

A short one but a doozy.

The first ever World Cup final was held in Montevideo, Uruguay, between the hosts and neighbouring Argentina.

So great was the distrust between the sporting nations that Uruguay provided the match-ball for the first half, with the visitors doing likewise for the second.

After the game it was revealed that police had confiscated over 1500 revolvers from fans entering the Estadio Centenario.

This is not a tale that directly relates to the 2006 World Cup final, that has gone down in infamy for Zidane’s ‘Glasgow handshake’. That’s because one of the story’s chief protagonists resided on the bench throughout, distrusted by French boss Raymond Domenech. The other was kicking his heels at home, having fallen out with the national coach two years earlier.

A fervent astrologist, Domenech placed great importance on his player’s star signs, believing them to reveal much about their character. Regrettably, for the unused sub Mikael Silvestre and the shunned Robert Pires, they were a Leo and Scorpio respectively and this meant the Manchester United defender was a ‘show-off’ and Pires was unscrupulous.

“All parameters must be considered,” the eccentric gaffer said at the time, in explanation of his highly unusual selection process. Yeah okay mate.

The 2018 final in Moscow offered up several weird and wonderful moments not least the sight of Vladimir Putin underneath an umbrella at the presentation ceremony, while everyone else got drenched under a torrential downpour.

The pitch invasion by four members of the feminist punk rock group Pussy Riot tops that however, the activists running on dressed as policemen, so as to reach the touchline. Rather brilliantly, they gained access by convincing a steward they were looking for four potential pitch invaders.

With the world – and a clearly vexed Putin – watching on, Veronika Nikulshina capitalized on her all-too-brief fame by high-fiving Kylian Mbappe in the centre-circle.