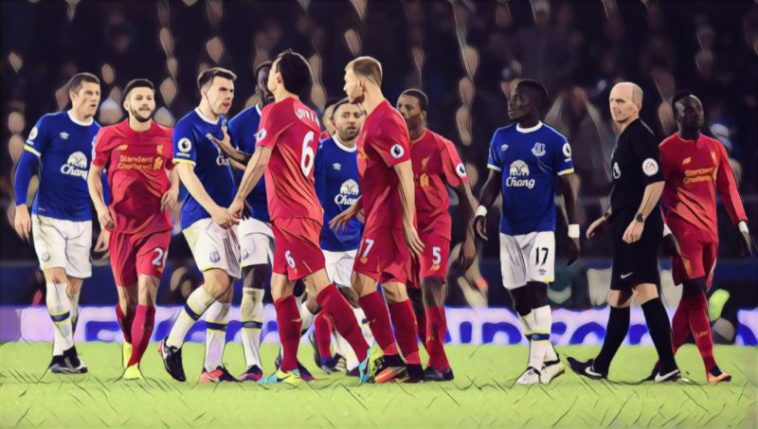 The latest Merseyside derby is upon us, and this time, Everton actually sit above their fierce local rivals Liverpool in the top-flight table.

Tomorrow’s clash between Carlo Ancelotti’s high flying Toffees and Jurgen Klopp’s Premier League champions promises to be a fascinating encounter, so here, to whet your appetite, is a look back on five of the best Merseyside Derbies.

Hang on Liverpool fans, you’ll get your moment. Everton wins are hard enough to come by, so we had to dig deep for this one.

The Toffees hadn’t beaten their city rivals in 15 games, or 7 years, but when the ball dropped for Andy King he smashed it in to the top corner to send the home crowd wild.

Another old one but a day to remember for Liverpool as they destroyed Everton on their home turf. Ian Rush did the damage, running the backline ragged and scoring four. Enjoy the goals but really enjoy the old school Match Of The Day footage.

An absolute classic. End to end with goals from Coutinho, Suarez, and Sturridge for Liverpool. Everton scored through Mirallas and a double from Romelu ‘doesn’t-show-up-for-big-games’ Lukaku. Six goals but there could, and probably should, have been 10.

Oh, but we apologise for the music…

Another draw, but another classic game between the Merseyside clubs. Liverpool were two up thanks to a Luis Suarez double only to be pegged back by goals from Leon Osman and Steven Naismith, but for all that, the game will be remembered for Suarez’s sarcastic celebration in front of David Moyes after the Everton boss had suggested that he went down too easily.

This game had everything. Two controversial penalties, 12 bookings, a sending off, a missed penalty from Robbie Fowler and, with the scored locked at 2-2 in the 94th minute, a long-range free kick to win it from Gary McAllister. What a game!

Read – Strange days: Why Everton, Leicester and Spurs are in the reckoning to win the Premier League this season