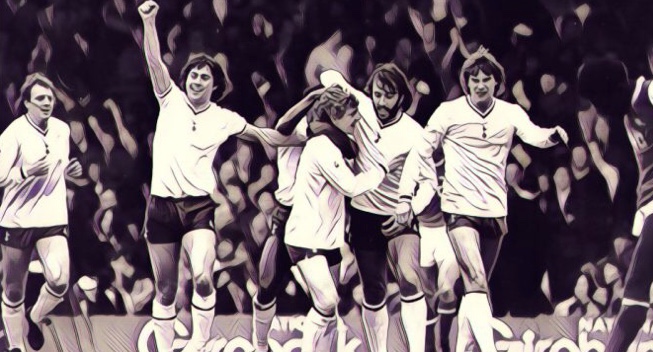 As any regular visitor to this site will know, we love looking back at the Best Football Quotes from down through the years.

“Any player coming to Spurs whether he’s a big signing or just a ground staff boy must be dedicated to the game and to the club. He must be prepared to work at his game. He must never be satisfied with his last performance, and he must hate losing.” – Bill Nic

“If you don’t have to drag yourself off the field exhausted after 90 minutes, you can’t claim to have done your best.”– Bill Nic

“It’s magnificent to be in Europe, and this club – a club like Tottenham Hotspur – if we’re not in Europe…. we’re nothing. We’re nothing.” – Bill Nic

”When they used to come to Tottenham we’d play Who’s Gonna Drive You Home? Just to wind them up.” – Chris Waddle

”Even now, when I go over to my mother’s house and dig out the old tracksuit tops I wore, it makes the hair stand up on the back of my neck. I like to think i am part of a special family. I am no longer connected with the club on a daily basis, but I’m delighted with every win and sad about every defeat.” – Steve Perryman

”Bill eventually became Mr Tottenham Hotspur, and produced such a dazzling team at White Hart Lane that they won the double and played the game in a way that was an object lesson to everybody” – Brian Clough

”Bill Nick always wanted us to win with style and entertain the fans. If we won a game and we’d played badly, he was disappointed ”– Cliff Jones

”My brother was a West Ham fan.He took me to Upton Park but when I came to my senses at the age of about 12 I became a Tottenham fan” – Teddy Sheringham

” Its been my life, Tottenham Hotspur, and I love the club.” Bill Nic