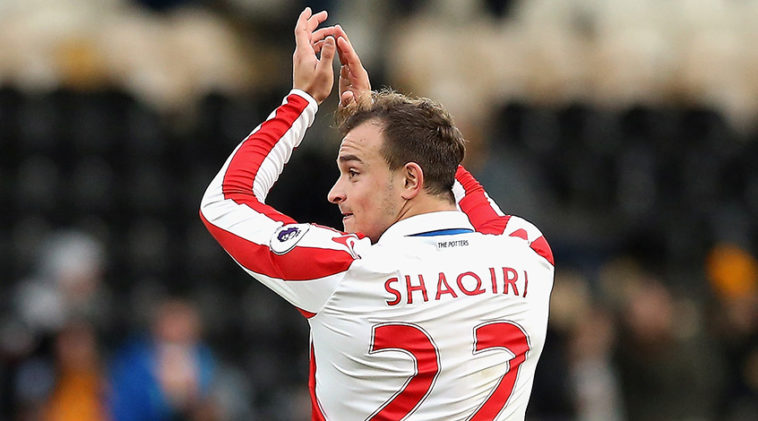 Often nicknamed ‘the Alpine Messi’ the diminutive winger has often been touted as one of Europe’s big up and coming talents. But now 25, has Shaqiri lived up to his billing or is he just overrated?

Shaqiri came to the attention of most of Europe after a fine season with Basel in 2011/12. This featured a fine performance against Manchester united in which he got 2 assists.

At just 20 years old Shaqiri signed for one of Europe’s heavyweights, Bayern Munich for €11.6million. During his Bayern Munich career Shaqiri was constantly touted as a player with enormous potential and even the successor to Arjen Robben. He scored 11 goals in 52 appearances for Bayern, including some spectacular long range efforts. But after an injury hit season he was sold to Inter Milan, for whom he only made 15 appearances.

Shaqiri then made a move which shocked most of the footballing world by joining mid table premier league side Stoke City.

As a Stoke fan myself, I was incredibly excited about Shaqiri coming to play for the club. Even I can admit Stoke is some step down from Bayern and Inter.

I accepted that he was most likely joining Stoke to try and get his career back on track, as well as take the chance to play in the Premier League.

However, Shaqiri has been inconsistent to say the least. Scoring only 3 goals last season, Shaqiri was quite often given the benefit of the doubt due to his niggling injuries which often ruled him out of the team. But coming to the end of his second season in the Premier League, it’s time to ask where his career will go from here?

From watching him most weeks it’s clear to see that Shaqiri is still a highly talented winger. In spite of being only 5”6 tall Shaqiri has an incredibly muscular figure. Infamous online for his unbelievably large calves, he often uses his strength to hold off fullbacks and shield the ball.

As well as his physicality Shaqiri has incredible technical ability including close dribbling, precision passing and powerful long shots. But one ability that makes him stand out in the stoke team are his tricks. Often employing the ‘flip-flap’ Shaqiri can be a nightmare for defenders to try and stop.

Shaqiri very has also become known as a scorer of only beautiful goals. And with a collection ranging from his magnificent chip against Everton, to his unbelievable bicycle kick at the Euros, you can’t say he’s not entertaining to watch. With all these attributes, it’s hard to figure out why he isn’t still playing for a European giant such as Bayern.

Unfortunately for Shaqiri this is due to incredibly frequent injury problems. Frustratingly for most Stoke fans; as soon as he displays good form he ends up being injured the next week. Often small muscular injuries, Shaqiri seems to be injured more often than fit.

Many Stoke fans are of the belief that Shaqiri is overly cautious with his fitness and pulls out of games with the slightest of niggles. The fans of the club are used to watching players like Jonathan Walters and Andy Wilkinson, who would play through any level of pain, you can understand the criticism.

But now, as young Ramadan Sohbi is putting in some great performances on the wing, does Shaqiri have a future at Stoke?

Shaqiri was often at his best when he was near Marko Arnautovic on the pitch with the two often linking up well together. Perhaps Stoke manager Mark Hughes will find a place for Shaqiri in the team as a number 10, as he plays for his country Switzerland. But as Joe Allen enjoys a fine goal scoring season in that role, there may be no room for Shaqiri even when fit.

So will Shaqiri manage to get back to the top of European football or is he destined to carry on struggling to find form at Stoke City?

Please leave us a comment below, and support Football Faithful by sharing this article on social media.