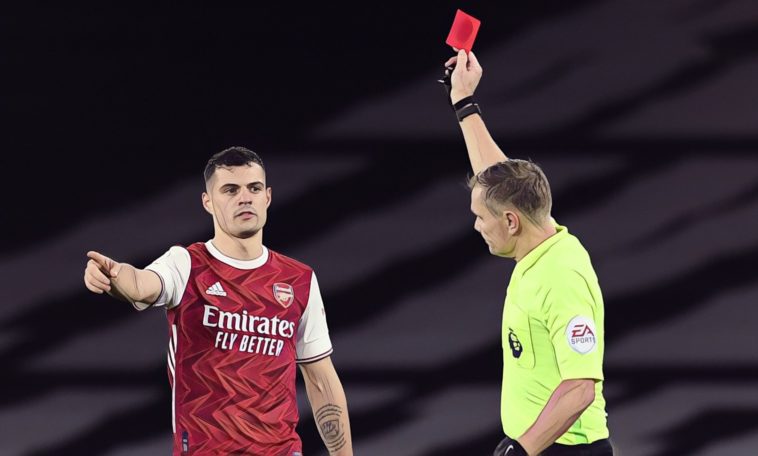 Granit Xhaka has opened up on his reputation as a rash tackler and occasionally losing his head.

Xhaka has been sent off four times since making his Premier League debut back in 2016, more than any other player during that time, and has developed a reputation of going over the top in his challenges and losing his head in the heat of the battle.

Having initially being booked for a late challenge on Burnley’s Dwight McNeil last December, Xhaka saw his card upgraded to a straight red after he inexplicably grabbed Ashley Westwood by the throat in the resulting melee.

Xhaka has admitted that he enjoys seeing tackles in the game, but feels that he is sometimes judged more harshly by referees compared to other players.

“I love to see tackles but they have to be fair,” Xhaka told The Athletic. “I don’t like to see someone injure a player on purpose — nobody does I think. But tackling is part of our job. My passion is to win and not let the opponent have the ball.

“We are all human beings and make mistakes but it only comes from a place of passion. When I came to the Premier League everybody said in this league you can go very hard and I love it, this is exactly my game and what I want to do.

Granit Xhaka is sent off for violent conduct after grabbing Ashley Westwood by the throat! 😳

“But when you see some tackles and imagine if I was in this position? I would be sent off straight away. This stops me sometimes to go in how I really want. If I really go how I want I will get a red card every three or four games.”

The Swiss international admits that his perceived reputation often prevents him from making the more risky challenges.

“This makes me do things in a different way sometimes because I know that my risk compared to the risk of other players is not the same. If I risk I know I am closer to a red card than any other player in the Premier League. Maybe I am wrong but that is what I feel. So sometimes in a game I stop myself from going for the risky ones because if I get a red card it all starts up again. I don’t want to give arguments for others to speak about me for stupid things. I try not to risk too much.

“When I once got a red card, the referee said to one of my team-mates, ‘You know how Granit is, he loses his head’. This feels wrong. Just because I lost my head against Burnley, for example, it is not like I lose my head every time. To put me in this box like this I believe is wrong.”