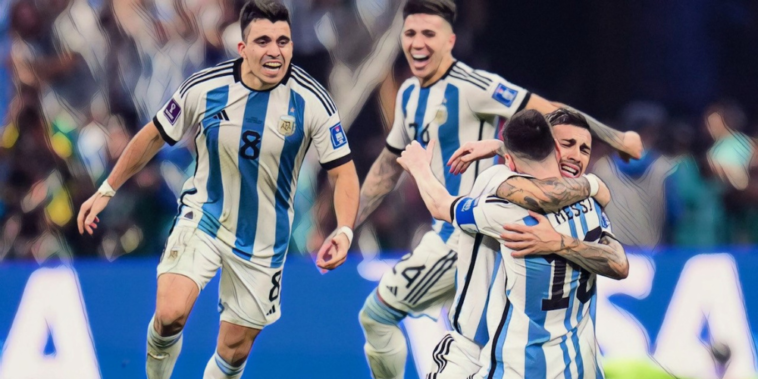 Our World Cup awards honour the best – and worst – of the 2022 tournament in Qatar.

Has there ever been a more enthralling final? Weeks of thrilling action concluded in engrossing fashion, as Argentina and France played out a classic in Qatar.

It looked set to be Argentina’s night as the South Americans raced into a two-goal lead, but Kylian Mbappe changed the narrative with two goals in two minutes to force extra time.

The momentum swung again in the added period as Argentina regained the lead, but Mbappe levelled once more from the spot – becoming just the second man to score a World Cup final hat-trick.

A World Cup final that will go down in history 🤯 pic.twitter.com/mzMJM2pi6s

It was Argentina who held their nerve in the ensuing shootout, with the wild celebrations our Moment of the Tournament. La Albiceleste have been the best supported side at the finals and their fans will have celebrated long into the night.

As Gonzalo Montiel converted the winning spot-kick, their players crumpled to the ground. The image of Lionel Messi, slumped to the turf and smothered in teammates, will be one that lasts a lifetime.

The 35-year-old scored seven goals and provided three assists as Argentina were crowned world champions for a third time, their first triumph since 1986 built on the brilliance of Messi. At times he was utterly unplayable, including in the semi-final destruction of Croatia.

His assist in the quarter-final win over the Netherlands was out of this world, a moment which made the watching world applaud his genius. It wasn’t so long ago that Messi’s record in international football was questioned, but those questions are no more.

Copa America. Finalissima. World Cup. Messi has won them all.

The word legend is banded around far too easily in football. For Messi, it often feels not enough. His claim as the greatest of all time now has significantly more weight behind it, even if for some it was never really up for discussion.

Manager of the Tournament

Morocco were the underdog tale that captivated an audience, as the Atlas Lions upset the odds to reach the last four. No African team had ever reached a semi-final, but Morocco topped a difficult group before upsetting Spain and Portugal to make unprecedented history.

The mastermind of Morocco’s success was Walid Regragui, who was only appointed as head coach in August. He brought back Hakim Ziyech and Noussair Mazraoui from international exile and built a side around his squad’s strengths.

Walid Regragui has only been in charge of Morocco for 3 months.

Hakim Ziyech came out of international retirement for this World Cup

This Morocco team are the story of this World Cup 👏🇲🇦 pic.twitter.com/kV9NB5ts6p

Their organisation and defensive discipline was a standout in Qatar, as the Moroccans failed to concede a goal from an opposition player until their semi-final defeat to France. An unpopular appointment just months ago, Regragui is now a firm favourite in Morocco.

Brazil’s elimination in the quarter-finals was a surprise, with the tournament favourites beaten in the last eight.

Tite’s side had shown encouraging signs prior to their loss to Croatia, including a number of moments that encapsulated the flair of Brazilian football. The best of them came from Richarlison, who scored this stunner against Serbia.

The improvisation, acrobatics and technique were superb from the Tottenham forward, whose moment of magic is a fitting winner of our Goal of the Tournament Award.

Breakthrough Player of the Tournament

Luis Enrique led the praise for Azzedine Ounahi, taking time from his reflection on Spain’s exit to laud the performance of the Moroccan midfielder.

Ounahi was not a name on the radar of Europe’s top teams before a ball had been kicked, with Enrique admitting his surprise at the level of the 22-year-old in Qatar.

Ounahi was playing third tier football in France just 18 months ago, while his domestic season to date has been in a struggling Angers team at the bottom of Ligue 1. At the World Cup he shone, going toe-to-toe with more established opponents and often coming out on top.

Azzedine Ounahi's World Cup is over but his journey has just started 🙏 pic.twitter.com/PzD4OrCMzD

Alongside the excellent Sofyan Amrabat he was the driving force of Morocco’s campaign, exuding confidence in possession and working relentlessly to cover the ground in midfield. It would come as little surprise to see a leading club take a chance on the promising Ounahi this winter.

Shock of the Tournament

It seems a long time ago now, but Saudi Arabia’s upset of Argentina was a stunning result.

In a tournament that had been dominated by headlines off the pitch, it was a result which demonstrated the best, and unpredictability, of World Cup football. Argentina had dominated the opening exchanges, with Lionel Messi opening the scoring before the South Americans had three goals disallowed for offside.

Argentina started this World Cup with a 2-1 loss to Saudi Arabia.

They ended it by winning the greatest World Cup final ever 🏆 pic.twitter.com/v503f1gBwA

What had appeared a one-sided contest was flipped on its head after half-time, as Saleh Al Shehri levelled and Salem Al Dawsari scored a superb winner. The defeat ended Argentina’s 36-game unbeaten run that had stretched three years, while Saudi celebrated one of the World Cup’s greatest ever upsets.

Stat of the Tournament

A reminder that Kylian Mbappe is just 23-years-old…

4 – Kylian Mbappé has scored more World Cup final goals than any other player in the tournament's history (4). Steel. pic.twitter.com/7rh6sTNcek

Disappointment of the Tournament

Belgium entered the World Cup as FIFA’s second-ranked nation, but exited the competition at the group stage after a woeful tournament.

The Belgian’s build-up was not aided with Kevin De Bruyne’s comments, who claimed the nation’s ‘Golden Generation’ had missed their chance at World Cup success in 2018 and were too old to compete in Qatar.

De Bruyne’s comments came true during a disastrous tournament for Roberto Martinez’s side, who scored just once in three games. Their talented team has reached the end of its cycle and look set to be remembered as a case of what might have been.