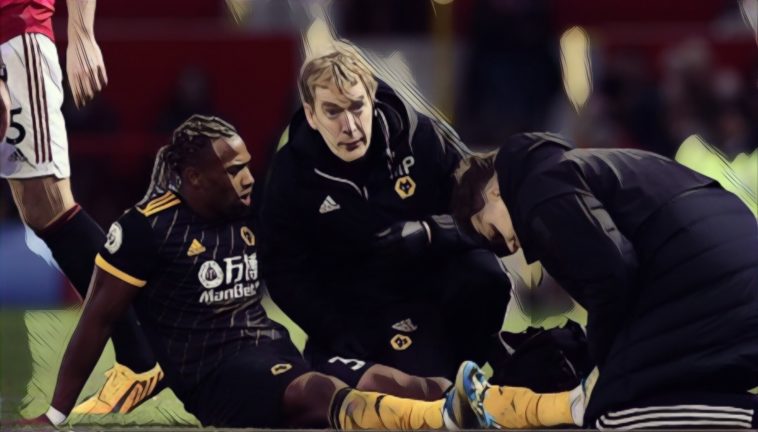 Wolves secured a well earned point at Old Trafford on Saturday evening, but it came at the expense of an injury to one of their most impactful players.

While the rest of the Premier League was enjoying goal fests left, right and centre, the supporters in attendance were forced to endure a rather humdrum contest for 95 minutes, with the most notable feature of the game being the debut of Bruno Fernandes.

The influence of Manchester United‘s latest permanent signing was clear to see, as Ole Gunnar Solskjaer’s charges took 10 of their 15 shots from outside the box, with Fernandes almost catching out Wolves goalie Rui Patricio in the second half.

It was Aaron Wan-Bissaka who set up the best chance of the game late on, crossing the ball for Diogo Dalot, only for the Portuguese full-back to hit the ball agonisingly wide. The visitors were the more dangerous of the two sides inside the box, but that did little to enhance this encounter as a spectacle.

In truth, the result suited neither club, as the hosts lost ground on the top four race by falling to fifth in the table behind Sheffield United, while Wolves remain in seventh tied on points with Saturday’s opponents and no closer to the Champions League spots.

“I think it was a good game, an intense game. I think first half was good. There was a second-half spell United dominated and created a lot of problems. We had our moments. I am happy. The boys worked very hard and it was tough.

“I think in the first half our idea was clear to control the middle of the pitch and we had a lot of counter attacks. It was good but it was a balanced game.”

Nuno confirmed to the media that star winger Adama Traore had indeed suffered a dislocated shoulder in the first-half, but continued playing on regardless, before being forced off with an ankle injury.

“At half time Traore was in a lot of pain in the shoulder, but he continued. After that it was a kick on the calf, but he is ready to go.”

See Also: Six Premier League records that could be broken this season