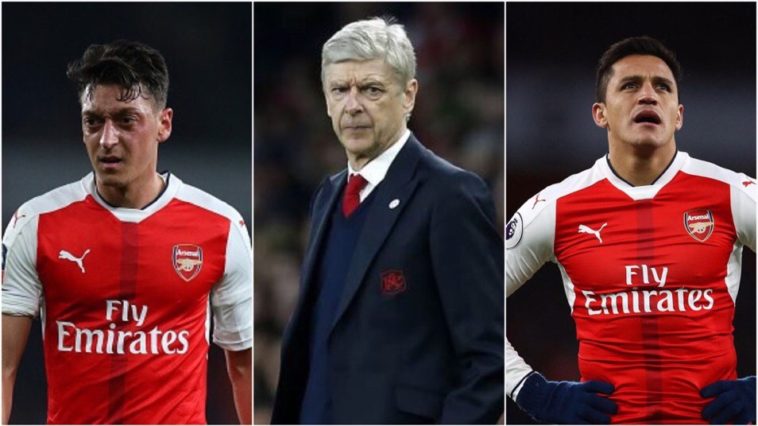 One thing that has been having a significant impact on Arsenal’s recent poor results is the future of some very important people at the club. Arsene Wenger, Alexis Sanchez and Mesut Özil are at the top of that list.

A majority of Arsenal fans want Arsene Wenger to not sign that new contract that is already on his table. The Arsenal fanbase is completely divided at the moment which is a worrying sign for any football club.

It is believed that Arsene Wenger has been told by the club to make a decision about his future during this ongoing International break. While he did say that he has already made up his mind and will let us all know “very soon” about what he has decided, it is expected that he will finally reveal his decision after the International Break.

The manager really needs to come out and clarify one way or another.

If a new manager is going to come in, he will need more than just the there months of May, June and July to plan for the next season. Simply because, to change things at a club who have been running with the same philosophy for 20 odd years might require time. You only need to look at Manchester United post Ferguson to prove this.

With the potential departures of Mesut Özil and Alexis Sanchez in the summer, that would make any new manager’s task even tougher.

Alexis Sanchez is a player who looks like he’s on his way out.

He has just over a year left on his contract. The Premier League’s top scorer has been a very important player for Arsenal this season with 23 goals and 12 assists in all competitions.

However, his body language on and off the pitch on several occasions does make us wonder if he is actually happy at Arsenal or is he moving on to bigger things next season. As of now, it certainly looks like he is not going to renew his contract at the club. It will be very difficult for Arsenal to replace someone as good as Alexis Sanchez.

What Arsenal need to make sure is that if he does leave, that they don’t end up selling him to a Premier League rival. Arsenal have sold plenty of their top stars in the past to rival clubs. Take a look at what happened with Samir Nasri and Robin van Persie. Both were sold by Arsenal and went on to win the Premier League tit’ll with their respective clubs.

Mesut Özil is another player who has just over a year left on his contract. The German International has won the German Player of the Year award for the 5th time in the last 6 years.

However, he hasn’t been in great form since December. He has been out with injury and illness for some time as well. But the magic that the midfielder creates on the field is why any team would like to have the attacking talisman.

Özil has already proved himself to be a top player at big clubs like Real Madrid and Arsenal. It is incredibly important for Arsenal to somehow manage to keep him at the club. Whether they can or not is a different matter.

Rumours are now beginning to emerge of interest from Bayern Munich. It will only hurt Arsenal fans to see a player of such calibre leave the club. Most importantly, it will be alost impossible to find a replacement for such a quality player.

Jack Wilshere’s Arsenal contract expires in the summer. No new contract has been offered to the England international as of now. But his future chiefly depends on who the Arsenal manager will be next season.

If Arsene Wenger stays, Wilshere will be offered a new contract for sure. But whether he will be a part of a new Arsenal manager’s plans, is a major doubt.

His ability was never in question, but his fitness always was. His fitness has improved drastically this season as he has managed to play for Bournemouth week in week out. If you look at the kind of football Arsenal like to play, he provides that extra special something that normal English midfielders don’t give you. So Arsenal must make sure he is at the club next season.

We might see a lot of new faces at Arsenal next season. Will it just be new faces or will it be new faces with different results, is what we will have to wait and find out.