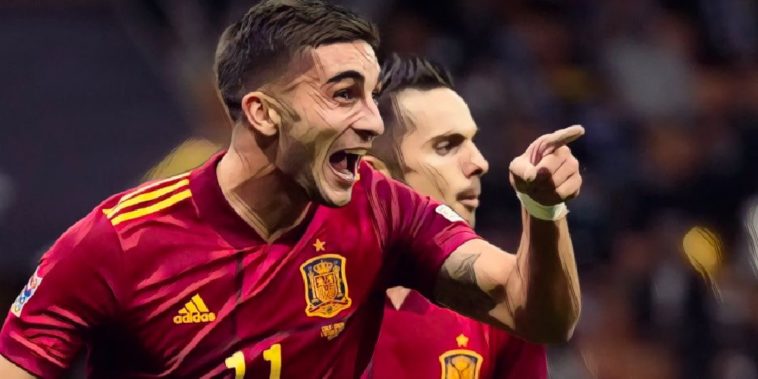 The typically dreaded international break is often an unwelcome distraction from the domestic season, yet the latest round of fixtures has served up some thrilling and high-scoring contests, with Premier League players unsurprisingly at the forefront of the entertainment.

The major headline from the week was France’s victory in the Nations League, as they added to their World Cup crown with a narrow win over Spain in the showpiece, having come from behind to complete a stirring comeback in the semi-final against Belgium.

While that competition was the major attraction, elsewhere Scotland secured a dramatic victory against Israel to boost their World Cup hopes; Wales played out a thriller in Prague and England all-but wrapped up qualification after trouncing Andorra.

Following that action, here’s The Football Faithful’s pick for the best XI from Premier League players who impressed on international duty.

France’s fabulous forward line may get all the plaudits following their Nations League win, yet manager Didier Deschamps’ will be incredibly thankful for the impressive displays of his captain Hugo Lloris, who produced pivotal saves against both Belgium and Spain.

In the semi-final clash, the Tottenham Hotspur ‘keeper twice denied Kevin De Bruyne, notably making a stunning acrobatic save inside just three minutes to somehow tip the playmaker’s strike around the post.

This Hugo Lloris save! 🤯🇫🇷 pic.twitter.com/17CCGefu3Q

With Les Bleus having snatched a dramatic late win in that clash, it set up a showpiece showdown with Luis Enrique’s side, where Lloris was once again integral to sealing the win, with the veteran stopper producing a string of fine saves in the closing stages as his side withstood a late Spanish onslaught.

One of the few friendlies taking place at the weekend saw Portugal run out 3-0 winners at home to Qatar, with Manchester United defender Diogo Dalot arguably one of the star performers after a hugely impactful display from right-back.

The 22-year-old – who spent last season on loan at AC Milan – has found game time hard to come by at Old Trafford this season and struggled on a rare start against Villarreal recently, yet illustrated his attacking talents against the World Cup hosts.

A wicked early cross found club colleague Cristiano Ronaldo who surprisingly lashed wide, before Dalot once again picked out the veteran forward – albeit via a deflection – and the all-time international top goalscorer made up for that earlier error to tap home for his 112th goal for his country.

It’s been a slow start to life at Tottenham Hotspur for Cristian Romero, yet the on-loan Atalanta man continues to impress for his country, starting the last two games and recording successive clean sheets for Argentina.

His last international involvement had ended in controversy last month as his breach of Covid regulations – alongside fellow Premier League stars Giovani Lo Celso and Emi Martinez – saw health officials storm the pitch in Brazil to halt proceedings, with the highly anticipated game eventually suspended and with the defender forced to quarantine in Croatia before returning to the UK.

This international break has then been much smoother for the 23-year-old, as he started in the 0-0 draw with Paraguay and in the comfortable 3-0 win over Uruguay, as goals from Lionel Messi, Rodrigo De Paul and Lautaro Martinez helped edge them closer towards qualification for Qatar.

With few real standout centre-back displays over the past week, we’ve opted for Colombia defender Yerry Mina, after he helped his country to back-to-back clean sheets against Uruguay and Brazil over the past week in World Cup qualification.

The Everton defender was imperious in both fixtures, first shackling an exciting attacking line up that included the likes of Darwin Nunez, Luis Suarez and Manchester United’s Edinson Cavani, having previously irked the opposition during the Copa America for his dancing celebration midway through their eventual penalty shootout victory.

Having claimed a 0-0 draw in that clash on Friday, Mina and co followed that up with another goalless draw against Selecao on Sunday, the 27-year-old putting in a colossus showing to thwart Neymar and the like, with the two sides left having to settle for a point at the end of a fiesty encounter.

Yerry Mina doing what he does best in #SeleccionColombia 🇨🇴 0-0 draw with 🇧🇷 pic.twitter.com/QPcBmSTGNk

Scotland skipper Andy Robertson was at creative best on Saturday, as he played an integral role in helping to steer Steve Clarke’s side towards a vital victory over Israel to bolster their hopes of qualifying for next year’s World Cup.

A goal down after just five minutes, the Liverpool man sparked the hosts into life with a surging run from the left to set-up John McGinn, with the Aston Villa midfielder continuing his fine goalscoring form at international level to curl his effort into the top corner.

Having conceded just moments later and seen Lyndon Dykes squander a golden opportunity from the spot, Robertson once again dragged his side back into the game midway through the second-half, the 27-year-old whipping in a typically brilliant cross for Dykes to atone for his earlier error and draw the home side level.

It may have been against lowly Andorra, yet Phil Foden produced a midfield masterclass on Saturday evening to help England breeze to an unsurprising 5-0 victory, with the result edging them ever closer towards the finals in Qatar.

Having been so brilliant against Liverpool for Manchester City off the left last weekend, the 21-year-old slotted into central midfield for Gareth Southgate’s much-changed side, yet was equally as impressive as the main creative force for the Three Lions.

A delightful clipped ball over the top handed Ben Chilwell an excellent headed chance early on, before Foden then played a pivotal role in the left-back’s goal after another lofted pass found Jadon Sancho – who unselfishly squared to the Chelsea defender for his first goal for his country.

The City youngster then got an assist of his own just before half-time with another exquisite ball that set Bukayo Saka free on goal and the Arsenal starlet duly fired in to give the visitors a 2-0 lead at the break.

Another star performer in Scotland’s win over Israel, Billy Gilmour showcased his growing importance to Steve Clarke’s side with yet another masterful midfield performance.

The 20-year-old hasn’t quite featured as much as he would have liked on-loan at Norwich City so far this season, yet that lack of action didn’t appear to be a problem as he ran the show at Hampden Park on Saturday, particularly after the break.

The hugely talented Chelsea youngster had done well to earn a penalty for his side late in the first half after bravely putting his body on the line, only for Dykes to lack the composure to convert from the spot.

Honourable mention must also go to John McGinn who once again got on the scoresheet for his country and played a key role in the game’s winning goal, as it was his excellent corner deliver that was flicked on by Jack Hendry to be bundled home by matchwinner Scott McTominay.

Completing our midfield is McTominay’s Manchester United teammate Paul Pogba, with the polarising Frenchman so impressive as ever for his country, producing two dominant displays against both Belgium and Spain to help steer his side to Nations League victory.

There was a shaky first-half for the 28-year-old and his team against Roberto Martinez’s side, yet they recovered well to stun their rivals in the second period, with Pogba a real driving force in midfield, while he also went close with a curling free-kick late on that struck the crossbar.

United supporters were perhaps tearing their hair out at seeing the midfielder perform so well in a midfield two, although the former Juventus man was no doubt aided by the deployment of a back five, which gave him the licence and the freedom to bomb forward and the join the attack, as he did to great effect in the final to help alleviate the late Spanish pressure.

🗣"We come back now with two beautiful games."

Paul Pogba is happy with France bouncing back from a disappointing Euro 2020 campaign with a win in the UEFA Nations League. pic.twitter.com/WAbSjNj8C5

A word must also be said on Kevin De Bruyne who was notably exceptional in the first-half against France, setting up both of the Belgian goals, while he also registered a third assist of the week in the 2-1 defeat to Italy in the futile third-place play off.

Jadon Sancho showed flashes of real quality for England on Saturday, while Leeds United’s Raphinha sparkled on debut for Brazil against Venezuela, yet we’ve gone for Manchester City winger Riyad Mahrez after his brace for Algeria in the win against Niger.

The Ballon d’Or nominee helped his side to a thumping 6-1 victory to extend their unbeaten run to 30 games, with the 30-year-old bagging the game’s opening goal with a stunning free-kick from long range.

With the hosts then 2-1 to the good, Mahrez added his second of the night from the penalty spot on the hour mark to extend that advantage, before three goals in the final 20 minutes – including two from former Leicester City teammate Islam Slimani – sealed a convincing win.

While it all ended in heartbreak for Spain after their showpiece defeat to France, they are continuing to show signs that they are once again a team to be featured, with the blend of youth and experience working perfectly for manager Luis Enrique.

One of those young stars – albeit something of a veteran in contrast to emerging 17-year-old midfielder Gavi – is Manchester City man Ferran Torres, with the versatile forward continuing his excellent goalscoring record for his country by netting a brace in the semi-final win over Italy.

His 11th and 12th goals for his country – in just 22 appearances – showcased how effective he can be when deployed through the middle, his first seeing him guide the ball home after Mikel Oyazarbal’s cross, before the two combined again for Torres to head home at the back post after a lovely dinked pick-out.

Having been so lethal in that last-four clash, it was a somewhat strange call from Enrique to move the 21-year-old out to the right for the final, as he failed to have quite the same level of impact, before being withdrawn with Spain chasing a late equaliser.

He may have only played in one of Belgium’s two Nations League games this week, yet Romelu Lukaku made some impact in that solitary outing, terrorising the French defence as the Red Devils ran riot in a blistering first-half on Thursday evening.

The Chelsea striker almost claimed an assist inside three minutes of that semi-final tie as he teed up teammate Kevin De Bruyne, only for Hugo Lloris to somehow deny his firm strike, before the two reversed roles before the break as De Bruyne played in his teammate who duly lashed home at the near post to make it 2-0 – after Yannick Carrasco had scored an opener just minutes earlier.

With the game then level at 2-2 after a France fightback, the 28-year-old thought he’d won it after a clinical finish with just three minutes to play, only for VAR to correctly rule the goal out for a marginal offside.

Theo Hernandez’s 90th minute strike completed a sensational comeback from the World Cup holders, with Lukaku going on sit out Belgium’s third-place playoff defeat to Italy, having pulled out of the squad due to ‘muscle fatigue’.