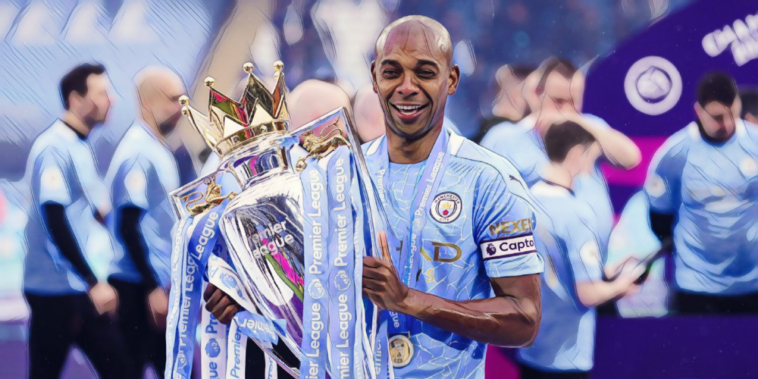 Those four words filled Manchester City fans with genuine sadness recently when their 36-year-old midfielder Fernandinho was asked if he would be extending his contract with the Blues into next season. “I want to play regularly,” the club captain elaborated, referring to his current understudy role to Rodri and his intention to leave has inevitably led to speculation that he will be heading back to South America this summer, speculation incidentally that is very likely correct.

Fernandinho’s departure will end nine years of exemplary service in the Premier League, service that initially had him pegged as an all-action box-to-box midfielder before being reconfigured as the everything in Pep Guardiola’s masterplan. An exaggeration? Not when it’s acknowledged that the former Shakhtar Donetsk foot-soldier has so often been entrusted to perform duel roles as City took dominance of English football, with each function taxing enough to stretch the capabilities of a single player. Fernandinho did both simultaneously and immaculately.

The first of these tasks – his primary function for sure – was that of destroyer, an unenviable responsibility for any top-flight star charged with nullifying counter-attacks from the best of the best but in a City side that regularly exposed its defence it required a one man army. Ferna was that.

Across six seasons under the Catalan’s tutelage, the very un-Brazilian Brazilian found himself in the eye of a hurricane, grafting and ferreting, all high-energy limbs and well-timed tackles and those who focus on his tactical fouling – of which there were admittedly a few – do one of the greatest players of his type to ever grace our shores a tremendous disservice. In 375 games to date in sky blue, Ferna has been cautioned every 4.3 games, a bang-average figure and given he has arguably been the most isolated midfielder in matches of colossal stakes this past decade that is a testament to his consistent ability to retrieve the ball over the man.

More so, it illustrates his remarkable talent to play right up to the edge and rarely cross it. On the occasions a yellow was brandished, City supporters hardly fretted of the risk of dismissal because here was a player who intuitively knew how far he could test a referee’s patience and boy did he test it, time and again, warning after warning. It was a skill – and for a player in his position it is arguably one of the most important skills to possess – that earned him the nickname of the ‘Smiling Assassin’ and earned him too scorn from frustrated rival fan-bases. Good. A destroyer should be unpopular. It invariably means they are doing their job right.

Yet Fernandinho’s wheelhouse involved infinitely more than breaking up play and blocking off passing lanes. He was a million times greater than excelling as the grit in an oyster. Intelligent in possession, leaning increasingly on his experience as he entered his thirties, he was so regularly the set-builder of Guardiola’s fantastical creations, beginning each passage of play that relied on picturesque patterns to bamboozle opponents into ceding the slightest of openings. It was he who was always available to receive a pass, from the back, or from a marauding full-back who had hit traffic, or simply one of City’s architects such as De Bruyne or David Silva desiring a one-two to better improve their angle of delivery.

In seasons that saw City reimagine football for the better, displaying a brand of attacking fare that was inventive and beautiful, it was routinely Ferna who was instrumental in its rightful execution, a player some diminish as merely a number six and others deride as a tactical fouler. Perhaps he wasn’t so un-Brazilian after all.

Fernando Luiz Roza’s omnipresence on the pitch routinely gave the impression there were two of him but covering every blade of grass twice-over per game will give that impression and that, above all else, is why Manchester City fans will miss him dreadfully when he departs. Because ever-prowling in a midfield space he owned outright, he was unfailingly at the very heart of something they adore.

Away from combat too, there is an awful lot to admire with the player settling well in the North-West and raising his young family as Mancunians.  “Me and my family are settled here and year by year, we learn more about the culture, the people, the way they like to live and how respectful they are. I have a special feeling about Mancunian people,” he said last year.

It is a feeling reciprocated ten-fold.