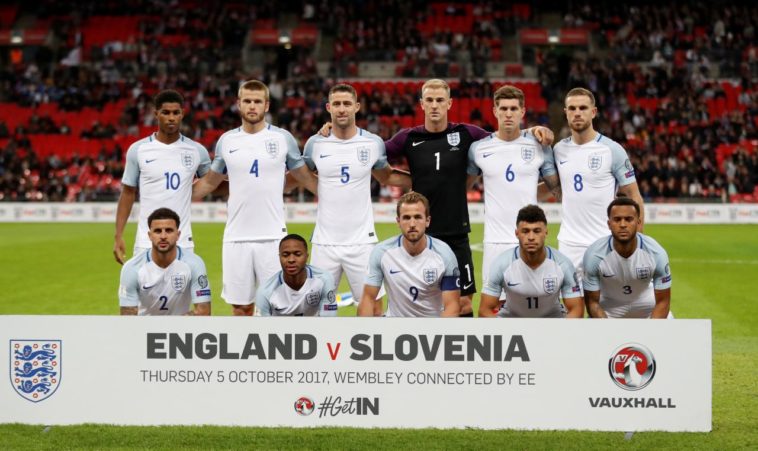 England qualified for the 2018 World Cup in less than convincing circumstances thanks to a dull 1-0 win against Slovenia. So going forward to next summer’s tournament in Russia, what is England’s best XI? We take a look at the stats.

In part one of our article, we looked at the goalkeeper and the defence, with some surprising names already making the teamsheet. Here are the front six players.

This one is a bit of a toughie. Gone are the days of arguing how to play Lampard and Gerrard together, while having to play Paul Scholes out of position. England’s midfielder options just aren’t the same as 10-15 years ago.

For this, we have compared England regular midfielders Eric Dier and Jordan Henderson, to Jack Wilshere, and West Brom duo Jake Livermore and Gareth Barry.

Of course the selection of central midfielders depends on the style of play that one would like to play. However, in a defensive role, Jordan Henderson is the winner. He makes more tackles per 90 minutes than any of the other candidates. He also creates almost three times as many chances than the other fellow defensive minded midfielders.

Meanwhile, Jack Wilshere returned to Arsenal in the last few weeks in good form, and even when you compare his stats for Bournemouth, he was by far England’s most creative midfielder. With an average of over four times more successful take ons than the other candidates as well as more chances created. The question will always remain about his fitness.

The number 10 role is one where England are well stocked. Dele Alli is of course the number one choice for both club and country, but do the stats back it up?

We decided to compare last seasons stats of the Tottenham star, to those of Adam Lallana, Ross Barkley and Jesse Lingard and what was surprising that Alli wasn’t the runaway winner!

The Tottenham man blew everyone away with regards to his goal scoring last season, scoring well over double than any of his rivals. However it was in fact Ross Barkley who created 31 more chances and provided one more assist than the Spurs man.

However, all in all, despite not necessarily being the best in every department, Alli has to just edge it as he is consistently high in all departments compared to the others.

So with Alli playing through the middle, who would play out wide in our statistical best XI? We looked at Adam Lallana’s stars from last season, compared to this season’s stats of Marcus Rashford, Jesse Lingard and Raheem Sterling.

Sterling has had a good goal scoring start to the season, as has Rashford as the two Manchester clubs take the League by storm. They are also the best two performers in the ‘successful take ons’ category, making 2.69 and 2.78 per 90 minutes, compared to just 1.23 of Lallana and 1.03 from Lingard. The pair are also very similar as in the amount of chances they create.

Statistically so far this season, they are England’s first choice wingers.

After winning the golden boot for the last two seasons, and scoring an impressive 13 goals in all competitions in the month of September alone, Harry Kane surely has to be England’s best striker?

The stats so far for the season aren’t as overwhelming as your would think in Kane’s favour. Leicester striker Jamie Vardy has a better Shot conversion rate, hitting the back of the net with 78% of his strikes, compared to just 53% of Kane’s attempts on goal. The Leicester man has also won the same amount of Aerial duels than the Spurs man (11).

Liverpool’s Daniel Sturridge has also created the same amount of chances as Kane (7) despite playing less than half the amount of games, showing he is playing as more of a team player for Jurgen Klopp’s side.

However, on balance, Kane is rightfully England’s first choice striker.

So there we have it. Here is statistically the best England XI during the early stages of this season.

Is it good enough to win the World Cup? Where is it weak? Who would you choose? Leave a comment below.