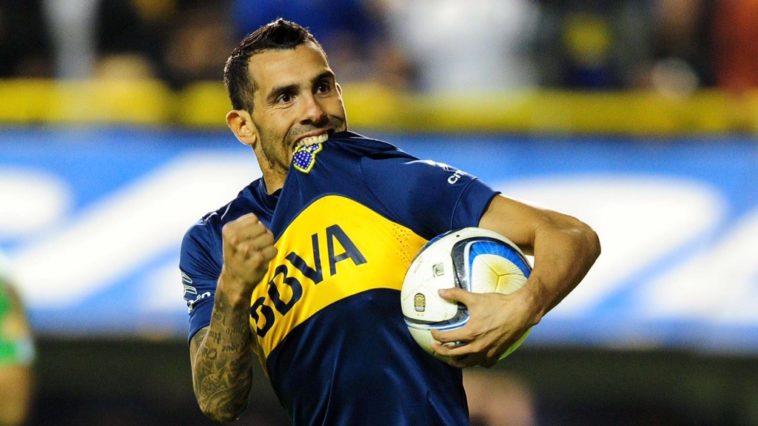 No, you haven’t been transported to the summer of 2006, West Ham want Carlos Tevez back at the club where he first made his Premier League bow.

West Ham stunned the world with their double signing of Argentine pair Carlos Tevez and Javier Mascherano, who helped them avoid relegation in the 2006/7 season.

The pair eventually left Upton Park, joining Manchester United and Liverpool respectively. Tevez has since moved to Manchester City, Juventus and back to his homeland to play for Boca Juniors.

Tevez has always claimed to have loved his time at West Ham, and in an interview with the Daily Mirror, West Ham owner David Sullivan has revealed that they offered the striker £150,000-a-week to re-sign for the club.

He’ll probably stay where he is now, but he doesn’t pay a lot of tax down there.
All this business ‘I love West Ham.’ Well, it’s ‘I love West Ham if they give me 250 grand a week.’ So how much love is that for West Ham?

I actually offered him 150 grand a week to come back plus bonuses.
I thought that was an incredible offer for someone who loves West Ham. It wasn’t a publicity stunt, I saw him being our No.1 striker.
I was hoping he would reproduce what he did at Juventus a year ago. He was a fantastic player. But where do you draw the line with what you are prepared to pay?

West Ham are looking to add a marquee signing ahead of their imminent move into the Olympic Stadium, and have been linked with a number of other attackers. They include Robin van Persie, Christian Benteke and Carlos Bacca, whereas any potential move for Tevez will seemingly depend on the striker lowering his wage demands.