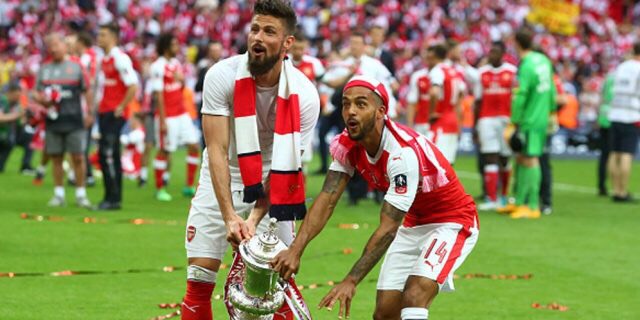 West Ham will make a £50m summer move for Arsenal duo Theo Walcott and Olivier Giroud according to reports.

The Daily Star claim that Slaven Bilic is preparing to make the big money move for the pair who are believed to be surplus to requirements at the Emirates ahead of the new season.

Both players suffered inconsistent seasons last term with Olivier Giroud having to make way for Alexis Sanchez at the point of the Arsenal attack.

He has been linked with a move away from the Premier League, with Ligue 1 clubs Marseille and Lyon thought to have an interest in signing the French striker.

However West Ham could be about to offer the striker the option to remain in the Premier League with a move from North to East London.

Arsenal are looking to improved their squad, with Kylian Mbappe being linked with a world record move to the Emirates. However Arsene Wenger could have to sell significantly to be able to afford the potential World Record move.

Alexis Sanchez is also another player thought to be on the way out of the club this summer. The Chilean has just one year remaining on his current deal at Arsenal and has been linked with a £50m move to Bayern Munich, with Man City also heavily interested in signing the star.

Should Arsenal cash in on the duo? Are they the players that West Ham need? Is £50m the right kind of fee? Leave your thoughts below.