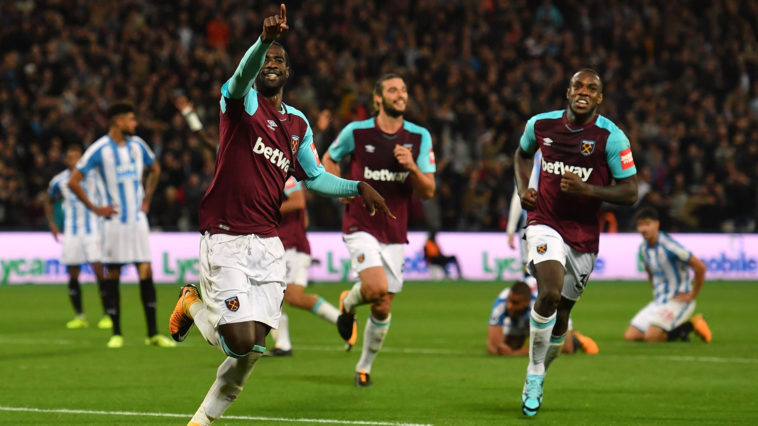 West Ham won and kept a clean sheet against Huddersfield last night, both firsts for the Hammers this season, whilst the result marked Huddersfield’s first loss of their inaugural Premier League campaign. Here are five takeaways from last night’s meeting.

The importance of Andy Carroll

It is traditional whenever Andy Carroll returns from injury for football writers to extoll the attributes he brings to West Ham United. These were once again on display last night, with Carroll playing at the centre of a front three alongside Michail Antonio and Javier Hernandez. This meant that West Ham had a direct option for attack, and a target for the impressive Antonio’s crosses, with Carroll winning 13 aerial duels, the most of any Premier League player in a single game this season. Also providing a dangerous cross just over a minute in, which Cheikhou Kouyate might well have turned in, and West Ham’s attack looks a lot more threatening.

Having lasted 82 minutes before substitution, fans and club staff alike will hope that West Ham will get a decent run out of Carroll this season.

Andre Ayew replaced Javier Hernandez in the 65th minute, a change greeted with boos and a chorus of ‘Getting Sacked in the Morning’. Dissenting voices were, however, silenced over the following 15 minutes. Ayew can claim credit for an assist for Pedro Obiang’s deflected opener, followed by his poacher’s effort from a corner which wrapped up the match for West Ham.

With Manuel Lanzini injured and Marko Arnautovic suspended for last night’s match, Slaven Bilic will be pleased that he can call upon a player on the bench who has now been directly involved in four goals in his last five Premier League games.

Bilic has since admitted that the earlier sacking of Frank de Boer weighed heavily on his mind going into last night’s crucial game. Finally playing in front of home fans, his team delivered a vital win that leaves only Bournemouth and Crystal Palace without any points. A visit to West Brom, followed by home fixtures against Bolton Wanderers in the Carabao Cup and Tottenham Hotspur in the league offer further opportunities for important wins to keep him in a job.

The successful decision to substitute Hernandez for Ayew, perhaps so as to get maximum value from corners, West Ham having 10, scoring from one, answers some doubts as to his tactical nous.

Though one game is hardly a guarantee of success, West Ham fans will nonetheless be encouraged by being able to celebrate late goals for once. Last night, the Hammers showed little sign of the cardiovascular problems which may have contributed to the number of late goals conceded, and points dropped, last season. Though Tom Ince hit the bar late on, which might suggest the closing stages of a game remain something of an issue, a clean sheet and overall control was a welcome sight for many. Furthermore, Joe Hart’s first clean sheet in 23 league games may provide a confidence boost for him following his miserable first three games between the sticks, galvanising him to further success this season.

Lessons to learn for Huddersfield

David Wagner was left lamenting his side’s shortcomings following their first league defeat this season. Huddersfield were often nervous in possession, needlessly losing the ball for throw-ins, or simply returning it to West Ham, on several occasions. Whilst the first goal was largely the result of an unfortunate deflection, the second was from a corner, where Andy Carroll’s movement caused their defensive shape to break down.

Though Huddersfield’s away form is now just two wins in seven, with four losses, Wagner and fans can take solace in what remains an impressive start to the season for a newly promoted side. For 72 minutes Huddersfield defended reasonably well, and but for some misfortune might have secured a point, or even a win. A disheartening result, but far from a proclamation of doom and gloom.