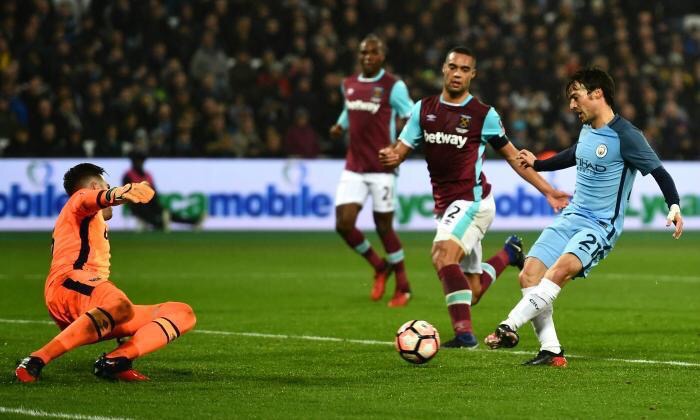 Manchester City put aside some of their recent struggles in the Premier League with a comfortable win against West Ham in the first game of the FA Cup third round at the London Stadium.

The opening exchanges of the match saw Manchester City dominate this Cup tie, seeing lots of the ball as West Ham got plenty of men behind the ball as they looked to frustrate the visitors.

Sergio Aguero came closest to breaking the deadlock. A corner from the Manchester City right was poorly cleared by the Hammers, and the Argentine hit a dangerous effort that was well saved by Adrian in the West Ham goal.

Then in the 32nd minute, Manchester City did manage to open the scoring. Makeshift defensive midfielder Pablo Zabaleta made a good run into the box and went down following a coming together with Angelo Ogbonna. It was a soft penalty, but a penalty nonetheless.

Yaya Toure stepped up and did what he did best, smashing the ball into the back of the net from 12 yards.

Moments after the opening goal, West Ham spurned a glorious opportunity to equalise. Antonio made a surging run down the left before unleashing a fierce shot that was smartly saved by City ‘keeper Willy Caballero. However the ball fell to the on rushing Feghouli who somehow put the ball wide of the open goal.

West Ham kept up the pressure on the Manchester City goal, racking up a number of corners as they tried to get back in the game, and it was from one of these corners in the 40th minute which brought the second goal of the tie. Bacary Sagna picked up the ball, played an excellent give and go with Sergio Aguero who laid the ball back to the full back who delivered a fine cross towards Raheem Sterling at the back post. The Englishman would have doubled the score if Havard Nordtveit hadn’t got a toe to the cross and tapped the ball passed his own ‘keeper to make it 2-0.

Moments later and the tie was over. More slick passing from Manchester City allowed Raheem Sterling to play a square ball across the box to David Silva, who had the simple task of tapping the ball past Adrian to make it 3-0 going into the break.

After the interval, City carried on where they left off. Sterling laid the ball off to Yaya Toure, whose first time effort was turned into the goal by the ever dangerous Sergio Aguero who lifted the ball over Adrian to make it 4-0. The goal also took him past Colin Bell into third place on the all time scoring records for the club.

The remainder of the second half was played with absolute comfort for the visitors with West Ham creating very little, and with 6 minutes remaining on the clock, Manchester City scored another.

A corner from the left found the head of £50million man John Stones who powered the ball goalwards only for it to be cleared off the line by Mark Noble, but the clearance was in vein as the Goal Decision System confirmed that it had already crossed the line to make it 5-0.

The result see’s Manchester City secure their spot in the fourth round draw of the cup, meanwhile, West Ham have now lost six games in their new home, which was practically empty at full time apart from the 9,000 travelling Manchester City fans.

Man of the Match – David Silva

The Spaniard bagged a goal in fine fashion and pulled the strings throughout before being replaced in the second half.