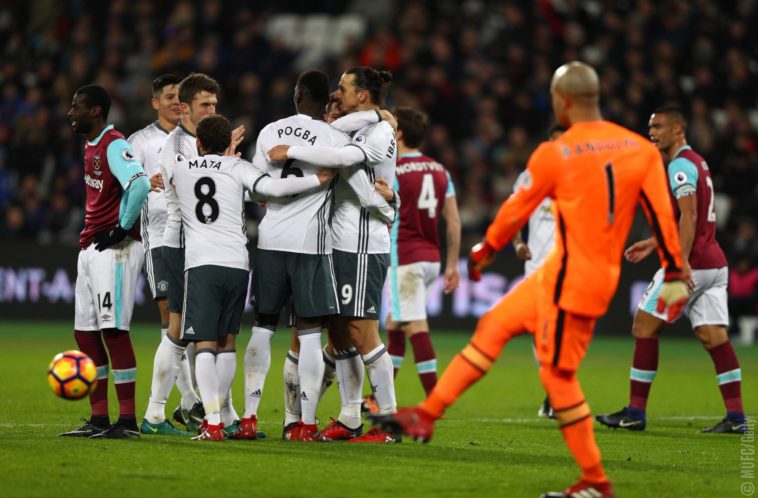 Manchester United extended their winning run in the Premier League to six games, but the game was overshadowed by controversial moments at the London Stadium.

Here, we shall look at five talking points from the game.

The general assumption of Mike Dean is that he is the ‘diva referee’ – he loves being in the spotlight and makes it all about him. This assumption once again came into debate when after 15 minutes into the match, Sofiane Feghouli was surprisingly dismissed for a challenge on Phil Jones. After over-running the ball, Feghouli desperately attempted to beat Jones to the ball, but ended up catching the latter as he got their first. It was a 50-50 challenge – indeed, Feghouli was off the ground, but it was not dangerous, and it seemed like he was trying to pull out. A yellow at most, but in no way was it a red. From there on then, it was always going to be a uphill battle for the hosts, especially after playing only 48 hours before.

The only thing that could have exacerbated the situation was another incorrect decision from the officials. With 12 minutes left to play, Ibrahimović sealed matters for United as he converted from an offside position. It was blatantly offside, the tempo of the move was not high and it was a really poor decision from the linesman. Ibrahimovic has now scored 18 goals in all competitions, and was rewarded for his form with the PFA Player of the Month award. However, in relation to the decisions in the game, this seasons standard of refereeing has been shambolic. In fact, it has got worse as the season has gone on. What can be done about it? Technology? Punishments such as not refereeing games for a few games? Who knows.

3. Mourinho gets his substitutions right once again

Jose Mourinho, in two successive matches, used Juan Mata and Marcus Rashford to help turn United’s fortunes around. In the game versus Middlesbrough, Mata provided the assist for Paul Pogba’s winner, whilst Rashford helped to inject some pace into the game. In the game versus West Ham, man of the match Rashford was mightily impressive. The game lacked tempo, there was no width as Lingard and Mkhitaryan came inside too early. When Rashford came on, he hugged the touchline as United targeted Nordtveit, who looked tired. The substitution worked wonders as Rashford assisted fellow substitute Mata give United the lead. Some say Mourinho has lost his magic and impetus to influence games, but he has proved those accusations wrong, especially in the last two games.

4. How high can United finish?

The win against West Ham has now moved United five points from second, and two points behind Arsenal in fourth. In all competitions, United have now won seven games in a row and have looked impressive. Currently 10 points behind leaders Chelsea (who play Spurs on Wednesday night), the league is most probably out of reach. Chelsea look too strong and may not drop that many points based on current form. But there is no reason why United cannot continue their surge and comfortably make top 4.

After an impressive debut season under Slaven Bilic, West Ham have been disappointing this season. This was a team that troubled the majority of the top six last season, especially in away games. Dimitri Payet was sensational last season but his influence has diminished a little this season. With Europe out of the question this season, it seems that West Ham fans will have to settle for a mid-table finish this season.

Leave your comments in the box below and remember to share this article on social media.