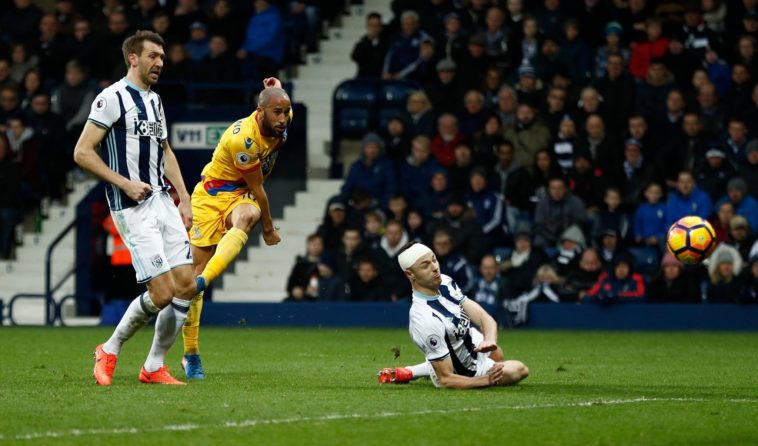 Two second half strikes from Wilfried Zaha and Andros Townsend meant that Crystal Palace put some daylight between themselves and the bottom three and won back to back Premier League games for the first time since September.

Both sides were unchanged their last match. The first half intensity was high, both sides knew the importance of picking up points.

Despite the high intensity, the first half had very few chances. The best chance fell to Christian Benteke. He was found unmarked from a Yohan Cabaye corner. However, his header was cleared off the line by Chris Brunt.

Later in the half, West Brom manager Tony Pulis appealed for a penalty after Cabaye looked to trip Solomon Rondon. Referee Mike Jones waved it away. Replays suggest that there was minimal contact and Rondon went down easily.

The second half began with a flurry of activity. Both sides trying to score the opening goal.

It was the away side that did just that after 55 minutes. Cabaye found Zaha on the edge of the West Brom penalty area. Zaha beautifully chested the ball beyond Brunt before smashing it beyond Ben Foster into the bottom left hand corner from 12 yards out.

Zaha could have doubled his and Palace’s lead moments later. After weaving through several West Brom defenders, found himself through on goal. West Brom keeper Foster rushed out and smothered the ball away from Zaha. The loose ball fell to Palace captain Jason Puncheon whose shot went wide.

Then the moment of the match. Townsend pIckes the ball up inside his own penalty area. Dribbling down the left hand side of the pitch, shrugging off West Brom defenders as he ran. A step over fooled Brunt before Townsend unleashed a fantastic shot from inside the area which found the bottom corner to secure all three points.

Palace goalkeeper Wayne Hennessey was rarely tested throughout the match. Palace deserved the points and need to pick up as many points as possible in these types of games if they are to have any chances of a fifth straight consecutive season in the Premier League.

A tough one to pick. Mamadou Sakho again played absolutely brilliantly and ensured Palace achieved back to back clean sheets for the first time in 16 months. Having said that, Andros Townsend gets my vote after running himself into the ground for the full 90 minutes and scored a delightful goal to top it all off.