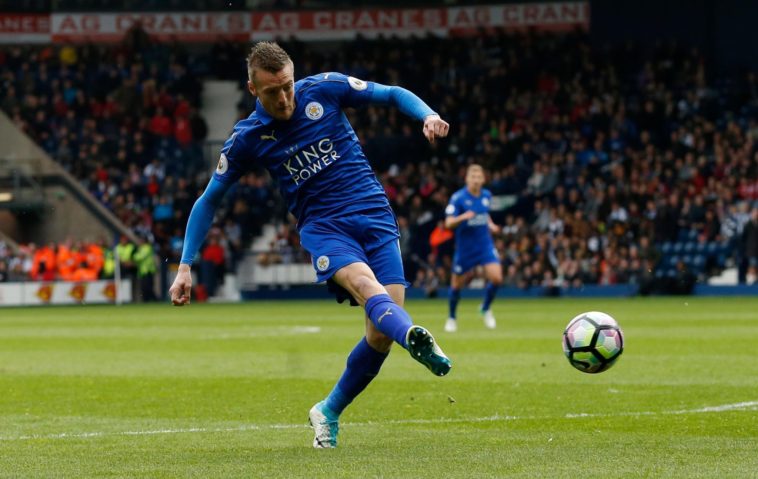 Leicester City all but secured safety in the Premier League with a scrappy victory at The Hawthorns.

A solitary goal from the Foxes top scorer Jamie Vardy just before half time was enough for all three points and lift Leicester up to the dizzy heights of 11th place.

For the Baggies, they set a new unwanted club record of fice consecutive games without scoring, as their season continued to peter out.

The match began in a competitive manner but both sides struggled to keep the ball, hardly surprising for two of the league’s least possession based sides.

Chris Brunt had the best opportunity to open the scoring but his header back across goal was tipped over by Danish stopper Kasper Schmeichel.

Chances were at a premium until Salamon Rondon inexplicably played the ball into the path of Shinji Okazaki.

The Japanese attacker then slotted a first time ball through to Vardy, who lifted it over the oncoming Ben Foster to give the Foxes the lead in the 43rd minute.

Rondon is on a barren spell in front of goal, 17 matches without a goal. His terrible backpass is not likely to have helped appease those who may have already been on his back.

With the Baggies needing to apply the pressure in the second half to get back into the match, it was actually Leicester who looked more likely to score.

Okazaki was inches from connecting with Vardy’s low cross just after half-time whilst Riyad Mahrez hit the side netting after trying to catch out Foster at his near post.

James Morrison headed straight at Schmeichel and Craig Dawson saw a goal-bound header deflect of his own player’s head, out for a goal kick.

Leicester held on for a hard fought but comfortable victory to pick up only their second away win of the season.

Meanwhile, Tony Pulis’ side continue to struggle and their top 8 finish looks in doubt with a host of clubs, including Leicester, hot on their heels.