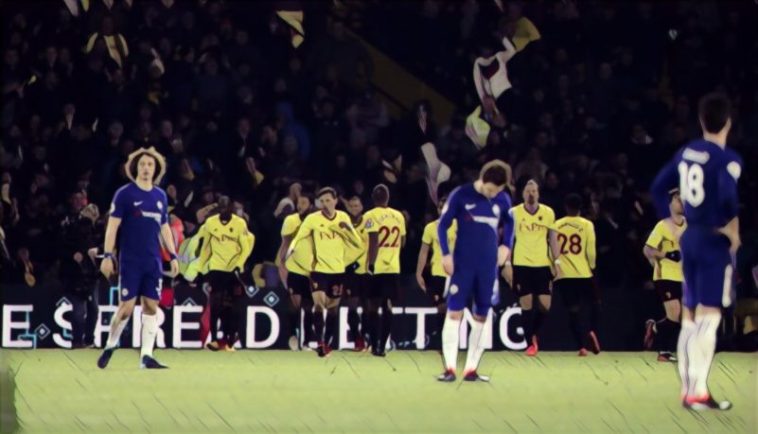 Made a couple of tidy stops. Had no chance for Hazard’s goal.

Solid in defence and composed in possession.

Had a quiet enough night against a poor Chelsea attack, although he did well late on against Giroud.

Defended well and his long throw was a useful weapon for his side going forward.

Got forward brilliantly all night, and capped a excellent display off with a wonderfully taken individual goal.

Did a top class job as Watford’s defensive screen in midfield.

A beast. Dominated the centre of the park from start to finish.

Stood up to the threat of Moses well, and got forward when he could.

Superb. Won the penalty for the opener, assisted the second, and then scored the all important third goal on the break late on.

Has struggled in recent months, but looked back to his razor sharp best tonight, was a constant menace down the left.

Tucked away the opener from the penalty spot and lead the line brilliantly.

Finished the game off with a superb finish in injury time.

Made a string of decent saves, although it was his misjudgement that conceded the penalty, when he took down Deulofeu just before half-time.

Had a off night for once, and was given the run around by Richarlison at times.

Sloppy in possession and booked for a petulant kick out, will probably find himself back on the subs bench after tonights display.

Not his fault he’s not John Terry, but still did little to galvanise his team as you would expect from a Chelsea captain.

Worked hard, but was pushed further and further back by Watford’s excellent high press.

Nowhere near as sharp as he usually is.

A disaster. Can’t tackle, can’t pass and can’t control the ball. Sent off after a half hour for two bookable offences.

Showed a decent turn of pace on occasion, but like most of his team-mates just never really got going.

Slashed at a decent chance early on from close range, and was then subbed as part of a tactical reshuffle after Bakayoko’s sending off.

Produced a moment of brilliance when he powered home from 3o yards, that looked like it would get his team a undeserved draw. Apart from that struggled to get on the ball for most of the game.

Failed to create much of note, and did little to stop Watford’s midfield domination.

Tried to put himself about up front, but was given little quality service.