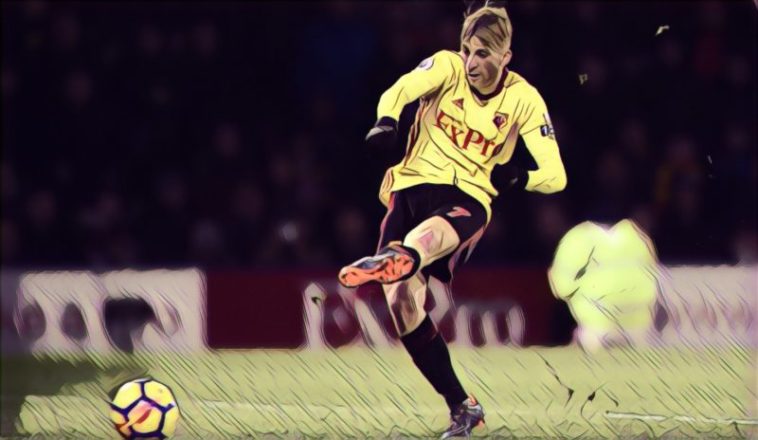 Watford fired four goals into Chelsea’s sinking ship in a 4-1 victory for the Hornets at Vicarage Road on Monday.

A disastrous start for the Blues spelled an early end for Tiémoué Bakayoko, earning two yellow cards before the 30 minute mark. Watford’s high press caused a lot of problems for the Blues in possession. By the final whistle, it seemed as if the players had given up on the match, and their manager, who may have coached Chelsea for a final time.

Eden Hazard brought some hope to Chelsea fans after he levelled the score at 1-1, but that feeling only lasted two-and-a-half minutes before Daryl Janmaat helped Watford retake the lead for good.

Here are five things we learned from Chelsea’s humiliating loss to Watford.

Antonio Conte asked for a vote of confidence from the club amid rumours of managerial changes and bad blood with the board. After the performance against Watford, it wouldn’t be shocking if he was to be sacked.

Chelsea’s squad is expected to achieve so much more considering the market value of the players, and they are heavily underperforming. The fault lies with the manager who isn’t getting the best out of his team.

It hurts to say this considering the magic of last season. Conte helped bring joy back to Stamford Bridge after a disgraceful 10th-place finish. Fans were proudly singing his name until their voices became hoarse. Now, the honeymoon phase is over.

Conte’s insistence on using the same tactics is killing the team, and the same people who gleefully sang his name are now tired of the same broken routine. Chelsea are constantly falling apart when pressed, giving up possession in the worst of spots. Their passing only leads to scoring chances for the other team. Even when going down to 10 men, the tactics stayed the same.

If Conte somehow manages to keep his job past Tuesday, he needs to seriously rethink how to make his team play for the next match against West Brom.

Gone are the days where teams would sit back against Chelsea in fear of giving up space to the quick attackers. They’ve figured out that Chelsea are fragile.

Watford’s pressing caused Chelsea to commit many errors in their own half. Whenever Chelsea tried to make a short pass, there would be a yellow shirt nearby to cause some mayhem. That pressure led to misplaced passes and heavy touches from Bakayoko, leaving him to lunge once he lost the ball. That pressure led to Gerard Deulofeu earning a penalty after a panicked Thibaut Courtois came off his line, tripping the winger in the process.

This shouldn’t be new for Chelsea to go up against. The Blues were always susceptible to a high press, and Arsenal figured it out in the FA Cup final last season, and they’ve kept using it in every match against Chelsea since. Other teams are starting to figure it out and using pressure to full effect.

The home team did back off a bit, leading to Hazard’s equalizing goal, but they continued to march forward and dominate the game until the final whistle.

Despite having no other healthy center forward, Olivier Giroud was on the bench for Chelsea as expected, and not in the starting XI. Conte already told reporters that Giroud and Emerson were not ready to start after only just being transferred to the club.

You can take a quick look around the Premier League and see what new transfers have done for their respective teams. Alexis Sanchez has scored for Manchester United, Henrikh Mkhitaryan got three assists in his debut for Arsenal, and Pierre-Emerick Aubameyang scored for the Gunners in his first match for them. Even Deulofeu, on loan from Barcelona, made a huge contribution to Watford in his start against Chelsea.

However, Chelsea still refuse to start their new signings, even though the Blues desperately need fresh faces in the lineup. Some blame goes to Conte whose stubbornness is choosing to misuse Hazard as a false 9/focal point of the attack. Giroud’s constant presence in the box could have made a difference in the match, and his substitution was too late into the match to make a difference.

Some blame could also go to the club for avoiding big transfers of elite players that would warrant a starting spot straight away. Surely someone like Alex Sandro – who was allegedly available – would have started for Chelsea right away. Transfers of Ross Barkley, Emerson, and Giroud don’t scream world-class, and Chelsea need some world-class upgrades.

Confidence at an all-time low for Bakayoko

A few months ago, the midfielder dyed his hair blue in honour of scoring his first goal for Chelsea. Now, he is the subject of a lot  negative comments -and I’m putting that lightly -from fans on social media.

Bakayoko didn’t fit in a 3-5-2 where he was tasked with transitioning from defence to attack. He surely doesn’t fit the role now in a midfield duo with N’Golo Kanté.

Bakayoko’s role at AS Monaco was a midfield destroyer. His job was to recover possession for his team and get it to someone who can start an attack. At Chelsea, he’s expected to do more outside of his usual skillset. At Chelsea, I’d say he’s being used in the wrong role.

Last season, Chelsea generally played with a midfield duo of Kanté and Nemanja Matic. Matic was also never one of those players who could move the ball up the field. Instead, Kanté was the one who helped move the attack up to the forwards up front, all while tackling in the midfield.

While Matic has more experience than Bakayoko, the Frenchman could play in the same role as the former Chelsea midfielder. Instead, I’m left confused as to why he’s not playing in a role made for him. I’m left watching his confidence sink lower and lower as Chelsea fans lose patience for his mistakes on the ball.

See you in a week

Dating back to mid-November, Chelsea have played in 23 matches without a seven-day break or more in between each of them. Their next match is finally a week away against West Brom on Monday.

The rest is surely welcomed. Marcos Alonso didn’t featured in the game against Watford. Chelsea were concerned with his playing time and wanted him to take a break.

This stretch of matches also left The Blues with a pile of hamstring injuries, with Andreas Christensen and Ross Barkley being the latest victims. A week off will be good for the physical health of the players, and hopefully their mental health, as they will have a longer time to prepare for the next match.