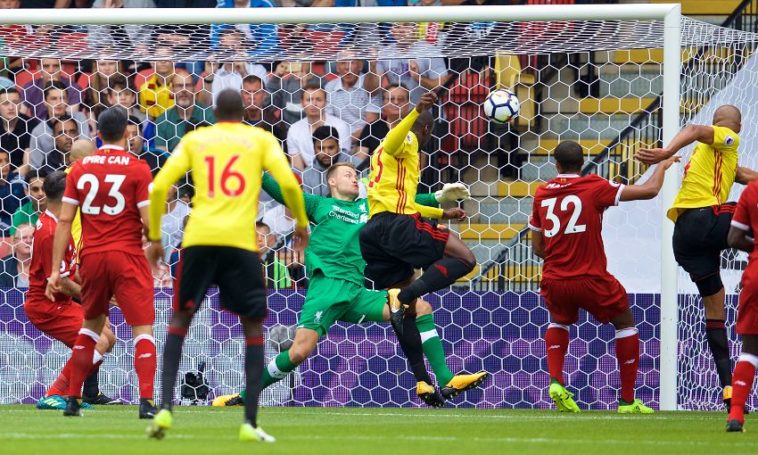 The first Saturday game of the Premier League season kicked off with an exciting 3-3 draw. See how it unfolded with our match report.

With English trio Clyne, Sturridge and Lallana out injured Liverpool had to make some changes in midfield. Coutinho also missed the game with a “back injury”. 18-year-old Alexander-Arnold was given a big chance at right back whilst Can and Wijnaldum come in for Lallana and Coutinho.

Just seven minutes in to the match Watford were presented with the first chance of the game. Pereyra had a shot at goal which Mignolet parried for a corner. The resulting corner comes in and the big man Okaka is given the freedom to head in from just yards out. Liverpool’s zonal marking was all over the place.

Daryl Janmaat’s season didn’t get off to go a good start as he was forced off by injury in the 17th minute. Unlucky for the Dutchman but new signing Femenia came on to replace him and is given a chance to impress.

Half an hour in and Liverpool had been pretty woeful, but a moment of brilliance from Sadio Mané brought Liverpool level. Moreno got a ball in to Emre Can, who delicately flicked the ball behind the Watford defence for Mané to run on to. Mané then curled the ball fantastically in to the top left corner, Thierry Henry-esque.

Just two minutes later though, Watford restored their lead with another bit of comical Liverpool defending. Cleverley crossed the ball in from the right which sent the Liverpool defence sliding wildly. After the ball rebounded off two Liverpool players it found its way to Doucore who smashed in from close range.

Half-time saw the Watford players go off 2-1 up and much happier as they had been largely the better team.

Three minutes in to the second half Watford were unlucky once again as they suffered their second injury of the game. Pereyra was replaced by new signing Richarlison.

Liverpool started the second half looking like a completely different team and their efforts were rewarded in the 54th minute. Salah sprinted in to the box and got a touch on the ball before Gomes brought him down. Firmino took the resulting penalty and struck it hard in to the bottom left, 2-2.

Just three minutes later Liverpool had turned the game on its head. Lovren chipped a ball over the Watford defence which Firmino chipped over the onrushing Gomes. The ball was heading in to the goal but Salah tapped home to make sure. A debut goal by Salah made it 3-2 Liverpool.

However, just when the game seemed over, Liverpool produced some more embarrassing defending. Joe Gomez who had come on for the impressive Alexander-Arnold gave away a foul out wide. The resulting free-kick was cleared, but only to a Watford player who forced Mignolet to push a shot wide. The resulting corner was whipped in to the near post, Wijnaldum missed a header and Mignolet palms in on the post. Britos is alert and taps in dramatically to make it 3-3!

The first game of the new Premier League season saw Arsenal win 4-3 at home to Leicester and it’s fair to say neither team impressed defensively. The Arsenal defence looked like they’d never played together whilst Leicester didn’t have an answer to the Arsenal attack.

That trend continued in to this game as the Liverpool defence made things much easier than it should have been for Watford. With Liverpool failing to sign a new centre back and Moreno surprisingly reinstated at left back they were all over the place.

All afternoon Liverpool failed to deal with balls in to the box especially from corners. Watford overpowered the Liverpool defence leaving them looking weak and nervous.

On the other hand Watford struggled to deal with the Liverpool front three. Mané and Salah looked dangerous down the wings with Firmino linking it all together. One of the few positives for Liverpool as the front three seems to link-up well.

Man of the Match: Mohamed Salah