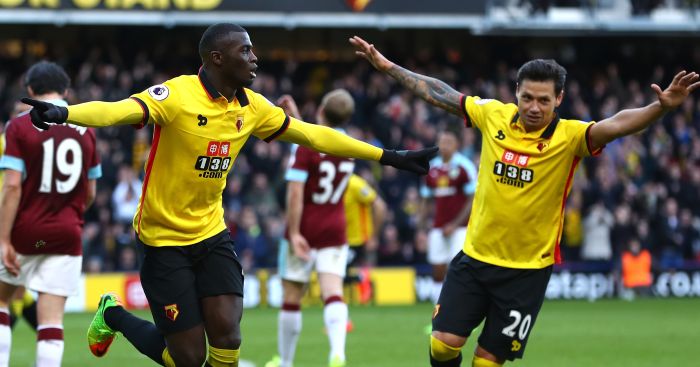 First-half headers from Troy Deeney and January signing M’Baye Niang were enough for the Hornets to seal a 2-1 win at Vicarage Road and build on their stunning win at Arsenal in midweek.

Burnley played the majority of the game a man short after midfielder Jeff Hendrick was sent off after just six minutes.

Ashley Barnes’ penalty gave the Clarets hope but they have now claimed just one point from a possible 33 on the road, with only Sky Bet Championship strugglers Rotherham winning fewer away points in the top four divisions this season.

Deadline-day signings Ashley Westwood and Robbie Brady were named on the Burnley bench while Watford made two changes from their last game.

Mauro Zarate, who made his debut following suspension, and Jose Holebas started in place of Miguel Britos and Daryl Janmaat and Holebas would play a crucial role in the turning point of the match.

After a quiet opening, the visitors were reduced to ten men after six minutes. Referee Michael Oliver dismissed Hendrick for a reckless two-footed challenge on Holebas. The Watford defender momentarily hobbled off but returned to the field, much to the dismay of the Burnley supporters.

Burnley’s afternoon went from bad to worse four minutes later. Niang cut in from the right flank and floated a beautiful cross onto the head of Deeney, who out-muscled Clarets defender Matt Lowton at the far post.

Niang, who has been impressive since his arrival from AC Milan last week, threatened again but Burnley goalkeeper Tom Heaton pulled off a brilliant save to keep out the Frenchman’s 20-yard curling effort.

The Clarets were presented with a rare chance to equalise after Valon Behrami brought down George Boyd on the edge of the area, but Watford goalkeeper Heurelho Gomes tipped Boyd’s free-kick over the bar.

At that point, the visitors looked to have survived Watford’s onslaught but their slim chances of claiming a draw took a killer blow on the stroke of half-time. Niang leapt highest to get the deftest touch on Holebas’ cross and double the lead.

Clarets boss Sean Dyche sent on Brady in the 55th minute for his debut in hope of rejuvenating his side but the tempo dropped in the second half, with Watford happy to keep possession and maintain their lead.

Barnes had a claim for penalty denied after 67 minutes as Sebastian Prodl looked to have put his arm into the striker’s path. Heaton was on hand to pull off another great save at the other end to deny Deeney, whose outstretched boot connected with Niang’s cross.

However, the Burnley penalty inevitably came, when Joey Barton’s powerful strike struck the hand of Sebastian Prodl in the penalty area. Ashley Barnes stepped up to take the penalty, and he buried it past the helpless Heurelho Gomes. This then set the home side up for a nervy remaining 20 minutes.

In the dying stages of the game, Watford talisman Troy Deeney thought he secured the three points for the home side, but his goal was rightfully disallowed for handball.

Burnley then nearly grabbed a late equaliser. Craig Cathcart mare a mistake which led to substitute Sam Vokes obtaining the ball just outside the penalty area. The striker was beating straight down on goal but he scuffed his effort wide.

The referee then blew his whistle, much to the delight of the Watford faithful, and Watford move up to 10th place while Burnley go into 12th place.